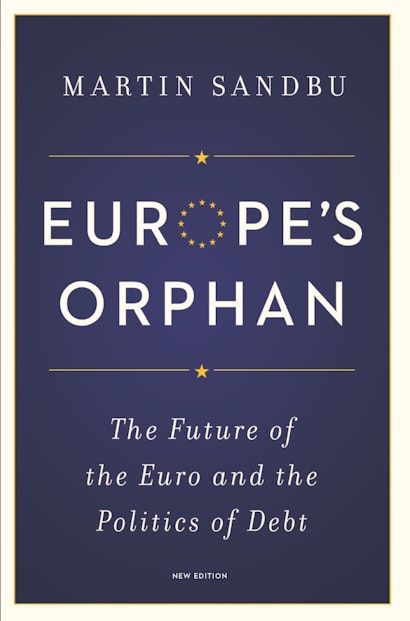 Originally conceived as part of a unifying vision for Europe, the euro is now viewed as a millstone around the neck of a continent crippled by vast debts, sluggish economies, and growing populist dissent. In Europe’s Orphan, leading economic commentator Martin Sandbu presents a compelling defense of the euro. He argues that rather than blaming the euro for the political and economic failures in Europe since the global financial crisis, the responsibility lies firmly on the authorities of the eurozone and its member countries. The eurozone’s self-inflicted financial calamities and economic decline resulted from a toxic cocktail of unforced policy errors by bankers, politicians, and bureaucrats; the unhealthy coziness between finance and governments; and, above all, an extreme unwillingness to restructure debt.

Sandbu traces the origins of monetary union back to the desire for greater European unity after the Second World War. But the euro’s creation coincided with a credit bubble that governments chose not to rein in. Once the crisis hit, a battle of both ideas and interests led to the failure to aggressively restructure sovereign and bank debt. Ideologically informed choices set in motion dynamics that encouraged more economic mistakes and heightened political tensions within the eurozone. Sandbu concludes that the prevailing view that monetary union can only work with fiscal and political union is wrong and dangerous—and risks sending the continent into further political paralysis and economic stagnation.

Contending that the euro has been wrongfully scapegoated for the eurozone’s troubles, Europe’s Orphan charts what actually must be done for the continent to achieve an economic and political recovery.

This revised edition contains a new preface addressing the economic and political implications of Brexit, as well as updated text throughout. Europe’s Orphan charts what actually must be done for the continent to achieve a full recovery.

Martin Sandbu has been writing about economics for the Financial Times since 2009. Formerly the newspaper's economics leader writer, he currently writes the newspaper's Free Lunch premium economics newsletter. Previously, he was a senior research fellow at the Zicklin Center for Business Ethics Research at the Wharton School of the University of Pennsylvania. He is the author of Just Business: Arguments in Business Ethics.

"Well-written and closely argued,Europe's Orphanought to delight the smarter supporters of European integration and will challenge some long-held assumptions of their euroskeptic opponents, not least the perception that the currency union has gnawed away at the international competitiveness of the eurozone's weaker economies."—Andrew Stuttaford, Wall Street Journal

"Books that attack the conventional wisdom are refreshing. They force us to rethink. That is what Martin Sandbu'sEurope's Orphandoes—and what makes it stand out in the increasingly crowded field of eurocrisis analysis. . . . [S]timulating and important."—Paul De Grauwe, Financial Times

"[A] stimulating and entertaining book. . . . [Sandbu] has performed a public service by challenging the present dreary consensus on the fate of the euro and, in his final chapter, by reminding us what the single currency was for."—Richard Lambert, Prospect

"Financial Times writer Sandbu (Just Business) looks past current headlines to the ideals and realpolitik strategy behind the Eurozone, arguing that it remains Europe's best hope for preserving global relevance. . . . The book cogently explains why scapegoating the euro for Europe's economic and political disunity is nonsense."—Publishers Weekly

"A highly intelligent, thought-provoking book, to be read by anyone who follows contemporary macroeconomic policy."—Tyler Cowen, Marginal Revolution

"Martin Sandbu's book is a robust and generally well-informed critique of the handling of the euro-area crisis."—Patrick Honohan, Irish Times

"[A] valuable recent book on the Euro crisis."—Arthur Goldhammer, The American Prospect

"A spirited defense and a thoughtful reinterpretation of the eurozone's unpromising recent history."—Mark Harrison, Enterprising Investor

"Thanks to the economic crisis that threw a quarter of the eurozone's youth into unemployment and poisoned its politics, it seems the euro has few friends left. In this fascinating book, Martin Sandbu salvages the shipwreck of monetary union from the blunders of its political leaders. He argues persuasively that the problem lay not with the euro itself but with the decision to avoid sovereign bankruptcy. Sandbu exposes for Europe's policymakers the uncomfortable truth that the fault was not in their stars, but in the choices they made."—Dani Rodrik, Harvard University

"An extremely original take on the eurozone crisis, Europe's Orphan boldly tackles the conventional wisdom that the common currency is a disastrous halfway house. Europe's woes do not lie in its weak central institutions, but in its poor macroeconomic framework and moralistic resistance to debt write-downs. With better policies, Martin Sandbu argues, the eurozone can thrive in its current form. Indeed, the UK should stop gloating and join. Brilliant and profoundly provocative, Sandbu's book will surely influence the debate on the future of Europe."—Kenneth Rogoff, Harvard University and coauthor of This Time Is Different

"With its novel interpretation of events and policies, Europe's Orphan offers a refreshing discussion of the recent financial crisis in Europe and the failed attempts to solve it."—Thorsten Beck, Cass Business School, City University London

"This is a timely book with a striking message. It argues that the apparent failure of the euro can be attributed to specific policy mistakes rather than inherent weaknesses, and that those mistakes could be set right, saving the single currency."—Diane Coyle, author of GDP: A Brief but Affectionate History

"Discussing the eurozone crisis, Europe's Orphan contends that the euro was not the culprit and if anything, the crisis would have been worse without it. It is a gutsy and provocative work."—Ugo Panizza, Graduate Institute of International and Development Studies

"With an unconventional perspective and new information, Sandbu provides a powerful, consistent, and comprehensive overview of the eurozone crisis. Telling the story as a clash between creditors and debtors that inevitably becomes ever more bitter, this lively account will interest a wide audience."—Harold James, author of Europe Reborn: A History, 1914–2000