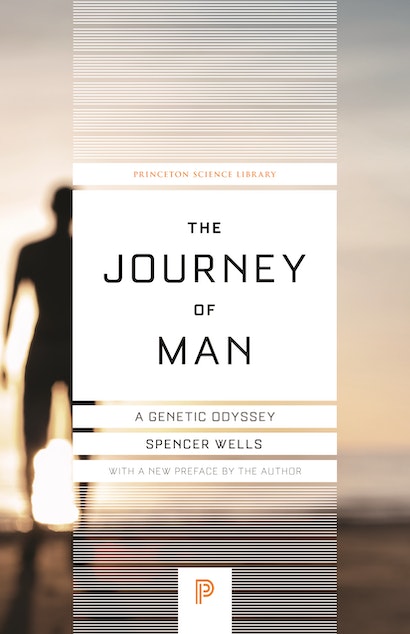 Around 200,000 years ago, a man — identical to us in all important respects — lived in Africa. Every person alive today is descended from him. How did this real-life Adam wind up father of us all? What happened to the descendants of other men who lived at the same time? And why, if modern humans share a single prehistoric ancestor, do we come in so many sizes, shapes, and races?


Showing how the secrets about our ancestors are hidden in our genetic code, Spencer Wells reveals how developments in the cutting-edge science of population genetics have made it possible to create a family tree for the whole of humanity. We now know not only where our ancestors lived but who they fought, loved, and influenced.


Informed by this new science, The Journey of Man is replete with astonishing information. Wells tells us that we can trace our origins back to a single Adam and Eve, but that Eve came first by some 80,000 years. We hear how the male Y-chromosome has been used to trace the spread of humanity from Africa into Eurasia, why differing racial types emerged when mountain ranges split population groups, and that the San Bushmen of the Kalahari have some of the oldest genetic markers in the world. We learn, finally with absolute certainty, that Neanderthals are not our ancestors and that the entire genetic diversity of Native Americans can be accounted for by just ten individuals.


It is an enthralling, epic tour through the history and development of early humankind — as well as an accessible look at the analysis of human genetics that is giving us definitive answers to questions we have asked for centuries, questions now more compelling than ever.

Spencer Wells is an entrepreneur and an adjunct professor at the University of Texas. He is the author of Deep Ancestry and Pandora's Seed.

"The Journey of Man is a book that should be read, for undeniably the story Wells reveals will transform our understanding of ourselves."—Tim Flannery, , New York Review of Books

"Spencer Wells chronicles the history of genetic population studies, starting with Darwin's puzzlement over the diversity of humanity he saw first-hand from the deck of the Beagle, and ending with the various attempts to classify human variation on the basis of different political and social agendas."—Rebecca Cann, , Nature

"The Journey of Man is fascinating and oozes charm. . . . [It] is packed with important insights into our history and our relationships with each other. . . . Who needs literature when science is this much fun?"—Chris Lavers, Guardian

"The Journey of Man is the best account available of the story of human origins and dispersals."—Colin Renfrew, Times Higher Education Supplement

"Fortunately for the lay reader, Wells has a knack for clear descriptions and clever analogies to help explain the intricacies of the science involved. Both entertaining and enlightening."—Library Journal

"Wells does an excellent job of making complex scientific data accessible and weaves a tapestry of physical anthropology and archaeology as well as linguistics and, of course, genetics to piece together the rise of the agricultural society, the interrelations between far-flung languages, and the eventual settlement of humans into virtually every corner of the globe."—Elise Proulx, East Bay Express

"Written with much verve, easy to read, and up-to-date on many important developments."—Luigi Luca Cavalli-Sforza, Stanford University, author of The History and Geography of Human Genes and Genes, Peoples, and Languages.

"Spencer Wells, whose genetic work has contributed to our understanding of human prehistory, has provided the lay reader with an account of the spread and mixing of the human species from its origin in Africa that is both scientifically accurate and accessible to the nonscientist. In achieving that accessibility, he has not made the common error of confusing simple explanations with simplistic ones. Most important, Wells has the intellectual integrity, all too rare in popularizations of science, to distinguish what is really known from what is only speculation."—Richard Lewontin, Harvard University, author of It Ain't Necessarily So: The Dream of the Human Genome and Other Illusions.