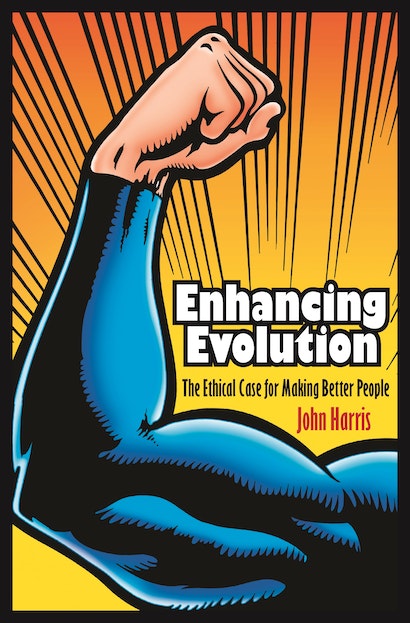 In Enhancing Evolution, leading bioethicist John Harris dismantles objections to genetic engineering, stem-cell research, designer babies, and cloning and makes an ethical case for biotechnology that is both forthright and rigorous. Human enhancement, Harris argues, is a good thing — good morally, good for individuals, good as social policy, and good for a genetic heritage that needs serious improvement. Enhancing Evolution defends biotechnological interventions that could allow us to live longer, healthier, and even happier lives by, for example, providing us with immunity from cancer and HIV/AIDS. Further, Harris champions the possibility of influencing the very course of evolution to give us increased mental and physical powers — from reasoning, concentration, and memory to strength, stamina, and reaction speed. Indeed, he says, it’s not only morally defensible to enhance ourselves; in some cases, it’s morally obligatory.


In a new preface, Harris offers a glimpse at the new science and technology to come, equipping readers with the knowledge to assess the ethics and policy dimensions of future forms of human enhancement.

John Harris is the Lord David Alliance Professor of Bioethics at the University of Manchester School of Law, joint editor-in-chief of the Journal of Medical Ethics, and a member of Britain's Human Genetics Commission. His many books include On Cloning and Clones, Genes, and Immortality.

"John Harris...assumes not only that biotechnological enhancement is going to happen but that we have a moral obligation to make it happen."—Scientific American

"This provocative book is a valuable retort to those who would summon the ghost of Frankenstein's monster at the first sight of a test tube."—Stephen Cave, Financial Times

"A persuasive case that today's biotechnologies...are on the continuum of an age-long pursuit by humans to improve themselves."—Judy Illes, Nature

"[A] fine contribution to clear thinking and cogent argument in a field where these commodities have been in short supply."—Arthur Schafer, The Globe and Mail

"[Harris] is warmly enthusiastic about the possibilities; moreover he is unshakably convinced that all human beings, given that they are capable of moral sense, have a duty not only to make things better for people, but to make people better as well....It is a pleasure to read a book that is so jolly about the future of mankind."—Mary Warnock, THES

"[Harris] raises the stakes. Harris argues that humanity has been evolving biologically for millennia, and that those who believe we should forego the opportunity to evolve further through the use of genetic technology are 'making a fetish of a particular evolutionary stage."—Richard Hayes, The American Interest

"Harris has a much wider understanding of enhancement than most bioethicists . . . he calls attention to the idea that there must be a new phase in human evolution so that darwinian evolution is replaced by a deliberately chosen process of selection—namely, enhancement."—John Collins Harvey, Journal of the American Medical Association

"This eleven-chapter book is a major contribution to the debate on enhancement. . . . Written with Harris' characteristic clarity and verve, the book is provocative, engaging, and at times entertaining. . . . Enhancing Evolution is bioethics at its best. It is scientifically well-informed, with imaginative examples, incisive critiques of widely held views against enhancement, and persuasive arguments in favor of these interventions. . . . Harris has hit a powerful volley against those who have argued that human enhancement is morally objectionable. The ball is now in their court."—Walter Glannon, Cambridge Quarterly Healthcare Ethics

"Enhancing Evolution represents something of a landmark volume in its systematic consideration of human enhancement both as a philosophical concept, and in terms of the emerging technological possibilities and consequences. It has at its heart some unashamedly utilitarian assumptions, with the aim of 'making the world a better place'."—Sarah Chan, EMBO Reports

"Harris' plea for enhancement is not only provoking. It is really thought-provoking since it demonstrates how deep the philosophical issues are and that we have to address them if we want to make explicit all the metaphysical, meta-ethical and ethical premises all participants in the debate rely on. But without such philosophical reflection a serious and fruitful discussion will not be possible. It is among the merits of this extraordinarily well written book to make this visible."—Michael Quante, Medicine, Health Care and Philosophy

"Whether one looks upon biotechnology with hope, fear, or a little of both, Enhancing Evolution is a book that should not be ignored."—Human Reproduction and Genetic Ethics

"John Harris has an enormous reputation in bioethics for his adroit, acerbic, dead-on argumentation, his ingenuity at undermining familiar but flaccid argument, his immense imaginative capacities, and his skewering wit. These are rare qualities in an often goody-goody field like bioethics, and his intellectual skills earn him real respect. His philosophical work is an exploration, as he puts it, of our shared responsibility to make the world a better place. Enhancing Evolution is an ample demonstration of this work at its best."—Margaret P. Battin, University of Utah

"John Harris can be depended on to sharply challenge conventional thinking in bioethics, especially when that thinking takes a conservative cast. He does not disappoint here. Harris shows how deep-seated a part of human history enhancement is and how weak most objections to it are; indeed, he makes a persuasive case that it is not only generally morally permissible, but often morally required."—Dan W. Brock, director of the Division of Medical Ethics, Harvard Medical School

"John Harris's writings are always provocative as well as superbly reasoned. In this latest book, he succeeds in demolishing the arguments of those who claim that enhancements are a threat to humankind."—Ruth Macklin, Albert Einstein College of Medicine

"Enhancing Evolution is a pleasure to read and an important contribution to bioethics. Against writers such as Leon Kass, Michael Sandel, and Jürgen Habermas, John Harris argues for using genetic and other technologies to improve and extend human life, and even to design and clone humans. Whether or not one shares his optimism that humans are wise, prudent, or moral enough to use technology to benefit humankind, his cogent and elegantly expressed arguments must be taken seriously."—Bonnie Steinbock, University of Albany

"Over his illustrious career, John Harris has explored the most challenging bioethical questions with insight, engaging wit, and eloquence. In Enhancing Evolution, Harris does it again. He argues that it is not just an option but an obligation for people to use available biomedical technologies to enhance their own—and their children's—physical and mental abilities. Harris rightly deserves his reputation for fearlessly following his ethical arguments wherever they lead."—Ezekiel J. Emanuel, M.D., Ph.D.

"Full of witty arguments, Enhancing Evolution is a powerful response to concerns about human enhancement and genetic selection. It is also a deep, enlightening, and delightful (often hilarious) philosophical read. Scholars studying these topics, as well as the status of embryos and research on human subjects, would be wise to give Harris's arguments serious consideration."—Nir Eyal, Harvard Medical School

"Enhancing Evolution is the most comprehensive, robust defense of human enhancement in the literature to date. Harris blends more than fifteen years of work on human enhancement into a single volume and mixes in new arguments that definitively make the pro case for enhancement. The bioconservatives are in retreat. Harris has now set the agenda for the future of humankind. This will be the locus classicus for the enhancement debate."—Julian Savulescu, University of Oxford