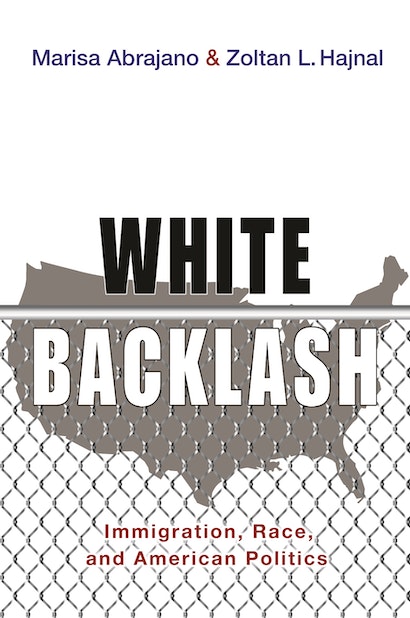 White Backlash provides an authoritative assessment of how immigration is reshaping the politics of the nation. Using an array of data and analysis, Marisa Abrajano and Zoltan Hajnal show that fears about immigration fundamentally influence white Americans’ core political identities, policy preferences, and electoral choices, and that these concerns are at the heart of a large-scale defection of whites from the Democratic to the Republican Party.

Abrajano and Hajnal demonstrate that this political backlash has disquieting implications for the future of race relations in America. White Americans’ concerns about Latinos and immigration have led to support for policies that are less generous and more punitive and that conflict with the preferences of much of the immigrant population. America’s growing racial and ethnic diversity is leading to a greater racial divide in politics. As whites move to the right of the political spectrum, racial and ethnic minorities generally support the left. Racial divisions in partisanship and voting, as the authors indicate, now outweigh divisions by class, age, gender, and other demographic measures.

White Backlash raises critical questions and concerns about how political beliefs and future elections will change the fate of America’s immigrants and minorities, and their relationship with the rest of the nation.

"Not only a solid piece of political scientific research, this book should play a central role in understanding of US party politics over the next several decades. . . . A must-read."—Choice

"A remarkable contribution to the interdisciplinary field of critical migration studies. It's a book of interest to researchers and practitioners working in the field of political science, demography and migration as it provides insight into the political, demographical, and cultural dimensions of the USA today."—Dr. Olga R. Gulina, Journal of Global Analysis

"White Backlash represents a bold and challenging contribution to the study of immigration and its impact on contemporary politics and policymaking. It adds serious and sobering findings to the dialogue on race and ethnic politics, which we can only hope will be ameliorated in time."—Sara Wallace Goodman, Perspectives on Politics

"White Backlash is one of the best books I have read in the last half century. Based on rigorous analyses of multiple data sets and presented in remarkably clear prose, the book advances a compelling and original argument that will change the way we talk about immigration and electoral politics. I highly recommend this important work to anyone seeking an understanding of the current and growing racial divide in U.S. politics."—William Julius Wilson, author of More than Just Race

"Abrajano and Hajnal make an original and important contribution to understanding the opinions of white Americans about immigration. Using multiple sources of data, the analyses in White Backlash persuasively show that the politics of immigration will have long-standing consequences for U.S. democracy."—Jane Junn, University of Southern California

"White Backlash incisively looks at how the rapid growth and negative portrayal of Latinos have sharpened racial fears, leading whites to redefine the fault lines of race in the United States. The mass immigration of Latinos has yielded a new wave of resentment increasingly skewed along partisan lines. For those wishing to understand the bitter division between Democrats and Republicans in Washington today, White Backlash is essential reading."—Douglas S. Massey, coauthor of Climbing Mount Laurel

"In this ambitious, meticulously researched, and powerful book, Abrajano and Hajnal reveal the significant impact immigration has had on white political behavior and policy choices over the past three decades. This pathbreaking work will change how we think about the current partisan divide in the United States."—Lisa García Bedolla, author of Latino Politics

"In this book, Abrajano and Hajnal examine the deep and broad ways in which views on immigration have altered the partisan landscape in the United States. Relying on multiple sources, White Backlash makes a significant contribution to many areas in American politics, including partisanship, campaigns and elections, racial and ethnic politics, state and local politics, and political psychology."—Deborah Schildkraut, Tufts University