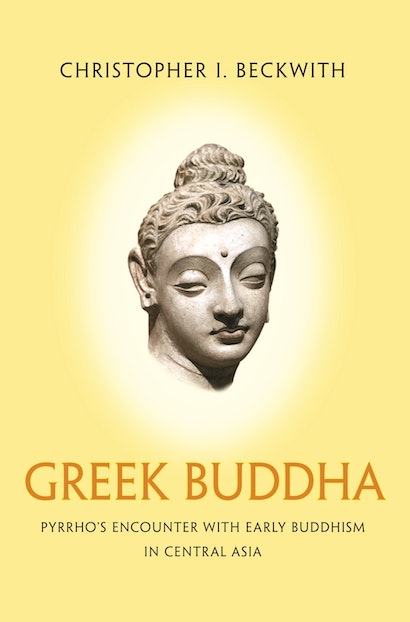 Pyrrho of Elis went with Alexander the Great to Central Asia and India during the Greek invasion and conquest of the Persian Empire in 334–324 BC. There he met with early Buddhist masters. Greek Buddha shows how their Early Buddhism shaped the philosophy of Pyrrho, the famous founder of Pyrrhonian scepticism in ancient Greece.

Christopher I. Beckwith traces the origins of a major tradition in Western philosophy to Gandhara, a country in Central Asia and northwestern India. He systematically examines the teachings and practices of Pyrrho and of Early Buddhism, including those preserved in testimonies by and about Pyrrho, in the report on Indian philosophy two decades later by the Seleucid ambassador Megasthenes, in the first-person edicts by the Indian king Devanampriya Priyadarsi referring to a popular variety of the Dharma in the early third century BC, and in Taoist echoes of Gautama’s Dharma in Warring States China. Beckwith demonstrates how the teachings of Pyrrho agree closely with those of the Buddha Sakyamuni, “the Scythian Sage.” In the process, he identifies eight distinct philosophical schools in ancient northwestern India and Central Asia, including Early Zoroastrianism, Early Brahmanism, and several forms of Early Buddhism. He then shows the influence that Pyrrho’s brand of scepticism had on the evolution of Western thought, first in Antiquity, and later, during the Enlightenment, on the great philosopher and self-proclaimed Pyrrhonian, David Hume.

Greek Buddha demonstrates that through Pyrrho, Early Buddhist thought had a major impact on Western philosophy.

Christopher I. Beckwith is professor of Central Eurasian studies at Indiana University, Bloomington. His books include Warriors of the Cloisters, Empires of the Silk Road, and The Tibetan Empire in Central Asia (all Princeton). He is the recipient of a MacArthur Award.

"The book offers a new and refreshing approach. It repeatedly calls for more work in various fields, and it should be hoped that scholars do not shy away from taking up the many challenges it raises."—Matthew Neale, Bulletin of the School of Oriental and African Studies

"Beckwith weaves into Greek Buddha long-standing questions about the origins of Buddhism, contact between Buddhism and ancient Greeks following the incursion of Alexander the Great into Central Asia in the fourth century BCE, and the nature of ethical knowledge. . . . This is excellent scholarship, and Beckwith presents his thesis with skill, insight, and scholarly probity."—Choice

"Beckwith makes a stronger case than anyone else to date that Pyrrho's thought and early Buddhism are too similar for coincidence."—Richard Bett, Common Knowledge

"This is a book that, whether you agree with its conclusions or otherwise (I am inclined to agree), is effervescent with interesting ideas that are well argued."—Ephraim Nissan, Quaderni di Studi Indo-Mediterranei

"In Greek Buddha, Beckwith delves into the writings of the Ionian philosopher-skeptic Pyrrho. Beckwith's discoveries, set forth in this elegantly argued book, upend received truths on the philosophical geography of Eurasia. Even the nonspecialist will thrill as Beckwith carefully traces core teachings of Buddhism to the world of Greek thought. Here is a book that is as provocative in its method as in its conclusions. Solid scholarship lives on these pages, and will live, too, in the inevitable debates to which this tour de force will give rise."—S. Frederick Starr, author of Lost Enlightenment

"Greek Buddha is a profoundly thought-provoking work. It is chock full of daring yet substantiated premises, which makes for genuinely exciting reading. Whether or not everyone will accept all of Beckwith's stimulating findings, they will surely come away from their encounter with this remarkable book with a greater appreciation for the interconnectedness of Eurasian history and culture."—Victor H. Mair, University of Pennsylvania

"In Greek Buddha, Beckwith again demonstrates the indebtedness of European culture to the profound interactions that occurred between the ancient peoples of Europe and Asia. Focusing on Pyrrho—founder of the skeptic school of thought—and his contact with early Buddhism, Beckwith weaves a rich tapestry of sources to shed new light on the complex processes of cultural exchange."—Peter B. Golden, professor emeritus, Rutgers University

"This intriguing, interdisciplinary book contains challenging findings that will provoke a reinterpretation of literary and archaeological sources, and fuel discussions and debates among scholars of Asian and European intellectual history, Buddhist experts, comparativists, classicists, and philosophers of all traditions and persuasions. At every step, Beckwith's encyclopedic knowledge of Asian and Western history and culture, and his versatile linguistic skills are masterfully brought together."—Georgios T. Halkias, University of Hong Kong

"Presenting an important and fascinating topic, this book's daring arguments leave readers feeling like they are accompanying the author on an against-the-odds adventure. An exciting work by an excellent scholar."—Justin E. H. Smith, Université Paris Diderot