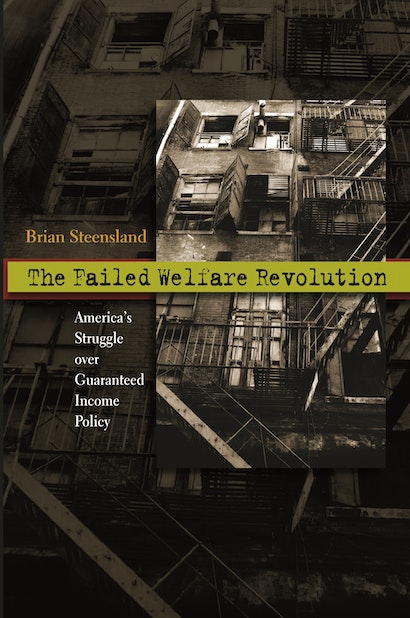 Today the United States has one of the highest poverty rates among the world’s rich industrial democracies. The Failed Welfare Revolution shows us that things might have turned out differently. During the 1960s and 1970s, policymakers in three presidential administrations tried to replace the nation’s existing welfare system with a revolutionary program to guarantee Americans basic economic security. Surprisingly from today’s vantage point, guaranteed income plans received broad bipartisan support in the 1960s. One proposal, President Nixon’s Family Assistance Plan, nearly passed into law in the 1970s, and President Carter advanced a similar bill a few years later. The failure of these proposals marked the federal government’s last direct effort to alleviate poverty among the least advantaged and, ironically, sowed the seeds of conservative welfare reform strategies under President Reagan and beyond.


This episode has largely vanished from America’s collective memory. Here, Brian Steensland tells the whole story for the first time — from why such an unlikely policy idea first developed to the factors that sealed its fate. His account, based on extensive original research in presidential archives, draws on mainstream social science perspectives that emphasize the influence of powerful stakeholder groups and policymaking institutions. But Steensland also shows that some of the most potent obstacles to guaranteed income plans were cultural. Most centrally, by challenging Americans’ longstanding distinction between the “deserving” and “undeserving” poor, the plans threatened the nation’s cultural, political, and economic status quo.

Brian Steensland is assistant professor of sociology at Indiana University.

"[T]his monograph . . . represents a substantial achievement and a major addition to the literature on America's welfare state."—Edward D. Berkowitz, Journal of American History

"The Failed Welfare Revolution is a well-researched book that fills a significant gap in the literature on U.S. social policy. The theoretical perspective is innovative, and Steensland makes a strong case for the study of the role of ideas and culture in policymaking."—Daniel Béland, Political Science Quarterly

"Brian Steensland's highly detailed account and analysis of guaranteed annual income (GAl) proposals during the Nixon and Carter administrations provides an important contribution to the research on social welfare policy in the United States, addressing a significant lacuna in this literature."—Kenneth Hudson, American Journal of Sociology

"This scholarly book will be a valuable resource for anyone interested in current debates about the merits of a guaranteed income policy. It is richly documented, draws effectively on theoretical ideas and transcends the limitations of many historical accounts by linking developments in the 1970s to current social welfare debates. An added bonus is the discussion of proposals by the Carter administration later in the decade to reformulate these ideas. The author's reflection on the role of cultural factors in social welfare thinking also makes a significant contribution and will hopefully facilitate future analyses that will explore the importance of culture in social policy."—James Midgley, Journal of Sociology and Social Welfare

"The Failed Welfare Revolution is an interesting retelling and synthesis of what happened some 40 years ago, and anybody interested in the subject will find this work to be of value."—Ralf Hertwig, Monthly Labor Review

"Steensland's precision in analyzing the guaranteed income debates throughout the book is impressive, as is his use of extensive original research from presidential archives. He has done a great service in so thoroughly deconstructing for the first time a neglected episode in the history of us (and Canadian) social policy."—Richard Pereira, Labour-Le Travail

"In this important work, Brian Steensland authoritatively reconstructs the history of guaranteed income proposals and highlights Richard Nixon's ironic role in the evolution of American social policy. This story, of possibilities foreclosed and opportunities missed, adds significantly to our knowledge of the American welfare state. An impressive achievement."—Robert C. Lieberman, Columbia University

"This is one of the most important books yet on the American welfare state. Thoroughly researched, clearly argued, and tightly focused, it is by far the most definitive account of a largely forgotten episode that, had it turned out differently, could have changed the subsequent history of U.S. domestic policy."—Michael B. Katz, University of Pennsylvania

"Painstakingly researched and well written, fast-paced and with a strong narrative style, The Failed Welfare Revolution takes a refreshingly cultural view of the rise and fall of guaranteed family income. It takes, at the same time, a refreshingly undeterministic view of history. With passage of a guaranteed family income law, working families might have had a much more reliable safety net."—Frank Dobbin, Harvard University