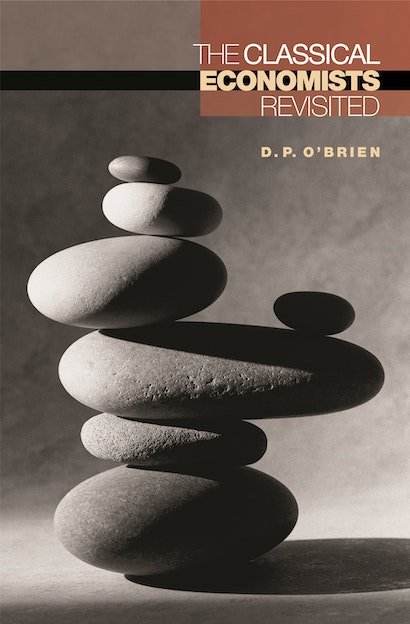 The Classical Economists Revisited conveys the extent, diversity, and richness of the literature of economics produced in the period extending from David Hume’s Essays of 1752 to the final contributions of Fawcett and Cairnes in the 1870s. D. P. O’Brien thoroughly updates, rewrites, and expands the vastly influential work he first published in 1975, The Classical Economists. In particular, he sets out to make clear the shaping of a comprehensive vision of the working of an open economy, building on the great work of Adam Smith in Wealth of Nations, a development that was substantially affected by the contributions of David Ricardo. He shows that the Classical literature was in fact the work of a host of thinkers from a wide range of backgrounds.


Covering the intellectual roots of the Classical literature and its methodological approaches, and the developed theories of value, distribution, money, trade, population, economic growth, and public finance, and examining the Classical attitudes toward a rich variety of policy issues, The Classical Economists Revisited considers not only the achievements of the Classical writers but also their legacy to the later development of economics.


A seminal contribution to the field, this book will be treasured for many years to come by economists, historians of economics, instructors and their students, and anyone interested in the sweeping breadth and enduring influence of the classical economists.

D. P. O'Brien, Professor Emeritus of Economics at the University of Durham, is the author or editor of many books, including J. R. McCulloch and Thomas Joplin and Classical Macroeconomics.

"The phrase tour de force is overused, but this is a work that clearly merits it. There is no greater living authority on classical economics than D. P. O'Brien."—Steven Medema, Editor of, Journal of the History of Economic Thought

"[F]rom now on all histories of economic thought can start their story in 1870, because it is difficult to see how anyone can improve on Professor O'Brien's analysis of the century that preceded it."—Mark Blaug, Economica

"[O]ne of the more appealing aspects of this excellent book is that Professor O'Brien does not always expect his readers to agree with him, but rather sets out to provide them with the means of forming their own opinions."—A. S. Skinner, The Economic Journal

"This is not a simple textbook treatment of the issues, but rather a scholarly dissection of each topic that draws on both the prominent and more obscure writers of the time. . . . [T]he careful reader will come away with a wealth of information and a sense that the struggles through which economic theory came were long, often convoluted, and always a process in which many people participated."—Choice