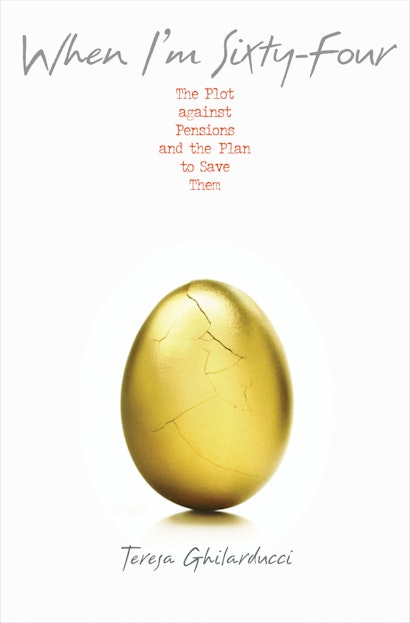 A crisis is looming for baby boomers and anyone else who hopes to retire in the coming years. In When I’m Sixty-Four, Teresa Ghilarducci, the nation’s leading authority on the economics of retirement, explains how to confront this crisis head-on, revealing the causes behind the increasingly precarious economics of old age in America and proposing a bold plan to guarantee retirement security for every working citizen.


Retirement is one of the hallmarks of a prosperous, civilized market economy. Yet in America today Social Security is on the ropes. Government and employers are dismantling pension security, forcing older people to work longer. The federal government spends billions in exemptions for 401(k)s and other voluntary retirement accounts, yet retirement savings for most workers is falling. Ghilarducci takes an unflinching look at the eroding economic structure of retirement in America — and what she finds is alarming. She exposes the failures of pension regulators and the false hopes of privatized Social Security. She tells the ugly truth about risky 401(k) plans, do-it-yourself retirement schemes, and companies like Enron that have left employees without any retirement savings. Ghilarducci puts forward a sweeping plan to revive the retirement-income system, a plan that will ensure that, after forty years of work, every American will receive 70 percent of their preretirement earnings, guaranteed for life. No other book makes such a persuasive case for overhauling the pension and Social Security system in order to provide older Americans with the financial stability they have earned and deserve.

Teresa Ghilarducci, after having taught economics for twenty-five years at the University of Notre Dame, now holds the Irene and Bernard L. Schwartz Chair of Economic Policy Analysis at the New School for Social Research. She is also the 2006-2008 Wurf Fellow at Harvard Law School. Her books include Labor's Capital: The Economics and Politics of Private Pensions. 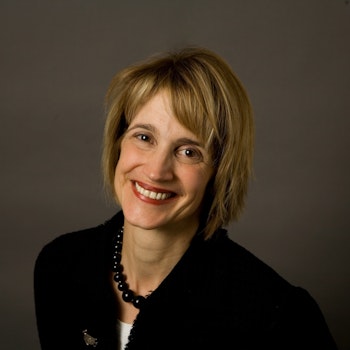 "Passionate. . . . In [Ghilarducci's] plan, the funds would not be managed by Wall Street but sent to Washington, where the federal government would guarantee a minimum return of 3 percent a year. . . . The conception behind Ghilarducci's dramatic proposals makes sense. If Americans cannot, without heavy sacrifice, save enough themselves to ensure adequate retirement, perhaps government, backed with subsidies should, as she suggests, make them save."—Jeff Madrick, New York Review of Books

"When I'm Sixty-Four is an excellent book . . . and makes a bold and workable proposal."—Clive Crook, Chronicle of Higher Education

"Teresa Ghilarducci's When I'm Sixty-Four is quite simply the best thing yet written on the retirement crisis facing baby boomers and the larger fragility of our retirement system. Far from defeatist, she proposes an ingenious national plan that will instantly become the reform against which all others must measure up. In clear prose, Teresa Ghilarducci cuts to the essence of an often bewildering subject that affects every American."—Robert Kuttner, American Prospect

"Teresa Ghilarducci isn't one for conventional wisdom. In When I'm Sixty-Four [she] argues that a rich nation ought to be able to ensure a secure old age. And she has a radical proposal for making that happen."—Pat Regnier, Money Magazine

"What's the difference between saving for retirement, on the one hand, and plain old saving, on the other? Teresa Ghilarducci, an economist at the New School, has a provocative book . . . which forces us to ask that question very seriously."—Felix Salmon, Portfolio.com

"What I like about Ghilarducci's proposal is its boldness—the idea that it is better to create a new model than to keep retrofitting a system that presents unacceptable risk to so many workers."—Martha M. Hamilton, Washington Post

"This volume provides a welcome curative to the daily news reports on the imminent retirement crisis facing the US because of falling birthrates, lengthening life spans, uncertain national economic performance, deliberate corporate gutting of programs, wage stagnation, and the potential Social Security fund insolvency. Ghilarducci carefully guides the reader through the morass of claims and counterclaims about the prospects for those entering their 'golden years' in the US. . . . Ghiladrucci's timely book addresses an important public policy issue."—D.J. Conger, Choice

"The book reads easily and well throughout, and I like the frequent boxes setting out 'Data to Digest' and 'The Bottom Line.' The diagnosis is powerful and hits many nails on the head."—Nicholas Barr, Journal of Economic Literature

"This precise moment in history is probably the ideal one to read Teresa Ghilarducci's When I'm Sixty-Four. . . . Its value to labor educators lies in Ghilarducci's thorough examination of the issue and in her extensive supporting documentation."—Judi King, Labor Studies Journal

"This is an insightful book on an important topic. Policymakers know that the baby boomers are facing a precarious retirement future. But most baby boomers do not appear to be concerned. Ghilarducci's analysis is a warning call designed to shake up the complacency. She proposes a bold plan to shore up the eroding economic foundations of retirement in America."—Laura D'Andrea Tyson, University of California, Berkeley

"At last! A robust, reliable, and highly readable reaffirmation of the right to retire. Teresa Ghilarducci is America's leading pension economist, defender of Social Security, and scourge of schemes to bilk the elderly. Here she tells it straight: what's right, what's wrong, and what should be done."—James K. Galbraith, University of Texas, Austin

"A blockbuster. This book addresses a hot topic. It is timely and full of interesting arguments, materials, and facts."—Thomas I. Palley, author of Plenty of Nothing