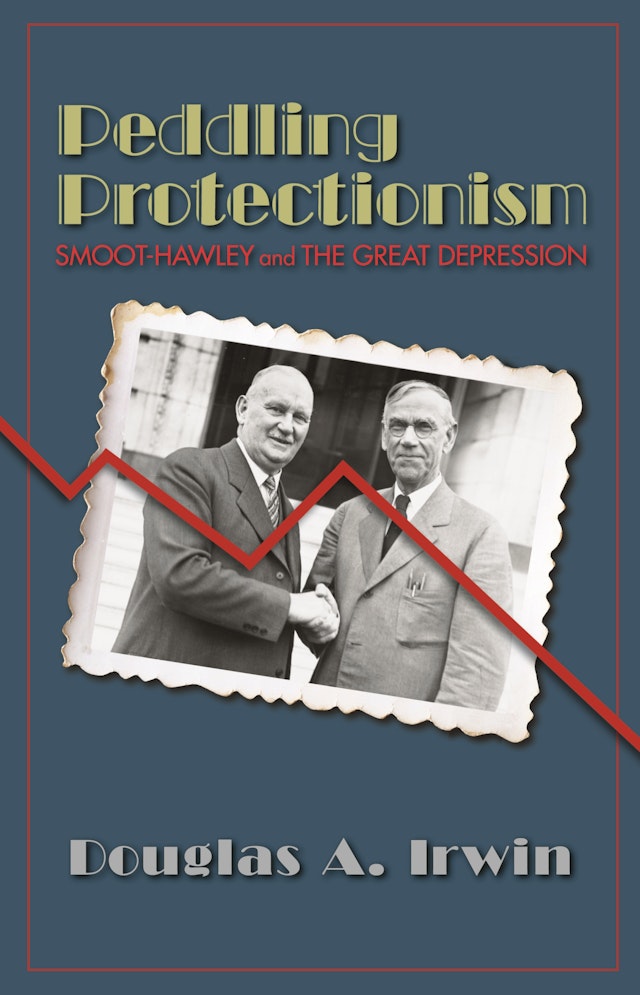 The Smoot-Hawley tariff of 1930, which raised U.S. duties on hundreds of imported goods to record levels, is America’s most infamous trade law. It is often associated with — and sometimes blamed for — the onset of the Great Depression, the collapse of world trade, and the global spread of protectionism in the 1930s. Even today, the ghosts of congressmen Reed Smoot and Willis Hawley haunt anyone arguing for higher trade barriers; almost single-handedly, they made protectionism an insult rather than a compliment. In Peddling Protectionism, Douglas Irwin provides the first comprehensive history of the causes and effects of this notorious measure, explaining why it largely deserves its reputation for combining bad politics and bad economics and harming the U.S. and world economies during the Depression.


In four brief, clear chapters, Irwin presents an authoritative account of the politics behind Smoot-Hawley, its economic consequences, the foreign reaction it provoked, and its aftermath and legacy. Starting as a Republican ploy to win the farm vote in the 1928 election by increasing duties on agricultural imports, the tariff quickly grew into a logrolling, pork barrel free-for-all in which duties were increased all around, regardless of the interests of consumers and exporters. After Herbert Hoover signed the bill, U.S. imports fell sharply and other countries retaliated by increasing tariffs on American goods, leading U.S. exports to shrivel as well. While Smoot-Hawley was hardly responsible for the Great Depression, Irwin argues, it contributed to a decline in world trade and provoked discrimination against U.S. exports that lasted decades.

Douglas A. Irwin is the Robert E. Maxwell '23 Professor of Arts and Sciences in the Department of Economics at Dartmouth College. He is the author of Against the Tide: An Intellectual History of Free Trade and Free Trade under Fire (both Princeton).

"Peddling Protectionism admirably conveys the context of the events it describes, surveying America's domestic politics in the late 1920s and providing a vivid account of the foreign retaliation that the tariff called forth."—James Grant, Wall Street Journal

"In his new book, Douglas A. Irwin tells the fascinating story of how Congress stubbornly passed a bill that, as opponents noted at the time, was truly doomed to fail."—Roger Lowenstein, New Republic's The Book

"[Irwin's] account of how the act came about is at once a thorough study and a breezy read. The often overblown rhetoric that Smoot-Hawley has inspired, seemingly from the start, also means that the book is often surprisingly amusing. . . . Mr. Irwin's description of how an attempt to prop up America's agricultural sector metastasised into a law that raised nearly 1,000 import tariffs, mostly on manufacturing products, is fascinating."—Economist

"A vivid, anecdotal, judicious telling of a timeless story: what happens when cocksure politicians fall into the grip of a really bad economic idea."—Christopher Caldwell, Financial Times

"Peddling Protectionism, by the economist and historian Douglas Irwin, is a vivid, anecdotal, judicious telling of timeless story: what happens when cocksure politicians fall into the grip of a really bad economic idea."—Christopher Caldwell, Financial Times

"In Peddling Protectionism, a short, clear and graceful book, in which maps, photographs and cartoons complement the handful of tables and graphs, Irwin makes a surprisingly lively story of the tradition of tariff revisions in the United States, the domestic politics that produced the Smoot-Hawley statute, in particular the various retaliatory measures that ensued. . . . [I]f only economists could write more books like it about other controversies!"—David Warsh, Economic Principals

"In his wonderful new book Peddling Protectionism, Dartmouth College economist and historian Douglas A. Irwin warns that congress, left on its own to fashion trade policy, will quickly be captured by special interests."—Daniel Griswold, Washington Times

"Irwin's encyclopedic knowledge of the literature on Smoot-Hawley will make this the standard work on the subject for many years to come. . . . The memory of Smoot-Hawley and its link to the Great Depression is one of the few things that keeps protectionism in check. For this reason, Peddling Protectionism deserves a wide readership."—Fiscal Times

"The Smoot-Hawley Tariff Act of 1930, named after two congressmen who sponsored it, raised U.S. duties on thousands of imported goods. Its ramifications on world trade reverberated for decades. In this comprehensive history, Irwin examines the political wrangling that caused the yearlong delay in its passage."—Library Journal

"A rarity among books of its ilk, Peddling Protectionism is a stellar read both as a historical narrative and an economic text. As mundane as the issues at hand might sound—think of Ben Stein's famous monotonic lecture about Smoot-Hawley in Ferris Bueller's Day Off—Irwin makes them comprehensible and even enjoyable to consider, peppering his text with anecdotes and contemporary political cartoons as he unpacks the economic context that led to the act's passage."—Asa Fitch, The National

"A rarity among books of its ilk, Peddling Protectionismis a stellar read. . . . [T]hink of Ben Stein's famous monotonic lecture about Smoot-Hawley in Ferris Bueller's Day Off—Irwin makes [The issues] comprehensible and even enjoyable to consider, peppering his text with anecdotes and contemporary political cartoons as he unpacks the economic context that led to the act's passage."—Asa Fitch, National

"Irwin's book is not technical; he summarizes research findings, including his own, but does not formally present models or econometric results. His approach makes the book quite suitable for the interested general reader, undergraduates, and economic historians and other economists interested in the life and times of Smoot-Hawley. Finally, this volume is well priced for individual purchase and is nicely illustrated with a number of photographs and political cartoons of the day. It is also mercifully free of the typos that plague so many university press books these days."—Anthony Patrick O'Brien, EH.Net

"Irwin, an economics professor at Dartmouth College and one of the world's leading scholars of international trade, makes a careful, fact-freighted case."—David R. Henderson, Regulation

"Irwin's outstanding book will teach even well-informed scholars a great deal about the history and politics that produced the Smoot-Hawley tariff as well as about its economic and political consequences. Read Irwin's book for the important details. . . . No better guide to Smoot-Hawley's history and consequences is available than Doug Irwin. His scholarship is impeccable; his reasoning is sure and never overreaching; and his prose is clean and direct. His little volume may not be the last word on Smoot-Hawley (Are there ever last words on any subject?), but it is to date the finest set of words devoted exclusively to that justly infamous spectacle of American protectionism."—Donald J. Boudreaux, Independent Review

"Irwin's outstanding book will teach even well-informed scholars a great deal. . . . [H]is scholarship is impeccable; his reasoning is sure and never overreaching; and his prose is clean and direct. . . . [T]o date the finest set of words devoted exclusively to that justly infamous spectacle of American protectionism."—Independent Review

"[Irwin's book is] eminently readable, and will be of interest to all those concerned with trade policy and the trading system, as well as being valuable for upper division undergraduate seminars. The particulars of the political arguments for and against SH, the quotes of opinions of policy makers, and the marshalling of evidence regarding policy choices and attempts at international cooperation make the period come alive and simultaneously enable a balanced assessment regarding the role of trade policy and its determinants."—Anne O. Krueger, Journal of World Trade Review

"[T]his book is a welcome contribution to the field. Several of the old 'wisdoms' regarding the tariff are presented and analysed, and the empirical evidence brought forth by Irwin is convincing. The course of events is concisely presented in a chronological manner. Irwin has collected quite a number of political cartoons, caricatures and quotations to illustrate the debate of contemporaries and scholars that both entertain and point to the gravity of the issue. All this adds nicely to the economic analyses. The lines of arguments and the analyses of the author in the book are convincing and accessible to both scholars and the general reader."—Peter Hedberg, Scandinavian Economic History Review

"It is, to put it mildly, a challenge to write an interesting and lively history of tariff policy. In his graceful study of the Smoot-Hawley tariff, economist Douglas Irwin successfully rises to the task. . . . Scholars of the period will find much that is valuable in Irwin's analytical and readable narrative."—Jason Scott Smith, Journal of American Studies

"Praise for the previous edition: "At once a thorough study and a breezy read. . . . [F]ascinating.""—The Economist

"An astute and well-told account of a law more often invoked than understood, Irwin's examination of the Smoot-Hawley Act explains how—for good or ill—Congress lost its credibility as a maker of trade law. A valuable book for anyone who wants to understand the Great Depression and whether it could come back."—Eric Rauchway, author of Blessed Among Nations and The Great Depression and the New Deal: A Very Short Introduction

"Douglas Irwin's elegant and sophisticated account of the Smoot-Hawley Tariff clears up some powerful and persistent myths. As Irwin shows, the tariff didn't begin with congressional logrolling (though that contributed substantially to the eventual outcome), it didn't cause the stock market panic of October 1929, and it didn't cause the Great Depression (but neither did it counteract deflation from abroad as some Keynesians and monetarists have claimed). And many of the book's details are fascinating and even bizarrely amusing."—Harold James, Princeton University

"Economists and economic historians have closely examined the Smoot-Hawley Tariff over the past few decades, but no one before Douglas Irwin has pulled together such a wide-ranging body of evidence to give us a solid and detailed understanding of the passage and impact of the bill. Understanding the Great Depression has become even more important since the global financial crisis, and that makes this book very timely. Brief, accessible, and clear, Peddling Protectionism should appeal to a wide range of readers."—Robert Whaples, Wake Forest University

"It would not surprise me if this became the definitive economic history of the Smoot-Hawley Tariff. Synthesizing and fleshing out the best research and nicely connecting economics and politics, Peddling Protectionism provides a fuller accounting of, and a deeper perspective on, what is arguably the best-known U.S. tariff of the twentieth century."—Kris Mitchener, Leavey School of Business, Santa Clara University