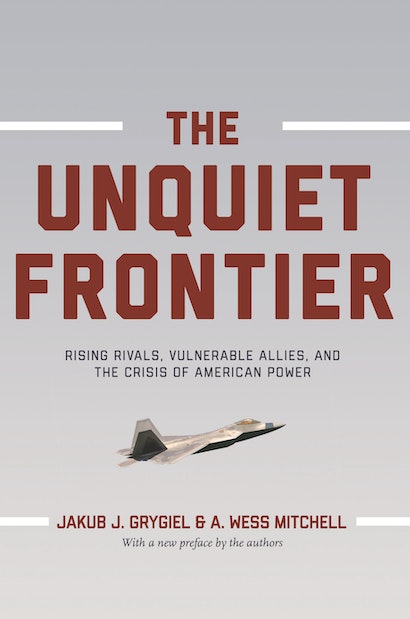 From the Baltic to the South China Sea, newly assertive authoritarian states sense an opportunity to resurrect old empires or build new ones at America’s expense. Hoping that U.S. decline is real, nations such as Russia, Iran, and China are testing Washington’s resolve by targeting vulnerable allies at the frontiers of American power. The Unquiet Frontier explains why the United States needs a new grand strategy that uses strong frontier alliance networks to raise the costs of military aggression in the new century.

Jakub Grygiel and Wess Mitchell describe the aggressive methods rival nations are using to test U.S. power in strategically critical regions throughout the world. They show how rising and revisionist powers are putting pressure on our frontier allies—countries like Poland, Israel, and Taiwan—to gauge our leaders’ commitment to upholding the U.S.-led global order. To cope with these dangerous dynamics, nervous U.S. allies are diversifying their national-security “menu cards” by beefing up their militaries or even aligning with their aggressors. Grygiel and Mitchell reveal how numerous would-be great powers use an arsenal of asymmetric techniques to probe and sift American strength across several regions simultaneously, and how rivals and allies alike are learning from America’s management of increasingly interlinked global crises to hone effective strategies of their own.

The Unquiet Frontier demonstrates why the United States must strengthen the international order that has provided greater benefits to the world than any in history.

"[Grygiel and Mitchell] paint a stark and compelling picture of the emerging geopolitical landscape. They remind us that, in the post–Cold War era, geopolitics matters."—H. R. McMaster, Wall Street Journal

"Well-argued and incisive. . . . At a time when American foreign policy often seems adrift, the authors' vigorous advocacy of a renewed clear-headed engagement with allies is a bracing contribution to discussions of this ongoing conundrum."—Kirkus

"A useful and thoughtful contribution to the most important debate in U.S. foreign policy and will be read with great care by President Barack Obama's supporters and critics alike."—Walter Russell Mead, Foreign Affairs

"The book offers a realist critique of American grand strategy in the contemporary geopolitical landscape. Grygiel and Mitchell lay out a highly readable if grim assessment of US alliance relationships , especially with NATO, Central Europe, the Middle East, and East Asia, and why they are so important for managing the dangers posed by rising rivals, namely Russia, Iran, and China. . . . Timely and provocative."—Choice

"In The Unquiet Frontier, Jakub Grygiel and A. Wess Mitchell have articulated a provocative justification for a revitalized strategy of containment focused on China, Iran, and Russia."—Brad Stapleton, Cato Journal

"Original and provocative."—Perspectives on Politics

"The Unquiet Frontier is the most lucid and penetrating analysis I've read about the Obama administration's most signal weakness—its failure to inspire and reassure allies. Geography and history, the two key elements of any classic text on the subject, dominate the narrative. This is a short book with an epic thesis."—Robert D. Kaplan, author of In Europe's Shadow: Two Cold Wars and a Thirty-Year Journey through Romania and Beyond

"In the looming debate about America's global strategy, the security of central Europe is likely to be one of the key issues. Grygiel and Mitchell's incisive and wide-ranging book provides a vital tool for rethinking the fundamentals of what is strategically necessary."—Zbigniew Brzezinski, Center for Strategic and International Studies

"An incisive analysis of the threats that face the frontier states of the Western liberal democratic order. This is an important book for anyone concerned about the defense of the hard-won stability and liberty that we enjoy, as well as about the toxic strategic dangers threatening us now that the post-Cold War era is over."—Toomas Hendrik Ilves, president of Estonia

"In an era when so many decisions are made at the spur of the moment, it's refreshing to read Grygiel and Mitchell's call for a new grand strategy, for a new attitude to allies and alliances, and above all for deeper, longer-term thinking about America's role in the world."—Anne Applebaum, author of Gulag: A History

"Grygiel and Mitchell join the ongoing debate over the future of American grand strategy and offer a compelling refutation of the idea that the United States can safely draw back from the positions it currently maintains around the world. They make the case that, far from being a burden with which Washington might be wise to dispense, America's alliances are actually critical to its continued security and prosperity."—Aaron L. Friedberg, author of A Contest for Supremacy: China, America, and the Struggle for Mastery in Asia

"Grygiel and Mitchell argue with convincing force and eloquence that America's alliance system is valuable, underappreciated, and increasingly vulnerable to pressure from revisionist states. Their book is a powerful rebuttal to those who contend that overseas alliances today are no longer relevant to American security. A brilliant, original, and timely reminder of why the United States has allies in the first place."—Colin Dueck, author of The Obama Doctrine: American Grand Strategy Today