"Convincingly makes the case that finance is a change-maker of change-makers."—Financial Times 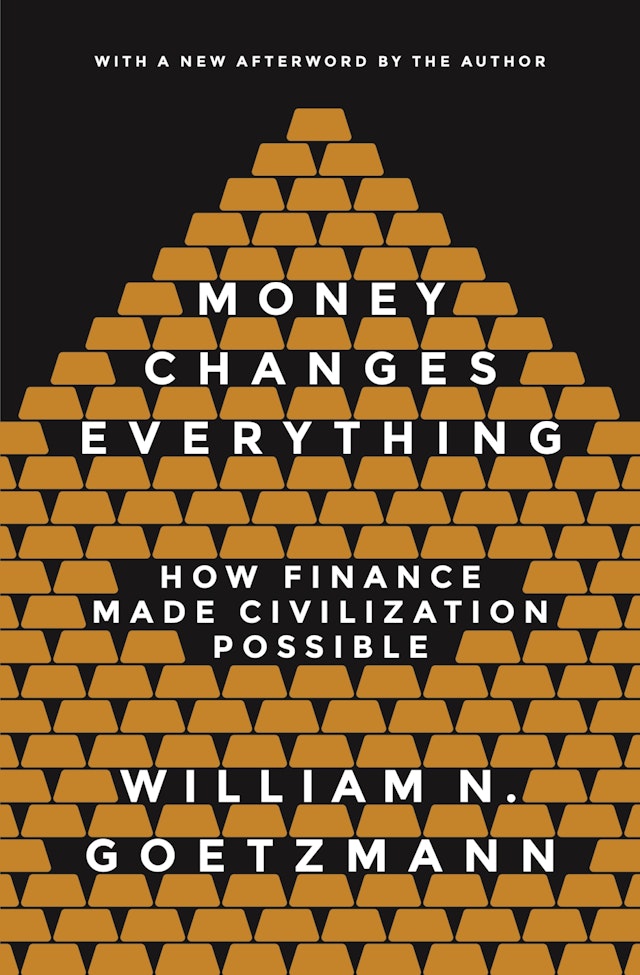 In the aftermath of recent financial crises, it’s easy to see finance as a wrecking ball: something that destroys fortunes and jobs, and undermines governments and banks. In Money Changes Everything, leading financial historian William Goetzmann argues the exact opposite—that the development of finance has made the growth of civilizations possible. Goetzmann explains that finance is a time machine, a technology that allows us to move value forward and backward through time; and that this innovation has changed the very way we think about and plan for the future. He shows how finance was present at key moments in history: driving the invention of writing in ancient Mesopotamia, spurring the classical civilizations of Greece and Rome to become great empires, determining the rise and fall of dynasties in imperial China, and underwriting the trade expeditions that led Europeans to the New World. He also demonstrates how the apparatus we associate with a modern economy—stock markets, lines of credit, complex financial products, and international trade—were repeatedly developed, forgotten, and reinvented over the course of human history.

Exploring the critical role of finance over the millennia, and around the world, Goetzmann details how wondrous financial technologies and institutions—money, bonds, banks, corporations, and more—have helped urban centers to expand and cultures to flourish. And it’s not done reshaping our lives, as Goetzmann considers the challenges we face in the future, such as how to use the power of finance to care for an aging and expanding population.

Money Changes Everything presents a fascinating look into the way that finance has steered the course of history.

William N. Goetzmann is the Edwin J. Beinecke Professor of Finance and Management and director of the International Center for Finance at the Yale School of Management. His books include The Origins of Value: The Financial Innovations that Created the Modern Financial Markets and The Great Mirror of Folly: Finance, Culture, and the Crash of 1720.

"Fascinating. . . . [B]rilliantly illuminated by scores of vivid examples, generously illustrated with a wealth of pictures, comprehensive in its geographical and temporal scope, and in my view almost entirely convincing."—Felix Martin, New York Times Book Review

"Money Changes Everything—a history of finance over three millennia—provides a welcome antidote to the incessant banker-bashing we've witnessed in recent years. Without finance, after all, civilized life could scarcely exist.""—Wall Street Journal

"Tactile and visual . . . . Goetzmann's careful, brick-by-brick approach to financial history convincingly makes the case that finance is a change-maker of change-makers."—Financial Times

"An accessible survey that does a fine job of reallocating past, present, and future."—Kirkus

"Let me say simply that everyone who is curious about the history of finance will be richly rewarded by reading this book."—Linda Jubin, Investing.com

"Money Changes Everything is . . . A tactile and visual history. It is rich with illustrations, and often reported from ground level as Goetzmann travels to dusty European archives or to sites of historical financial significance. . . . Goetzmann's careful, brick-by-brick approach to financial history convincingly makes the case that finance is a change-maker of change-makers."—Pietra Rivoli, Financial Times

"In the fallout from the Great Recession, it's been commonplace to vilify those working in the financial-services industry. But Goetzmann argues that finance is a worthwhile endeavor, beyond just earning a ton of money: Its innovations have made the growth of human civilization possible."—Bourree Lam, TheAtlantic.com

"A remarkable work of synthesis and scholarship, the book affords a deep perspective to anyone trying to grapple with current problems in the role of finance and financial regulation in a civilized society."—Elie Canetti, Finance & Development

"Its strength is the effort it makes to set money not only in its economic context, but also in its wider social and cultural setting."—Warwick Lightfoot, Financial World

"[A] magnificent history of money and finance."—Minneapolis Star Tribune

"Money Changes Everything is a treasure, unequalled in scope, unparalleled in depth of insight. . . . This is a must-read for anyone in finance or who wants to find out what it's about."—Financial Post

"A most pertinent and brave publication. . . . This hefty, worthy book, really is a historical eye-opener."—David Marx Book Reviews

"A panoramic historical sweep packed with interesting nuggets. . . . All very enjoyable, and I'd say essential for anyone interested in financial history."—Enlightened Economist

"William Goetzmann's Money Changes Everything is a thorough look at finance and world history, a 5,000-year journey that demonstrates the pivotal role of free market capitalism in building nations and serving human interests."—Washington Free Beacon

"Goetzmann offers an extraordinarily wide-ranging and thorough investigation of financial activity from earliest times to the present day, and his enthusiasm for the subject and his lively writing style make the topic much more engaging than one might expect. The immense breadth of his research means that every reader, no matter how expert in history or finance, will learn much. . . . The book has something for everyone."—Peter Acton, Australian Book Review

"The book is replete with fascinating historical tales and figures, including an option payoff diagram developed by Henri Lefèvre in the mid-1800s. Well-written and engaging, Goetzmann's book is a wonderful resource for those interested in learning more about the historical role of finance and its potential for addressing future challenges."—Choice

"Goetzmann weaves his expertise in finance, architecture, archaeology, sinology, and art history into a wonderfully rich tapestry. Goetzmann's enthusiasm for his topic is infectious. . . . Goetzmann has written a wonderfully erudite book in a way which is accessible to a wide audience. This book should be compulsory reading for all finance professionals and anyone with an interest in economics, finance, or history. If you want to understand how money changes everything, then Goeztmann's magnum opus is a must-read."—John D Turner, Economic History Review

"A must-read for anyone interested in the history of finance."—MarketWatch

"In Money Changes Everything, Mr. Goetzmann draws on objects in Yale's extensive historical collections to tell his exciting story. . . . His excitement with such artifacts is palpable."—Edward Chancellor, Wall Street Journal

"No one book can capture all there is to know about financial history. But Money Changes Everything comes awfully close to a comprehensive review of financial infrastructure. . . . The intersection of war, nation-building, finance, mathematics, and even art is given exhaustive analysis in this book. . . . Goetzmann's work is a fascinating tour through the history of currency, finance, probability, and risk."—David R. Henderson, Regulation

"The title of William Goetzmann’s book states: 'Money changes everything.' This much rings true, and it probably is. Goetzmann’s volume offers compelling evidence in support of the thesis stated in the title from a variety of interesting, informative and illustrative cases in world history."—Giorgio Baruchello, European Legacy

"Only William Goetzmann—an archaeologist, art historian, and esteemed finance scholar—could have produced this masterful exploration of money and investing through the ages. Money Changes Everything is at once deep, broad, sweeping, and gorgeously illustrated. It is a book that readers will savor and refer to again and again."—William Bernstein, author of A Splendid Exchange: How Trade Shaped the World

"Money is the greatest invention since the wheel. In this masterwork, Money Changes Everything, William Goetzmann traces money's role from prehistoric times to the present, showing how civilizations developed on a bedrock of financial transactions. A beautifully written and compelling book."—Elroy Dimson, University of Cambridge and London Business School

"In Money Changes Everything, readers learn a tremendous amount about the core ideas of finance. William Goetzmann uses a vast range of historical examples to explain why the evolution of finance and civilization are inseparable."—Robert J. Shiller, Nobel Laureate in Economics

"In this engaging book, William Goetzmann, a modern Renaissance man, demonstrates that throughout recorded history, the power of financial technologies has improved human existence. Like other technologies, financial innovations can sometimes be disruptive. Goetzmann, however, shows us that much of the time, these innovations propel economic progress and expand individual opportunities."—Richard Sylla, Stern School of Business, New York University

"If anyone had told me that someone could write coherently and intelligently about Karl Marx, cuneiform tablets, the South Sea bubble, the opium trade, and David's painting Death of Marat between a single set of covers, I would have shaken my head in disbelief. This book accomplishes precisely this. Money Changes Everything does nothing less than to think through the contribution of finance to modern civilization. A thrilling read."—Hans-Joachim Voth, University of Zurich

"Ranging from early civilizations to the present day and moving from the Fertile Crescent to our current global society, this book contains a wealth of interesting observations about the history of finance. Readers will be attracted by the genial tone and tales of personal discovery."—Peter Temin, Massachusetts Institute of Technology

"This is a long-term history of the development and importance of financial technologies and institutions. A useful synthesis that brings together primary materials, the book argues that financial systems provide the means for advancing civilization."—Graham Oliver, Brown University