An in-depth look at the history, leadership, and structure of the Federal Reserve Bank 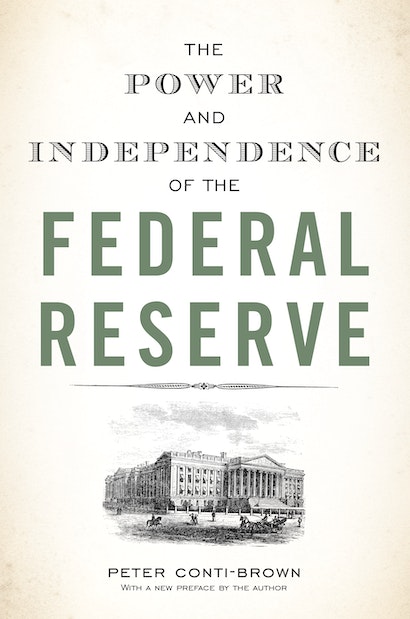 The independence of the Federal Reserve is considered a cornerstone of its identity, crucial for keeping monetary policy decisions free of electoral politics. But do we really understand what is meant by “Federal Reserve independence”? Using scores of examples from the Fed’s rich history, The Power and Independence of the Federal Reserve shows that much common wisdom about the nation’s central bank is inaccurate. Legal scholar and financial historian Peter Conti-Brown provides an in-depth look at the Fed’s place in government, its internal governance structure, and its relationships to such individuals and groups as the president, Congress, economists, and bankers.


Exploring how the Fed regulates the global economy and handles its own internal politics, and how the law does—and does not—define the Fed’s power, Conti-Brown captures and clarifies the central bank’s defining complexities. He examines the foundations of the Federal Reserve Act of 1913, which established a system of central banks, and the ways that subsequent generations have redefined the organization. Challenging the notion that the Fed Chair controls the organization as an all-powerful technocrat, he explains how institutions and individuals—within and outside of government—shape Fed policy. Conti-Brown demonstrates that the evolving mission of the Fed—including systemic risk regulation, wider bank supervision, and as a guardian against inflation and deflation—requires a reevaluation of the very way the nation’s central bank is structured.


Investigating how the Fed influences and is influenced by ideologies, personalities, law, and history, The Power and Independence of the Federal Reserve offers a uniquely clear and timely picture of one of the most important institutions in the United States and the world.

Peter Conti-Brown is assistant professor of legal studies and business ethics at the Wharton School of the University of Pennsylvania. He is the coeditor of When States Go Broke and Research Handbook on Central Banking.

"Conti-Brown, as a legal scholar, really gets the tangled web that is the Fed. And, as a writer, he does a masterful job of taking the typical reader into this web. The result is that Power and Independence is a wonderfully written book from which even the most expert Fedhead will learn a lot."—Narayana R. Kocherlakota, Journal of Economic Literature

"Conti-Brown has accomplished two near impossibilities: He has opened up new areas of inquiry on an overworn topic, and he has made them intellectually rigorous as well as riveting to read about."—Wall Street Journal

"[A] stimulating book. . . . Conti-Brown gives us much food for thought about how central banks go about their work."—David Green, Financial World

"[Conti-Brown] explains clearly how complex relationships shape the Fed's independence in a meticulous study of its political, economic and constitutional history."—Financial Times

"He explains clearly how complex relationships shape the Fed's independence in a meticulous study of its political, economic and constitutional history."—Philip Augar, Financial Times

"Peter's book should spur lawyers and academics to think critically about the FOMC's constitutional status. And whether or not we agree with Peter's conclusion, his book will serve to define the terms of the debate."—Daniel Hemel, Yale Journal of Regulation

"While the topic is complex, layered, and labyrinthine, Conti-Brown's clear analysis and elegant language make the book a fascinating read."—Biz Ed Magazine

"This book is an interesting, even scary, account of the governance of the Federal Reserve, with examples of the influence of personalities in ways not anticipated by law."—John H. Wood, EH.Net

"A page-turner. . . . This book is that rarest of beasts: serious financial analysis in a wonderfully well written story."—Financial Post

"Beginning with its founding, [Conti-Brown] carefully walks readres through the changes to the practice and structure of the Federal Reserve system. In doing so, he has not only a historian's eye for important facts and details but also a lawyer's perspective on administrative law and power relationships. This is one of those books many readers will find illuminating even while disagreeing vehemently with one or two items."—Choice

"[Conti-Brown] has not only a historian's eye for important facts and details but also a lawyer's perspective on administrative law and power relationships. This is one of those books many readers will find illuminating."—Choice

"Excellent. . . . I highly recommend this book for readers interested in the Federal Reserve System."—Scott Sumner, Econlog

"Peter Conti-Brown's The Power and Independence of the Federal Reserve (Princeton) is a study of what might be called the Fed's unwritten constitution. . . . For today's Fed leaders, it is a sobering lesson."—Sebastian Mallaby, Financial Times

"Conti-Brown's clear analysis and elegant language make [The Power and Independence of the Federal Reserve] a fascinating read."—BizEd Magazine

"Critiques of central banking have for too long been the preserve of economists and insiders, while legal scholars and political scientists concentrated on the regulatory state. Scholarly and stimulating, The Power and Independence of the Federal Reserve breaks this mold and deserves to attract wide interest and discussion."—Paul Tucker, former deputy governor, Bank of England and senior fellow, Harvard Kennedy School and Harvard Business School

"This excellent book focuses on the operations and governance of the Federal Reserve. With an entertaining style and sound justification, Conti-Brown concludes that there are too many diverse functions and policymakers within the Fed, and he offers sensible policy alternatives. His book is essential reading for anyone concerned about monetary policy and the role of the Fed, and central banking more widely."—Charles Goodhart, emeritus professor, London School of Economics

"Is it possible to write a fascinating, original, and even literary book on the power and independence of the Federal Reserve? Yes, because Peter Conti-Brown has done it. His unique blend of historical narrative, legal analysis, and economic knowledge distinguishes this remarkable book from anything ever written about the Fed. Readers may not agree with all of Conti-Brown's conclusions, some of which are highly controversial. But everyone will learn something new."—Alan S. Blinder, author of After the Music Stopped

"Is it possible to write a fascinating, original, and even literary book on the power and independence of the Federal Reserve? Yes, because Peter Conti-Brown has done it."—Alan S. Blinder, author ofAfter the Music Stopped

"Debates about the Federal Reserve often pit advocates of Fed independence against those who believe the Fed should be regularly audited or even abolished. In this highly readable work, Peter Conti-Brown shows both views are mistaken. Along the way, he uncovers forgotten heroes of Fed history, offers the clearest explanation yet of the Fed's maneuvers during and after the 2008 crisis, and demonstrates that the Fed's regional banks are almost certainly unconstitutional. This is an important book."—David Skeel, University of Pennsylvania

"Although more people than ever have become aware of the Fed in recent years, very few actually know what it does and how it actually works. This book explains the history and laws that have shaped the Fed, and provides a deep and coherent discussion of the notion of Fed independence. It makes a significant contribution to our understanding of the Federal Reserve and central banks."—Anat Admati, coauthor of The Bankers' New Clothes

"We know that the Federal Reserve is important, but we seldom think about the legal and political details of its daily monetary policy decisions. In this fascinating book, Conti-Brown brings a fresh and challenging perspective to almost every aspect of Fed history and its current operations."—Simon Johnson, author of 13 Bankers