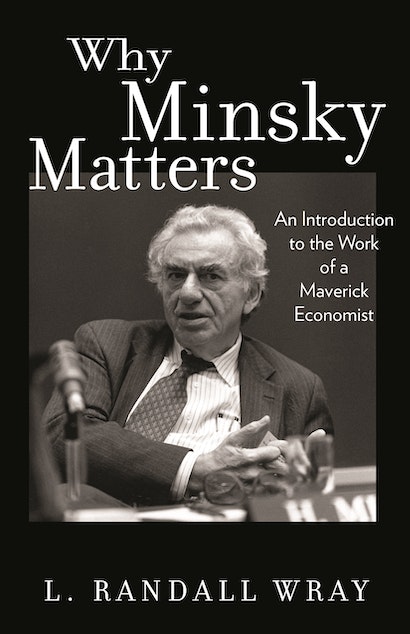 Perhaps no economist was more vindicated by the global financial crisis than Hyman P. Minsky (1919–96). Although a handful of economists raised alarms as early as 2000, Minsky’s warnings began a half-century earlier, with writings that set out a compelling theory of financial instability. Yet even today he remains largely outside mainstream economics; few people have a good grasp of his writings, and fewer still understand their full importance. Why Minsky Matters makes the maverick economist’s critically valuable insights accessible to general readers for the first time. L. Randall Wray shows that by understanding Minsky we will not only see the next crisis coming but we might be able to act quickly enough to prevent it.

As Wray explains, Minsky’s most important idea is that “stability is destabilizing”: to the degree that the economy achieves what looks to be robust and stable growth, it is setting up the conditions in which a crash becomes ever more likely. Before the financial crisis, mainstream economists pointed to much evidence that the economy was more stable, but their predictions were completely wrong because they disregarded Minsky’s insight. Wray also introduces Minsky’s significant work on money and banking, poverty and unemployment, and the evolution of capitalism, as well as his proposals for reforming the financial system and promoting economic stability.

A much-needed introduction to an economist whose ideas are more relevant than ever, Why Minsky Matters is essential reading for anyone who wants to understand why economic crises are becoming more frequent and severe—and what we can do about it.

L. Randall Wray is professor of economics at Bard College, senior scholar at the Levy Economics Institute of Bard College.

"An accessible introduction to the economist who saw the global financial crisis coming."—Bookseller Buyer's Guide

"I came away from the book with considerably more understanding of Minsky's views and a greater respect for them."—Arnold Kling, Econlib

"[A] crystal-clear summary of Minsky's life's work…. While Minsky is now quite well known, his contributions are still widely ignored or misunderstood. This makes Wray's book a godsend…. By making his insights accessible to a general audience for the first time, Wray's book has the potential to transform the future of economic policymaking and, with it, to create a better life for future generations."—Victoria Bateman, Times Higher Education

"A useful and accessible overview of both what Minsky said and—as the title puts it—why it matters."—Diane Coyle, The Enlightened Economist

"A highly readable overview of the contributions of Hyman Minsky, and justifies the title as to how Minsky matters."—Malcolm Sawyer, Journal of Economic Literature

"One might think this book is a biography of the economist Hyman Minsky, but it is much more than that. In a thoroughly engaging, elucidating way, the author summarizes macroeconomic theories from Adam Smith to Keynes and the present."—Choice

"A fine book that successfully brings Minsky's great contributions to our attention again. If there should be an after-life, one of its purest pleasures for me would be to have the chance to discuss monetary analysis with Hyman Minsky for a sizeable chunk of eternity. Wray’s book gives a foretaste of such heavenly interaction."—Charles Goodhart, European Journal of the History of Economic Thought

"A fine book that successfully brings Minsky's great contributions to our attention again."—Charles Goodhart, The European Journal of the History of Economic Thought

"An accessible guide. . . . Wray's book presents us with the real Minsky in readable form; the man’s ideas and arguments, and locates him within the currents of economic thought."—Jonathan Warner, European Legacy

"Ever since the climax of the financial crisis in 2008–09, Hyman Minsky has become an iconic point of reference. Why Minsky Matters renders the authentic Minsky accessible to a wide readership for the first time. L. Randall Wray has a comprehensive grasp of Minsky's thought, and the capacity to express it in a compact, highly readable fashion. This is a book of rare clarity, importance, and usefulness."—James K. Galbraith, author of The End of Normal: The Great Crisis and the Future of Growth

"Hyman Minsky is the most important economist since Keynes, yet it's virtually impossible to find any books about him. Why Minsky Matters should be read not just by anyone who wants to understand Minsky, but anyone who wants to understand our economy. The reason, as L. Randall Wray makes obvious, is that Minsky does a better job of explaining the global financial crisis—and why it isn't over yet—than anyone else. Everyone should read this book."—Michael Pettis, author of The Great Rebalancing: Trade, Conflict, and the Perilous Road Ahead for the World Economy

"Intelligent, accessible, and clear, Why Minsky Matters brings Minsky's ideas to life and explains why they help us understand the world in which we live."—Steven M. Fazzari, coauthor of After the Great Recession