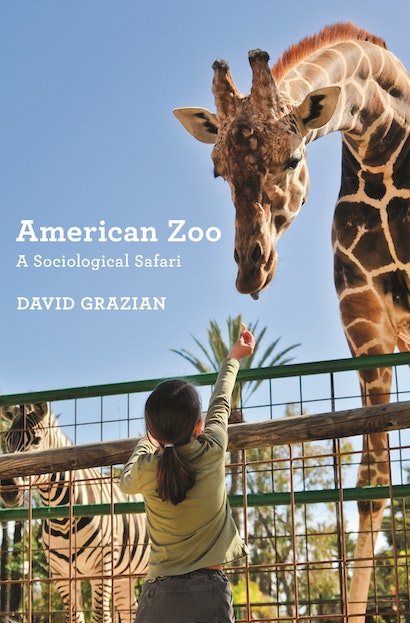 Orangutans swing from Kevlar-lined fire hoses. Giraffes feast on celebratory birthday cakes topped with carrots instead of candles. Hi-tech dinosaur robots growl among steel trees, while owls watch animated cartoons on old television sets. In American Zoo, sociologist David Grazian takes us on a safari through the contemporary zoo, alive with its many contradictions and strange wonders.

Trading in his tweed jacket for a zoo uniform and a pair of muddy work boots, Grazian introduces us to zookeepers and animal rights activists, parents and toddlers, and the other human primates that make up the zoo’s social world. He shows that in a major shift away from their unfortunate pasts, American zoos today emphasize naturalistic exhibits teeming with lush and immersive landscapes, breeding programs for endangered animals, and enrichment activities for their captive creatures. In doing so, zoos blur the imaginary boundaries we regularly use to separate culture from nature, humans from animals, and civilization from the wild. At the same time, zoos manage a wilderness of competing priorities—animal care, education, scientific research, and recreation—all while attempting to serve as centers for conservation in the wake of the current environmental and climate-change crisis. The world of the zoo reflects how we project our own prejudices and desires onto the animal kingdom, and invest nature with meaning and sentiment.

A revealing portrayal of comic animals, delighted children, and feisty zookeepers, American Zoo is a remarkable close-up exploration of a classic cultural attraction.

David Grazian is associate professor of sociology at the University of Pennsylvania. He is the author of Blue Chicago: The Search for Authenticity in Urban Blues Clubs, On the Make: The Hustle of Urban Nightlife, and Mix It Up: Popular Culture, Mass Media, and Society.

"Although there are plenty of books about zoos, zoo ethnographies are a rare treat. . . . Grazian's impressive commitment to understanding zoo workers through everyday encounters adorns his book."—Irus Braverman, , Times Literary Supplement

"Inspiring. [Grazian] makes the reader repeatedly reflect on whether there might be better ways of educating the public and contributing to wildlife conservation."—Matthew Cobb, New Scientist

"An engaging account … discussing some interesting questions: Should large, intelligent mammals such as great apes be confined at all? Why are Americans so often concerned about the comfort of zoo animals when they don't worry about the vastly greater number of other caged animals—the ones being prepared for slaughter? Beyond entertainment and amusement, what should a zoo's role be regarding environmental protection or species conservation? American Zoo is a serious book … but Grazian's lively, readable prose makes it entertaining as well."—Nancy Szokan, Washington Post

"Grazian has a sharp eye for detail and ethical tensions."—Amanda Gilroy, PopMatters

"The history of zoo design demonstrates that 'natural' enclosures serve humans more than the creatures who live within them. We favor artificial habitats that follow aesthetic expectations about nature rather than purely natural conditions, as the sociologist David Grazian argues in his book American Zoo. They reflect our own fantasies about the animals we gawk at rather than the true needs of these nonhuman others. In the process of meeting our needs, they may erase the true plight of those animals, naturalizing nothing so much as the pretense of our benevolent dominion over nature."—Jacob Brogan, Slate

"Sociologist Grazian took his young son on a cross-country excursion to visit more than two dozen zoos and aquariums. He saw that zoos have been transformed in recent years from sad places with cramped, barren cages to more open, expansive exhibits. But he also noted man's strange relationship with the nature."—Chicago Tribune

"A shrewd examination of a persistent social institution, a major contribution for rethinking the nature/culture distinction, and a model of how to do and write up an ethnographic study."—Jack Katz, American Journal of Sociology

"With a keen sociological eye (and, as relevant, sense of smell), David Grazian reveals the habits, aspirations, and curious social organization of the human species. In this book, Grazian closely examines what captures us as well as what we capture, feed, display, love, and kill—in zoos and beyond."—Harvey Molotch, author of Against Security

"American Zoo is a groundbreaking account of the elaborate cultural work we humans do to produce nature in the modern world. David Grazian spent years inside the cage, handling snakes and tarantulas, feeding monkeys and alligators, and making sharp observations about the wild ways we tame the environment to suit our needs. The result is an unforgettable look at human behavior. You'll never see our species the same way again."—Eric Klinenberg, author of Going Solo

"An enlightening look at a world simultaneously familiar and surprising, American Zoo examines all the salient aspects of zoo culture and effectively provides a unique portrait of an important but unexplored institution."—Gary Alan Fine, Northwestern University

"David Grazian brings us into zoos as we've never seen them before. American Zoo helps us better understand our relationship with the ‘natural world,' and leads us to reconsider our culture and community. This is the finest book by a master of his craft."—Shamus Khan, author of Privilege: The Making of an Adolescent Elite at St. Paul's School