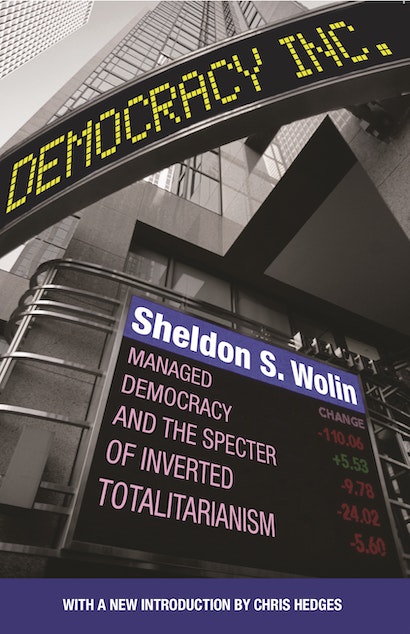 Democracy is struggling in America — by now this statement is almost cliché. But what if the country is no longer a democracy at all? In Democracy Incorporated, Sheldon Wolin considers the unthinkable: has America unwittingly morphed into a new and strange kind of political hybrid, one where economic and state powers are conjoined and virtually unbridled? Can the nation check its descent into what the author terms “inverted totalitarianism”?


Wolin portrays a country where citizens are politically uninterested and submissive — and where elites are eager to keep them that way. At best the nation has become a “managed democracy” where the public is shepherded, not sovereign. At worst it is a place where corporate power no longer answers to state controls. Wolin makes clear that today’s America is in no way morally or politically comparable to totalitarian states like Nazi Germany, yet he warns that unchecked economic power risks verging on total power and has its own unnerving pathologies. Wolin examines the myths and mythmaking that justify today’s politics, the quest for an ever-expanding economy, and the perverse attractions of an endless war on terror. He argues passionately that democracy’s best hope lies in citizens themselves learning anew to exercise power at the local level.

Democracy Incorporated is one of the most worrying diagnoses of America’s political ills to emerge in decades. It is sure to be a lightning rod for political debate for years to come. Now with a new introduction by Pulitzer Prize–winning journalist Chris Hedges, Democracy Incorporated remains an essential work for understanding the state of democracy in America.

Sheldon S. Wolin (1922-2015) was professor emeritus of politics at Princeton University. His books include Politics and Vision and Tocqueville between Two Worlds (both Princeton).

"[A] comprehensive diagnosis of our failings as a democratic polity by one of our most seasoned and respected political philosophers. . . . Democracy Incorporated is a devastating critique of the contemporary government of the United States—including what has happened to it in recent years and what must be done if it is not to disappear into history along with its classic totalitarian predecessors."—Chalmers Johnson, Truthdig

"[Democracy Incorporated provides] a rare, chilling analysis of intellectual critics of democracy. If democracy means more than occasional elections and protection of those rights that are compatible with economic and political elites' interests, Wolin's analysis of our democratic predicament is shocking, solid, and fundamentally correct."—C. P. Waligorski, Choice

"Sheldon Wolin has produced an ambitious and broad-ranging book that examines the current state of democracy in America. . . . Wolin argues that the unquestioned faith in the virtues of free market capitalism has dramatically narrowed the range of policy options that are on the table when debate turns to resolving the US's ills. . . .[T]his is a trenchant and powerful volume."—Alex Waddan, International Affairs

"Of the many books I've read or skimmed in the past seven years that attempted to get inside the social and political debacles of the present, none has had the chilling clarity and historical discernment of Sheldon S. Wolin's Democracy Incorporated. Building on his fifty years as a political theorist and proponent of radical democracy, Wolin here extends his concern with the extinguishing of the political and its replacement by fraudulent simulations of democratic process."—Jonathan Crary, Artforum

"[W]e need to understand the deep roots of our present troubles ourselves and Wolin's book is an excellent beginning."—Toby Grace, Out in Jersey

"Democracy Incorporated acts as an antidote to unconstrained corporate power and an elitist obsession and should be widely read by all those who cherish democracy and civil liberty."—Shih-Yu Chou, Political Studies Review

"[Wolin] provides a rich narrative of the struggle of elites and the demos from ancient Greece through the writing of the U.S. Constitution and into the present, and the corporate-managed politics that has emerged will survive no matter which party holds Congress or the presidency."—Coleman Fannin, Journal of Church and State

"Despite being written shortly before both the financial crisis and the Obama victory, the main lineaments of his analysis are still alarmingly cogent."—Tom Angier, Marx & Philosophy Review of Books

"Praise for the previous edition: "Democracy Incorporatedacts as an antidote to unconstrained corporate power and … should be widely read by all those who cherish democracy and civil liberty.""—Shih-Yu Chou, Political Studies Review

"Praise for the previous edition: "[A] comprehensive diagnosis of our failings as a democratic polity by one of our most seasoned and respected political philosophers….Democracy Incorporatedis a devastating critique of the contemporary government of the United States.""—Chalmers Johnson, Truthdig

"Praise for the previous edition: "Sheldon Wolin has produced an ambitious and broad-ranging book that examines the current state of democracy in America…. This is a trenchant and powerful volume.""—Alex Waddan, International Affairs

"Praise for the previous edition: "Like George Orwell's1984, Wolin'sDemocracy Incorporatedwas intended to be a warning not a handbook. Wolin was prescient…. To find our way back to normalcy in a time of crisis and emergency we must ask ourselves, ‘how did we get here?' Wolin's wisdom is a helpful guide for that journey.""—Salon

"With his fundamental grasp of political theory and restless spirit to get at the essence of what threatens modern democracy, Wolin demonstrates that the threats to our democratic traditions and institutions are not always from outside, but may come from within. It is a book that policymakers and scholars of contemporary society should read and reflect upon."—Rakesh Khurana, Harvard Business School, author of From Higher Aims to Hired Hands

"As we've come to expect from Sheldon Wolin, a tightly argued and deeply revealing book about the dangers of unconstrained capitalism for our democracy."—Robert B. Reich, University of California, Berkeley

"For half a century, Sheldon Wolin has been one of the most distinguished and influential political theorists in the United States and a perceptive observer of the American political scene. In his magisterial latest book, Wolin shows himself at the height of his powers as he presents a highly original, sober, and persuasive account of a number of tendencies in contemporary American society that constitute a significant danger for the future of constitutional democracy. If totalitarianism establishes itself in the United States, it will be in the 'inverted' form Wolin analyzes in this important book."—Raymond Geuss, University of Cambridge

"Wolin's writing has a resonance that binds the canon of political philosophy to unfolding events and present circumstances. In Democracy Incorporated, he contends that the institutions and practices that Americans regarded as their defense against totalitarianism—and other forms of authoritarian domination—have failed them. There is nothing like this book. It is a major, potentially revolutionary contribution to political thought."—Anne Norton, author of Leo Strauss and the Politics of American Empire

"Powerful and persuasive. Democracy Incorporated does exactly what great political theory should do: it provides a theoretical framework that allows the reader to see the political world anew. It left this reader with an almost nightmarish vision of American politics today, a nightmare all the more terrifying for being so compelling, so vivid, and so real."—Marc Stears, author of Progressives, Pluralists, and the Problems of the State