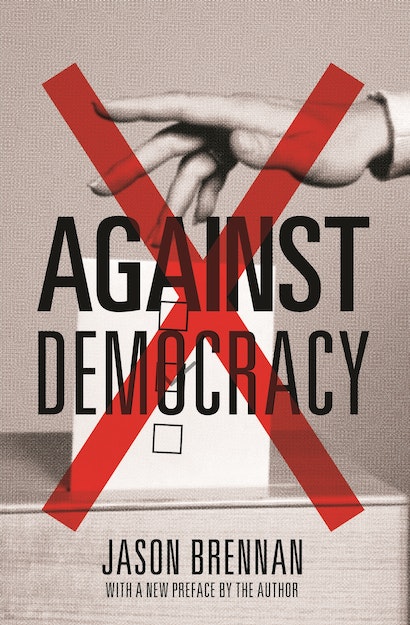 Most people believe democracy is a uniquely just form of government. They believe people have the right to an equal share of political power. And they believe that political participation is good for us—it empowers us, helps us get what we want, and tends to make us smarter, more virtuous, and more caring for one another. These are some of our most cherished ideas about democracy. But Jason Brennan says they are all wrong.

In this trenchant book, Brennan argues that democracy should be judged by its results—and the results are not good enough. Just as defendants have a right to a fair trial, citizens have a right to competent government. But democracy is the rule of the ignorant and the irrational, and it all too often falls short. Furthermore, no one has a fundamental right to any share of political power, and exercising political power does most of us little good. On the contrary, a wide range of social science research shows that political participation and democratic deliberation actually tend to make people worse—more irrational, biased, and mean. Given this grim picture, Brennan argues that a new system of government—epistocracy, the rule of the knowledgeable—may be better than democracy, and that it’s time to experiment and find out.

A challenging critique of democracy and the first sustained defense of the rule of the knowledgeable, Against Democracy is essential reading for scholars and students of politics across the disciplines.

Featuring a new preface that situates the book within the current political climate and discusses other alternatives beyond epistocracy, Against Democracy is a challenging critique of democracy and the first sustained defense of the rule of the knowledgeable.

Jason Brennan is the Flanagan Family Chair of Strategy, Economics, Ethics, and Public Policy at the McDonough School of Business at Georgetown University. He is the author of The Ethics of Voting (Princeton), and Why Not Capitalism?. He writes regularly for Bleeding Heart Libertarians, a blog.

"Brennan has a bright, pugilistic style, and he takes a sportsman's pleasure in upsetting pieties and demolishing weak logic. Voting rights may happen to signify human dignity to us, he writes, but corpse-eating once signified respect for the dead among the Fore tribe of Papua New Guinea. To him, our faith in the ennobling power of political debate is no more well grounded than the supposition that college fraternities build character."—Caleb Crain, New Yorker

"A brash, well-argued diatribe against the democratic system. There is much to mull over in this brazen stab at the American electoral process. . . . [I]n the current toxic partisan climate, Brennan's polemic is as worth weighing as any other."—Kirkus Reviews

"Against Democracychallenges a basic precept that most people take for granted: the morality of democracy. . . . Brennan presents a variety of strategies by which the quality of the electorate could be improved, while still keeping it large, and demographically representative. . . . [A] powerful challenge to the conventional wisdom about democracy. . . . [W]orth serious consideration."—Ilya Somin, Washington Post

"Compelling. . . . This is theory that skips, rather than plods."—Los Angeles Times

"The book makes compelling reading for what is typically a dry area of discourse. This is theory that skips, rather than plods."—Molly Sauter, Los Angeles Times

"Among the best works in political philosophy in recent memory."—Zachary Woodman, Students for Liberty

"Lucidly written in provocative, sometimes brash tones, it is especially useful for the undergraduate classroom."—Choice

"Against Democracy seems scarily prescient today. Writing well before the twin shocks of the Brexit and the U.S. elections, the Georgetown political scientist makes a powerful case that popular democracy can be dangerous—and, provocatively, that irrational and incompetent voters should be excluded from democratic decision-making. The case for elitism in governance never read so well."—Zocalo Public Square

"While controversial, Brennan raises important questions that anyone with an interest in politics, philosophy, and economics will have to answer for years to come. This book is a must read."—Thomas Savidge, Journal of Value Inquiry

"Jason Brennan is a marvel: a brilliant philosopher who scrupulously studies the facts before he moralizes. In Against Democracy, his elegant method leads to the contrarian conclusion that democratic participation prompts human beings to forget common sense and common decency. Voting does not ennoble us; it tests the virtue of the best, and brings out the worst in the rest."—Bryan Caplan, author of The Myth of the Rational Voter

"Against Democracy makes a useful set of challenges to both conventional wisdom and dominant trends in political philosophy and political theory, particularly democratic theory. Engagingly written, it is a lively and entertaining read."—Alexander Guerrero, University of Pennsylvania