A groundbreaking investigation into why so many Islamic radicals are engineers 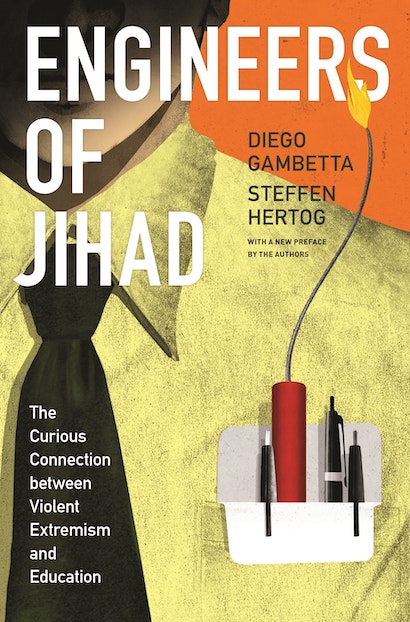 The violent actions of a few extremists can alter the course of history, yet there persists a yawning gap between the potential impact of these individuals and what we understand about them. In Engineers of Jihad, Diego Gambetta and Steffen Hertog uncover two unexpected facts, which they imaginatively leverage to narrow that gap: they find that a disproportionate share of Islamist radicals come from an engineering background, and that Islamist and right-wing extremism have more in common than either does with left-wing extremism, in which engineers are absent while social scientists and humanities students are prominent.

Searching for an explanation, they tackle four general questions about extremism: Under which socioeconomic conditions do people join extremist groups? Does the profile of extremists reflect how they self-select into extremism or how groups recruit them? Does ideology matter in sorting who joins which group? Lastly, is there a mindset susceptible to certain types of extremism?

Using rigorous methods and several new datasets, they explain the link between educational discipline and type of radicalism by looking at two key factors: the social mobility (or lack thereof) for engineers in the Muslim world, and a particular mindset seeking order and hierarchy that is found more frequently among engineers. Engineers’ presence in some extremist groups and not others, the authors argue, is a proxy for individual traits that may account for the much larger question of selective recruitment to radical activism.

Opening up markedly new perspectives on the motivations of political violence, Engineers of Jihad yields unexpected answers about the nature and emergence of extremism.

Diego Gambetta is professor of social theory at the European University Institute, Florence, and official fellow of Nuffield College at the University of Oxford. His books include The Sicilian Mafia and Codes of the Underworld (Princeton). Steffen Hertog is associate professor of comparative politics at the London School of Economics. He is the author of Princes, Brokers, and Bureaucrats.

"This is an important study. . . . The wealth of statistical data they bring to bear provides what was once a hypothesis with solid empirical grounding."—Malise Ruthven, Financial Times

"That's really good work, and they deserve credit for that observation…. It is thrilling and intriguing as a theoretical issue."—Jeffrey I. Victoroff, University of Southern California Keck School of Medicine, , Chronicle of Higher Education

"[They] really help us refine our understanding of what the risk factors are."—Jessica Stern, Boston University Pardee School of Global Studies, Chronicle of Higher Education

"Intriguing. . . . There's a clear need to try and understand the motivation for this breed of terrorism that Gambetta and Hertog address in a thorough way that avoids alarmism."—Dominic Lenton, Engineering & Technology

"Opening up markedly new perspectives on the motivations of political violence, Engineers of Jihad yields unexpected answers about the nature and emergence of extremism."—Islam and Muslim Societies

"This relatively small book breaks significant new ground and should generate many more significant studies in this area. It should prove to be an important waystation on the path to better understanding not only of violent Islamism but of other political and politico-religious phenomena. It deserves a wide readership among those seriously interested in these subjects."—William Shepard, Journal of Global Analysis

"This outstanding book persuasively examines the relationship between education and radicalisation and provides the best account to date of why some engineers join violent extremist groups."—Diego Muro, Terrorism and Political Violence

"Fascinating. . . . The book is rich in data analysis and provides an interesting look into the memberships of Muslim and non-Muslim militant organizations in a way that adds to existing empirical studies on these groups' histories, narrative construction, and ideologies."—Christopher Anzalone, Muslim World Book Review

"This magnificent treatise combines a deep concern for one of the grave problems of our age—the recruitment of jihadists intent on terrorizing the world—with a Sherlock Holmes approach to a solution. Arthur Conan Doyle might have named the story—had this been fiction—‘the case of the engineers who barked too loudly.' As readers discover ‘who dunnit' and why, they learn to separate popular myths about Islamic terrorism from what makes jihadists tick."—David D. Laitin, Stanford University

"Engineers of Jihad should take a front-and-center position on the bookshelves of anyone trying to understand jihad in the context of radicalization—Diego Gambetta and Steffen Hertog have clearly made an invaluable contribution at a pivotal time in history."—Raphael Perl, executive director of the Partnership for Peace Consortium of Defense Academies and Security Studies Institutes

"A groundbreaking study that is also compulsively readable, representing the very best example of social science methods applied to the study of terrorism. . . . An analytically rigorous work that reads like a mystery, even as it teaches us how empirical research on terrorism should be conducted."—Jessica Stern, coauthor of ISIS: The State of Terror

"This book offers a detailed analysis of the curious overrepresentation of engineers in militant Islamist groups and presents a line of inquiry that is new to the field—namely the study of the relationship between political inclinations and personality traits. The book's originality, sharp focus, and analytical rigor set it apart, and it is likely to become a classic on radical political activism."—Thomas Hegghammer, Norwegian Defence Research Establishment