How diversity and difference strengthen democracy and increase prosperity 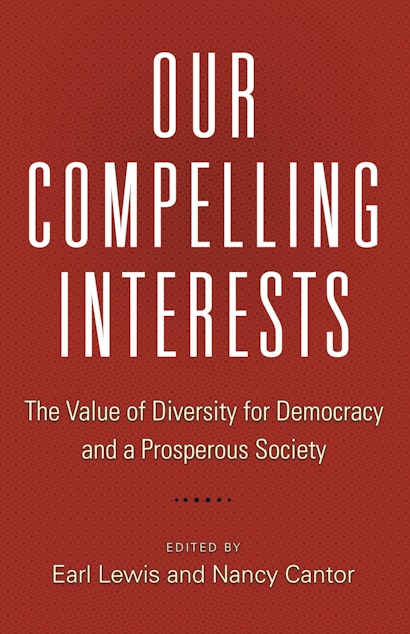 It is clear that in our society today, issues of diversity and social connectedness remain deeply unresolved and can lead to crisis and instability. The major demographic changes taking place in America make discussions about such issues all the more imperative. Our Compelling Interests engages this conversation and demonstrates that diversity is an essential strength that gives nations a competitive edge. This inaugural volume of the Andrew W. Mellon Foundation’s Our Compelling Interests series illustrates that a diverse population offers our communities a prescription for thriving now and in the future.

This landmark essay collection begins with a powerful introduction situating the demographic transitions reshaping American life, and the contributors present a broad-ranging look at the value of diversity to democracy and civil society. They explore the paradoxes of diversity and inequality in the fifty years following the civil rights legislation of the 1960s, and they review the ideals that have governed our thinking about social cohesion—such as assimilation, integration, and multiculturalism—before delving into the new ideal of social connectedness. The book also examines the demographics of the American labor force and its implications for college enrollment, graduation, the ability to secure a job, business outcomes, and the economy. Contributors include Danielle Allen, Nancy Cantor, Anthony Carnevale, William Frey, Earl Lewis, Nicole Smith, Thomas Sugrue, and Marta Tienda. Commentary is provided by Kwame Anthony Appiah, Patricia Gurin, Ira Katznelson, and Marta Tienda.

At a time when American society is swiftly being transformed, Our Compelling Interests sheds light on how our differences will only become more critical to our collective success.

"For a collection of essays, the book is well organized and unusually coherent. Each of the essays makes important contributions to what is likely among the most important challenges the US will face in the twenty-first century. Though balanced, the overall tone is optimistic."—Choice

"Lewis and Cantor have assembled a remarkable slate of top-tier talents to offer insights on a topic of utmost significance—the fact and value of diversity in a twenty-first-century world. Making it clear that a demographic revolution is upon us, this illuminating and riveting book offers new ways of seeing and thriving in a world hurtling toward the future."—Henry Louis Gates Jr., Harvard University

"The United States is irrevocably becoming more diverse from racial, ethnic, religious, language, intermarriage, and country-of-origin perspectives. In what ways is this growing diversity a strategic advantage for the country? Our Compelling Interests contains essays prepared by leading scholars who have done fundamental research on the value of diversity for a more democratic and prosperous society. Whether optimistic or pessimistic, the contributions in this book are a must-read and raise issues that we all need to confront honestly and aggressively."—Paul L. Joskow, president of the Alfred P. Sloan Foundation

"Our nation's unofficial motto is e pluribus unum—out of many, one. America's diversity has enriched our economy, culture, and well-being, making the United States strong and dynamic. However, as America grows even more diverse, tensions have grown too. In light of this troubling trend, we are in dire need of thoughtful commentary and objective research that cuts across the rhetoric. Our Compelling Interests does exactly that. Presenting the value of diversity for our society in a measured, thought-provoking way, this excellent work should be widely read."—Vartan Gregorian, president of the Carnegie Corporation of New York

"From my vantage point in Miami, which already looks like America's majority-minority future, it is easy to accept the research and arguments in Our Compelling Interests. This essay collection shows that diversity can be an economic strength, but the book goes even deeper, asking whether democracy can flourish without successfully connecting people in a society so diverse it defies our traditional definitions. These questions are at the core of who we are and who we want to be."—Alberto Ibargüen, president of the John S. and James L. Knight Foundation

"Earl Lewis and Nancy Cantor have produced an essential book—something that is both transparently important and timely."—Jelani Cobb, staff writer for The New Yorker