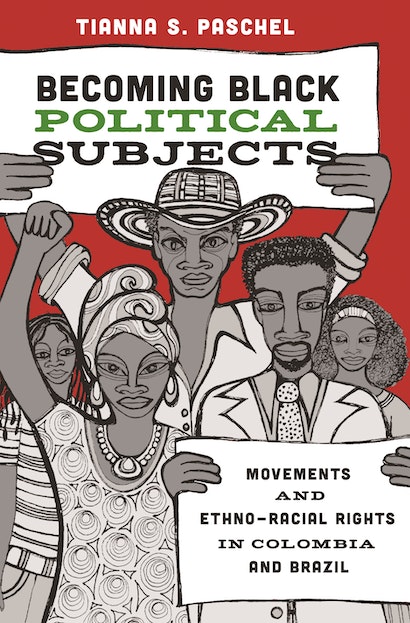 After decades of denying racism and underplaying cultural diversity, Latin American states began adopting transformative ethno-racial legislation in the late 1980s. In addition to symbolic recognition of indigenous peoples and black populations, governments in the region created a more pluralistic model of citizenship and made significant reforms in the areas of land, health, education, and development policy. Becoming Black Political Subjects explores this shift from color blindness to ethno-racial legislation in two of the most important cases in the region: Colombia and Brazil.

Drawing on archival and ethnographic research, Tianna Paschel shows how, over a short period, black movements and their claims went from being marginalized to become institutionalized into the law, state bureaucracies, and mainstream politics. The strategic actions of a small group of black activists—working in the context of domestic unrest and the international community’s growing interest in ethno-racial issues—successfully brought about change. Paschel also examines the consequences of these reforms, including the institutionalization of certain ideas of blackness, the reconfiguration of black movement organizations, and the unmaking of black rights in the face of reactionary movements.

Tianna S. Paschel is assistant professor of African American Studies at the University of California, Berkeley.

"Tianna S. Paschel has written a beautiful book all around. All chapters are beautifully written and edited; the arguments and insights presented are thoughtful and highly relevant, testifying to Paschel's intimate knowledge of the racial politics in both countries studies and to the eight years of research she conducted for this book. Everything comes together to form an impressive, informative, and well-researched academic book. . . . Becoming Black Political Subjects is certainly a must-read for anybody studying racial politics and social movements in Brazil, Colombia, or the Americas more broadly."—Bernd Reiter, Perspectives on Politics

"Documenting the shift towards ethno-racial reforms in two countries seems an ambitious task, but it is exceptionally well taken on by Paschel. By keeping an eye open for ideological and institutional changes lying beyond the nation-state, she merges both cases into one coherent narrative. What is more, by connecting the substantial achievements of marginalized black movements to transnational discourses of multiculturalism and racial equality, Paschel convincingly lays bare the limitations of state- and activist-centric theories of social movements."—Jesse Jonkman, European Review of Latin American and Caribbean Studies

"Detailed in her investigation and broad in her conclusions, Paschel makes an important contribution to the sociology of race and social movements, as well as to substantive debates about multiculturalism in the Americas. . . . Becoming Black Political Subjects deserves wide readership for its ambitious design and execution. . . . To my knowledge, this book provides the most in-depth analysis of the rise and reverberations of black rights in the region."—Michael Rodríguez-Muñiz, American Journal of Sociology

"Becoming Black Political Subjects adroitly crosses disciplines to parse out the legal, ideational, and institutional implications of black political mobilization in Colombia and Brazil. Tianna Paschel ferrets out the tensions between activists and organizations identified with state power on the one hand, and more popular forms of consciousness raising and mobilization on the other. Conceptually innovative, methodologically rigorous, and wide-ranging, this book is an extraordinary piece of scholarship."—Michael Hanchard, University of Pennsylvania

"A pathbreaking study of political change, Becoming Black Political Subjects puts the dynamics of cultural and institutional group recognition on center stage. Paschel innovatively weaves a close analysis of transnational processes into two beautifully executed national case studies. Her book is a game changer in the rapidly growing field of comparative racial analysis."—Michèle Lamont, coauthor of Getting Respect: Responding to Stigma and Discrimination in the United States, Brazil, and Israel

"In the last few years, countries like Brazil and Colombia have adopted affirmative ethno-racial policies that just two decades ago would have seemed unthinkable. How did this sudden change come about? And what are its consequences for the activists and individuals that mobilized around racial justice? Timely, provocative, and rigorous, Becoming Black Political Subjects sheds light on these topics and more. This groundbreaking book is political sociology at its best."—Gianpaolo Baiocchi, New York University

"This carefully argued, deeply researched book maps the dramatic transformation of an older model of Latin American nationalism—predicated in part on disprivileging black subjects—to a model seeking racial equality. Tianna Paschel takes an extensive look at how black activist communities in Colombia and Brazil shifted these states from a regime of universal rights refusing black political claims to one recognizing them. Her fine work exemplifies new directions in scholarship regarding race and racism in Latin America and beyond."—David Theo Goldberg, University of California, Irvine

"In this book, Paschel offers nothing less than the most comprehensive and theoretically sophisticated account currently available of contemporary racial politics in Brazil and Columbia. Paschel's direct, sustained, and multidimensional comparison of these two countries provides important and fascinating insights and informs our general understanding of the constraints and opportunities facing a growing number of ethno-racial movements across the region."—Mara Loveman, University of California, Berkeley

"This book compares how blackness has been defined and institutionalized politically in Brazil and Colombia. It makes an important contribution to the study of race and ethnicity in Latin America, as well as to debates in the social sciences about the links between social movements, the state, and the international context."—Luisa Schwartzman, University of Toronto