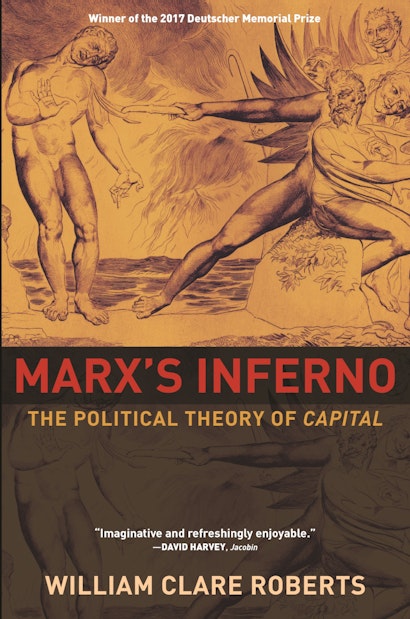 Marx’s Inferno reconstructs the major arguments of Karl Marx’s Capital and inaugurates a completely new reading of a seminal classic. Rather than simply a critique of classical political economy, William Roberts argues that Capital was primarily a careful engagement with the motives and aims of the workers’ movement. Understood in this light, Capital emerges as a profound work of political theory. Placing Marx against the background of nineteenth-century socialism, Roberts shows how Capital was ingeniously modeled on Dante’s Inferno, and how Marx, playing the role of Virgil for the proletariat, introduced partisans of workers’ emancipation to the secret depths of the modern “social Hell.” In this manner, Marx revised republican ideas of freedom in response to the rise of capitalism.


Combining research on Marx’s interlocutors, textual scholarship, and forays into recent debates, Roberts traces the continuities linking Marx’s theory of capitalism to the tradition of republican political thought. He immerses the reader in socialist debates about the nature of commerce, the experience of labor, the power of bosses and managers, and the possibilities of political organization. Roberts rescues those debates from the past, and shows how they speak to ever-renewed concerns about political life in today’s world.

"Marx's Inferno is highly original and informative. . . . Roberts' insights open up a much broader and deeper reading of Marx. This is an excellent book."—Choice

"The most substantial treatment of Marx’s political theory in recent years."—Daniel Luban, The Nation

"Marx's Infernois the best book of political theory I've read that has been written in the last five years. InterpretingCapitalas an integrated whole, it takes a canonical text we all thought we knew and makes us realize we never knew it at all. This is reading on a grand scale, reading as it was meant to be."—Corey Robin, Brooklyn College and CUNY Graduate Center

"Marx's Inferno provides an innovative reading of Karl Marx's Capital as a work of political theory. The unifying thread of this book is the author's conviction that Marx's work is heavily indebted to a set of broadly republican commitments about the nature of freedom. This original idea not only illuminates Marx's writings, but also contributes to an important area of contemporary research in intellectual history."—David Leopold, University of Oxford