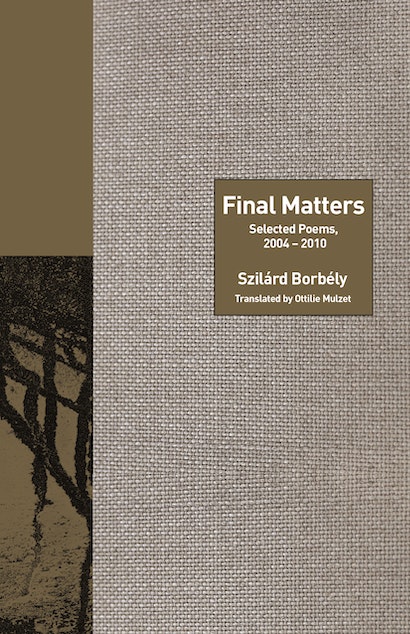 Szilárd Borbély, one of the most celebrated writers to emerge from post-Communist Hungary, received numerous literary awards in his native country. In this volume, acclaimed translator Ottilie Mulzet reveals the full range and force of Borbély’s verse by bringing together generous selections from his last two books, Final Matters and To the Body. The original Hungarian text is set on pages facing the English translations, and the book also features an afterword by Mulzet that places the poems in literary, historical, and biographical context.

Restless, curious, learned, and alert, Borbély weaves into his work an unlikely mix of Hungarian folk songs, Christian and Jewish hymns, classical myths, police reports, and unsettling accounts of abortions. In her afterword, Mulzet calls this collection “a blasphemous and fragmentary prayer book … that challenges us to rethink the boundaries of victimhood, culpability, and our own religious and cultural definitions.”

Szilárd Borbély (1963–2014) wrote in a wide variety of genres. His books include the novel The Dispossessed and the poetry collection Berlin-Hamlet. Ottilie Mulzet is a literary critic and the translator of The Dispossessed and Berlin-Hamlet, among other books. Her translation of the novel Seiobo There Below by László Krasznahorkai won the 2014 Best Translated Book Award. She lives in Prague.

"Ottilie Mulzet . . . [is] the translator of Final Matters: ­Selected Poems, 2004-2010 by Szilárd Borbély. Borbély’s mother was murdered by a couple of crazed robbers. Some poems work through that tragedy toward a larger meditation on death and life. In others, with startling ­images drawn from documentary materials, Borbély writes mystical lyrics, polytheistic parables and Hasidic sequences too powerful to forget. Like Japan’s wondrous Motoyuki Shibata, ­Ottilie Mulzet has become a translator with a following. I’m one of those committed to reading anything she takes up."—Forrest Gander, Wall Street Journal

"The posthumous Final Matters: Selected Poems, 2004–2010, published last year in a bilingual edition and likewise translated by Mulzet into elegant and tonally astute English for Princeton’s Lockert Library of Poetry in Translation series (edited by Peter Cole, Richard Sieburth, and Rosanna Warren) is the last installment in this lifelong study of devastation."—Carla Baricz, Los Angeles Review of Books

"The poetry of Final Matters is a tremendous achievement, and shows that Borbély should be considered not just among the great writers of post-Soviet Europe, but also of contemporary Judaism."—Daniel Kraft, Jewish Currents

"Final Matters is Borbely's 'painted bleeding'; the poetic craft and rhetorical strategies employed in the collection allow him to keep hidden the unspeakable personal trauma whilst at the same time revealing the questions this and other such acts of extreme violence ask of us all. . . . At times, Borbely devastates, but the material is never gratuitous, however heartbreaking: and there is always, somewhere, a shred of faith, of hope, hard won—he is a poet who writes against oblivion."—Tony Flynn, High Window

"The title of this book gives a powerful clue as to its contents. For what Szilárd Borbély has given us here is a book of death. In line after line of spare and devastating poetry, he goes into the heart of darkness, and invites us, with an eery calm, to go there with him. Once you have done so, you will not be the same again."—Barney Bardsley, Hungarian Literature Online

"Any reader will find a mine full of treasure within Final Matters, and every reader of poetry should have a copy of this excellent translation of Borbély's masterful work."—Bruce Arlen Wasserman, New York Journal of Books

"[Final Matters by Szilárd Borbély and translated by Ottie Mulzet] is stirring and unlike any other book I have read, and the bilingual format is important — as it preserves the original Hungarian, and fights against the trend of making it seem like all literature is written in English . . . Mulzet has undoubtedly brought readers a great gift by bringing these multi-layered poems into English."—Aviya Kushner, Forward

"Extraordinary, masterful, and tragic. . . . Ottilie Mulzet is one of the very finest [Hunagrian translators]. . . . [Final Matters] as a whole partakes of the darkest and truest apprehensions of humanity. That is its remarkable power, a power that runs through the translations, the work of translation devoting itself to something of great importance and value. Nothing in either contemporary Hungarian or contemporary English compares with it."—George Szirtes, Translation and Literature

"Szilárd Borbély's life’s work is as significant as it is tragic. He was a poet—a great poet—who shatters us."—László Krasznahorkai, winner of the Man Booker International Prize

“Szilárd Borbély was one of the best and most original poets and novelists of his generation—and Ottilie Mulzet is a wonderful translator of his work: her ear for nuance is excellent and precise.”—George Szirtes, award-winning poet and translator