A sweeping history of Ireland's native gods, from Iron Age cult and medieval saga to the Celtic Revival and contemporary fiction 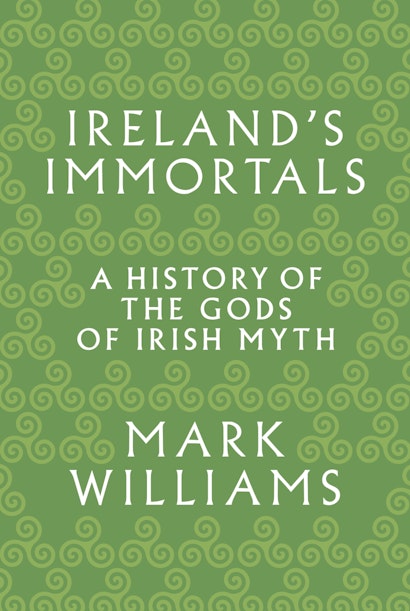 Ireland’s Immortals tells the story of one of the world’s great mythologies. The first account of the gods of Irish myth to take in the whole sweep of Irish literature in both the nation’s languages, the book describes how Ireland’s pagan divinities were transformed into literary characters in the medieval Christian era—and how they were recast again during the Celtic Revival of the late nineteenth and early twentieth centuries. A lively narrative of supernatural beings and their fascinating and sometimes bizarre stories, Mark Williams’s comprehensive history traces how these gods—known as the Túatha Dé Danann—have shifted shape across the centuries. We meet the Morrígan, crow goddess of battle; the fire goddess Brigit, who moonlights as a Christian saint; the fairies who inspired J.R.R. Tolkien’s elves; and many others. Ireland’s Immortals illuminates why these mythical beings have loomed so large in the world’s imagination for so long.

Mark Williams is Fitzjames Fellow in Medieval English at Merton College, University of Oxford, and Lecturer in Celtic in the Faculty of Medieval and Modern Languages.

"Far too much writing on Irish mythology is disturbingly superficial, and that makes a book as comprehensive and learned as this one a welcome addition."—Juliette Wood, Folklore

“[A] fascinating history…. Williams … is equally at home in the arcana of Old Irish texts and modern English-language writing, and it is this range of erudition that has allowed him to write the first full overview of the long twilight of the Irish gods.”—Fintan O’Toole, New York Review of Books

“Williams has a wealth of insight for his readers. No book like this has ever been written before; and all who seek to gain a better sense of its subjects … will be in its author’s debt.”—John Carey, Studia Celtica

“What is really impressive in this book is Mark Williams’s ability to bring together modern English and medieval Irish literature…. It is a beautifully written analysis, bursting with ideas and new insights.”—Clare Downham, International Yeats Studies