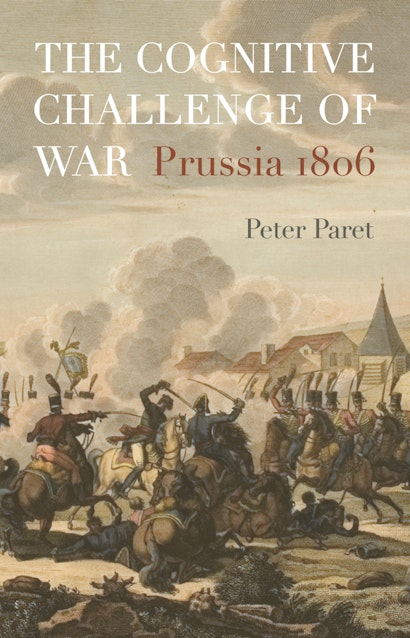 Responding to the enemy’s innovation in war presents problems to soldiers and societies of all times. This book traces Napoleon’s victory over Prussia in 1806 and Prussia’s effort to recover from defeat to show how in one particular historical episode operational analyses together with institutional and political decisions eventually turned defeat to victory.

The author moves from a comparative study of French and Prussian forces to campaign narrative and strategic analysis. He examines processes of change in institutions and doctrine, as well as their dependence on social and political developments, and interprets works of art and literature as indicators of popular and elite attitudes toward war, which influence the conduct of war and the kind and extent of military innovation. In the concluding chapter he addresses the impact of 1806 on two men who fought on opposing sides in the campaign and sought a new theoretical understanding of war—Henri Jomini and Carl von Clausewitz.

Fields of history that are often kept separate are brought together in this book, which seeks to replicate the links between different areas of thought and action as they exist in reality and shape events.

Peter Paret is professor emeritus at the Institute for Advanced Study. He has written widely on the history of war and society and on the relationship of art, society, and politics. He is the author of Clausewitz and the State (Princeton), now in its third revised edition. Most recently he gave the 2008 Lees Knowles Lectures at Cambridge University, on which this book is based, and was guest curator for the spring 2009 exhibition Myth and Modernity at the Princeton University Art Museum.

"Peter Paret's small book is masterfully constructed. He has set out to 'consider specific events' without losing sight of the general issues they exemplify."—Thomas Rid, Weekly Standard

"Given the importance of the topic and Paret's exceptional expertise, his new book on 1806 must arouse considerable interest. . . . If this handsome little book does not fulfill the need for a comprehensive study of the Prussian reform, it does provide a brief, intelligent, and artful recapitulation of some of the period's major themes."—Eugenia C. Kiesling, Michigan War Studies Review

"The Cognitive Challenge of War offers a welcome alternative to the usual historiographic ping-pong about the War of the Fourth Coalition. . . . Rather than weighing in on the traditional arguments about skirmishers and linear tactics or the corps d'armee system, Peter Paret has offered an intriguing bridge between social history and military history."—Sam A. Mustafa, Journal of Military History

"[E]xperts of the subject and readers of Paret's earlier works will not find many new insights in this short book, but for them and for everybody who is interested in the subject, it offers an excellent and elegantly written overview on Prussia in 1806 and the responses to the defeat of its army."—Karen Hagemann, Journal of Central European History

"A valuable study for anyone interested in the Napoleonic era, military reform, or the Prusso-German military experience."—A. A. Nofi, Strategy Page

"[T]his book is a major achievement that few historians could even have tried to undertake, and the reader will be richly rewarded by the unusually comprehensive perspective and the many compelling insights. Anybody interested in Prussian history of the nineteenth century, Napoleonic military history, military and strategic theory, or the history of military innovation will find the price well worth paying."—Claus Telp, European History Quarterly

"Paret writes profoundly on the Prussian military reforms and on the ideas that underpinned them. . . . His greatest success . . . is in revealing [the] linkage . . . between the ideas of the military reformers, Clausewitz amongst them, and the broader cultural trends at the turn of the eighteenth and nineteenth centuries."—Michael Rowe, European Review of History

"Paret's achievement in this elegant extended essay is to show how On War emerged not just from the wreckage of Jena-Auerstadt, but also from the political, social, artistic, and literary context in which it was conceived."—Alex Roland, ISIS

"Peter Paret is one of the very few scholars capable of addressing what he calls the cognitive challenge of war—the sad fact that those who wage war are often surprised by its unintended consequences and baffled by its dynamic range. This graceful and nuanced book should stand as a classic study of this problem."—John Shy, professor emeritus of history, University of Michigan

"This is a wonderful book—cogently and concisely argued, elegantly written, and displaying a vast depth of knowledge. It is a sustained, mature, and authoritative reflection on a subject that Peter Paret knows intimately, and it will delight a wide range of readers. While there is a great deal of talk nowadays about 'new cultural approaches' to military history, this book is the real thing; it should be viewed as a major event."—Robert Citino, author of The German Way of War: From the Thirty Years' War to the Third Reich