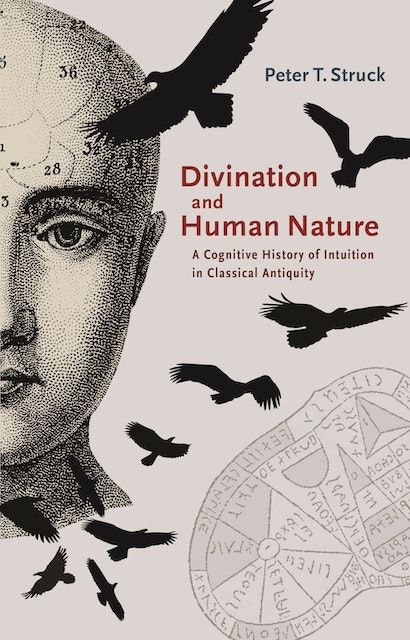 Divination and Human Nature casts a new perspective on the rich tradition of ancient divination—the reading of divine signs in oracles, omens, and dreams. Popular attitudes during classical antiquity saw these readings as signs from the gods while modern scholars have treated such beliefs as primitive superstitions. In this book, Peter Struck reveals instead that such phenomena provoked an entirely different accounting from the ancient philosophers. These philosophers produced subtle studies into what was an odd but observable fact—that humans could sometimes have uncanny insights—and their work signifies an early chapter in the cognitive history of intuition.

Examining the writings of Plato, Aristotle, the Stoics, and the Neoplatonists, Struck demonstrates that they all observed how, setting aside the charlatans and swindlers, some people had premonitions defying the typical bounds of rationality. Given the wide differences among these ancient thinkers, Struck notes that they converged on seeing this surplus insight as an artifact of human nature, projections produced under specific conditions by our physiology. For the philosophers, such unexplained insights invited a speculative search for an alternative and more naturalistic system of cognition.

Recovering a lost piece of an ancient tradition, Divination and Human Nature illustrates how philosophers of the classical era interpreted the phenomena of divination as a practice closer to intuition and instinct than magic.

Peter T. Struck is the Evan C. Thompson Term Professor of Classical Studies at the University of Pennsylvania. He is the author of Birth of the Symbol: Ancient Readers at the Limits of Their Texts (Princeton).

"The core of this beautifully researched and lucidly argued book is a study of the most important and influential philosophical analyses of divination from the ancient world."—Brad Inwood, Times Literary Supplement

"An absorbing work of intellectual history, demonstrating a confident command of the philological and philosophical issues, and lucidly exploring Greek philosophical engagement with the epistemological and theological puzzles presented by divination. The book offers a fresh approach to the topic of divination by juxtaposing it with ancient and modern theories of cognition, and by moving past the debate over the (ir)rationality of the practice. . . . I hope that this excellent study will stimulate further research into such questions."—Jennifer Larson, Bryn Mawr Classical Review

"[Struck] opens up an amazing clear view of the diverse epistemologies and ontologies of the Classical era. . . . Struck offers an account of Classical divination which is more than detailed enough to satisfy fellow Classicists while also offering insights to those outside the discipline."—Bob Trubshaw, Time & Mind

"There is much in Struck’s carefully argued and well researched volume to attract the attention of anyone seriously interested in ancient philosophy, and particularly in the figures of Plato, Aristotle, Posidonius, and Iamblicus. . . . The book truly is a historical and philosophical treasure trove, and it deserves wide attention."—Massimo Pigliucci, Journal of Cognitive Historiography

"A fascinating book and an important contribution to the history of intuition in the ancient world, since Struck takes a significantly different set of texts and assumptions than previous studies of divination/intuition."—Larry Swain, Mythlore

"How could sophisticated thinkers like Plato, Aristotle, and the Stoics accept divination as a valid source of knowledge? In this fascinating book, Peter Struck shows how the ancients viewed divination as seriously as we view the idea of intuition, and he reveals a deep structure of interpretation still of interest today."—David Konstan, author of Beauty: The Fortunes of an Ancient Greek Idea

"This wonderfully interesting book marshals a great deal of information about ancient philosophy in order to make the fascinating argument that what we call divination would have been familiar to ancient intellectuals under Greek terms that we now translate as ‘intuition.' It is a major step forward in understanding the concept of divination in ancient Greece and Rome."—Sarah Iles Johnston, author of Ancient Greek Divination

"A novel account of the concepts of intuition in the ancient world, this book is a remarkable study of how these concepts were clothed in the language of divination. Struck traces this history of divination-as-intuition through some of the most important surviving ancient texts on the subject. His tremendously stimulating book is replete with fresh insights and makes a significant contribution to the histories of ancient philosophy and religion."—Phillip Horky, Durham University