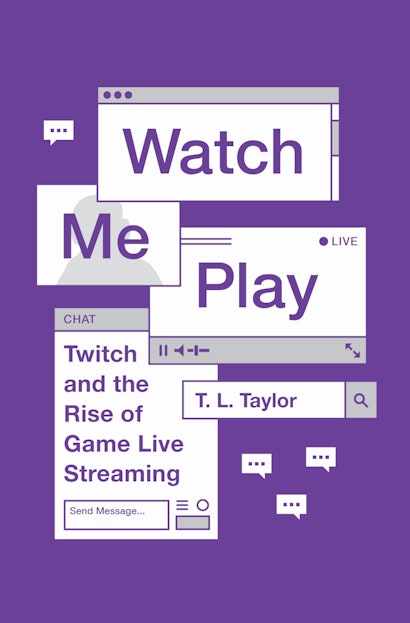 Every day thousands of people broadcast their gaming live to audiences over the internet using popular sites such as Twitch, which reaches more than one hundred million viewers a month. In these new platforms for interactive entertainment, big esports events featuring digital game competitors live stream globally, and audiences can interact with broadcasters—and each other—through chat in real time. What are the ramifications of this exploding online industry? Taking readers inside home studios and backstage at large esports events, Watch Me Play investigates the rise of game live streaming and how it is poised to alter how we understand media and audiences.

Through extensive interviews and immersion in this gaming scene, T. L. Taylor delves into the inner workings of the live streaming platform Twitch. From branding to business practices, she shows the pleasures and work involved in this broadcasting activity, as well as the management and governance of game live streaming and its hosting communities. At a time when gaming is being reinvented through social media, the potential of an ever-growing audience is transforming user-generated content and alternative distribution methods. These changes will challenge the meaning of ownership and intellectual property and open the way to new forms of creativity.

The first book to explore the online phenomenon Twitch and live streaming games, Watch Me Play offers a vibrant look at the melding of private play and public entertainment.

T. L. Taylor is professor of comparative media studies at the Massachusetts Institute of Technology. Her books include Raising the Stakes and Play between Worlds.

"[Taylor’s] work expertly builds a historical framework for Twitch and outlines how patterns of behavior have evolved on the platform without overcommitting to any last-word assessments of its influence [and] also demonstrates how invigorating academic scholarship can be when it tries to tackle a subject still in formation."—Jacob Merten, The Velvet Light Trap

"well worth reading. . . [A] timely, wide-ranging introduction to, immersion in, and analysis of, Twitch and game live streaming."—Helle Breth Klausen, MedieKultur

"Watch Me Play is an accessible text that both legitimizes academic inquiry into live streaming and provides a concrete base from which to build. Taylor uses comprehensible language to explain nuanced practices from gaming, legal, academic, and financial contexts, making this book useful for academics and students, as well as consumers, producers, streamers, and designers."—Janelle Malagon, Popular Culture Studies

“Interest in online streaming platforms, especially for games and Twitch, is at its height. This timely and urgently needed book successfully conveys the technical, legal, emotional, and social complexities of what people are doing in Twitch. Providing a nuanced and close-to-the-ground analysis, Watch Me Play will be the go-to work for learning about this gaming experience.”—Thomas M. Malaby, author of Making Virtual Worlds: Linden Lab and Second Life

“Based on years of immersion and research, Watch Me Play is a masterful book and covers an area that has not received much serious study before. Using rich and inventive methods, Taylor makes a compelling argument for thinking about games across media. I loved the writing and learned a great deal.”—Jonathan Sterne, author of MP3: The Meaning of a Format

“If you’ve ever wondered why anyone would watch someone else playing videogames, this book is for you. Deep, analytical, and comprehensive, Watch Me Play is the greatest written resource on the complex world of internet streaming.”—Paul Chaloner, managing director of Code Red Esports