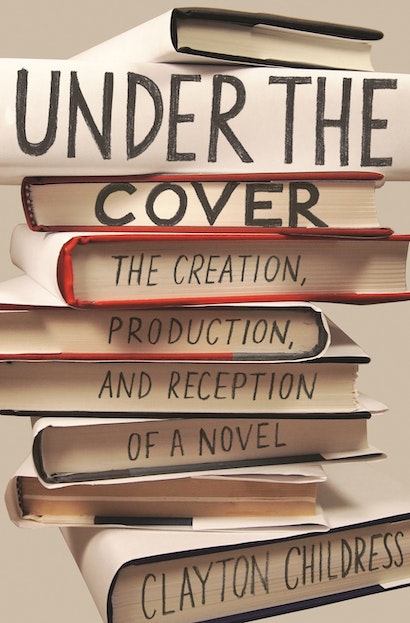 Under the Cover follows the life trajectory of a single work of fiction from its initial inspiration to its reception by reviewers and readers. The subject is Jarrettsville, a historical novel by Cornelia Nixon, which was published in 2009 and based on an actual murder committed by an ancestor of Nixon’s in the postbellum South.

Clayton Childress takes you behind the scenes to examine how Jarrettsville was shepherded across three interdependent fields—authoring, publishing, and reading—and how it was transformed by its journey. Along the way, he covers all aspects of the life of a book, including the author’s creative process, the role of the literary agent, how editors decide which books to acquire, how publishers build lists and distinguish themselves from other publishers, how they sell a book to stores and publicize it, and how authors choose their next projects. Childress looks at how books get selected for the front tables in bookstores, why reviewers and readers can draw such different meanings from the same novel, and how book groups across the country make sense of a novel and what it means to them.

Drawing on original survey data, in-depth interviews, and groundbreaking ethnographic fieldwork, Under the Cover reveals how decisions are made, inequalities are reproduced, and novels are built to travel in the creation, production, and consumption of culture.

Clayton Childress is assistant professor of sociology at the University of Toronto.

"Under the Cover is well-plotted, making use of the kind of narrative device—a three-act structure, revealing details, even cliff-hangers—one might find in an actual novel, all of which is underpinned by insightful observations of the many writers, agents, editors, publishers, booksellers, readers and others Childress studies. . . . An engaging story about the interface of the word and the world."—Megan Marz, Times Literary Supplement

"Written with great love, accuracy, attention for every little detail, it is extremely clear in the exposition of the various steps of the creation of a book it's a great reading, captivating and interesting! Intriguing from the beginning to the end, this book can't be put down for a second."—Anna Maria Polidori, Alfemminile

"In this excellent contribution to the study of literature and of the sociology of culture, Childress situates a specific cultural object—Cornelia Nixon's novel Jarrettsville (2009)—within the many contexts responsible for its birth and integration into the social fabric. In so doing, he reasserts the social nature of cultural products, a claim at the cornerstone of sociology as a discipline. . . . This work is interesting as a study of the evolving role of literature in modern life, and sociologists will learn from its unique approach to analyzing cultural products."—Choice

"Even someone who is part of the publishing system as an author is unaware of how the soup is made, and there can be no more fascinating, enjoyable, insightful, and well-written a guide to what goes on in the publishing kitchen than Clayton Childress’ wonderful Under the Cover."—Mitchell Abidor, Jewish Currents

"Under the Cover is a significant contribution to work on cultural objects. Readers, prepared to be bowled over by the wealth of data Childress collected and the depth of his analyses. I certainly was. If you know you’ve read a good book when you’re jealous that you didn’t write it yourself, then color me green. To sum up, permit me to poach the words of Ayelet Waldman: 'This is a fucking AWESOME book.'"—Terence E. McDonnell, Social Forces

"It is to Childress’s credit that Under the Cover does not announce itself as a program for the study of culture; such claims are more persuasive as demonstrations rather than pronouncements. Those who are open to the demonstration will note that in the guise of a lucid, lively study of a single novel, Under the Cover points the way to an arduous but richly rewarding approach to studying cultural life in general."—Ben Merriman, American Journal of Sociology

"This beautifully written and deeply insightful book does just what its title indicates: it gets ‘under the cover’of a historical literary novel and follows it through its full life cycle, from inception to birth and beyond."—Heather Haveman, Administrative Science Quarterly

"Innovatively imagined, deliciously detailed, exhaustively explained—Under the Cover tells curious readers as complete a story as they are ever likely to find of the genesis and eventual fate of a contemporary novel."—Howard S. Becker, author of Art Worlds

"Under the Cover sparkles with insights. Childress has given us the richest biography of a book—from womb to tomb, so to speak—that we are likely to see."—Wendy Griswold, author of American Guides: The Federal Writers' Project and the Casting of American Culture

"Superb. Childress knits together ordinarily separate domains of research to track the life of a work of art—the novel Jarrettsville—from conception through consumption. His important book is a major contribution to the sociology of culture."—Paul J. DiMaggio, coeditor of the Princeton Studies in Cultural Sociology series