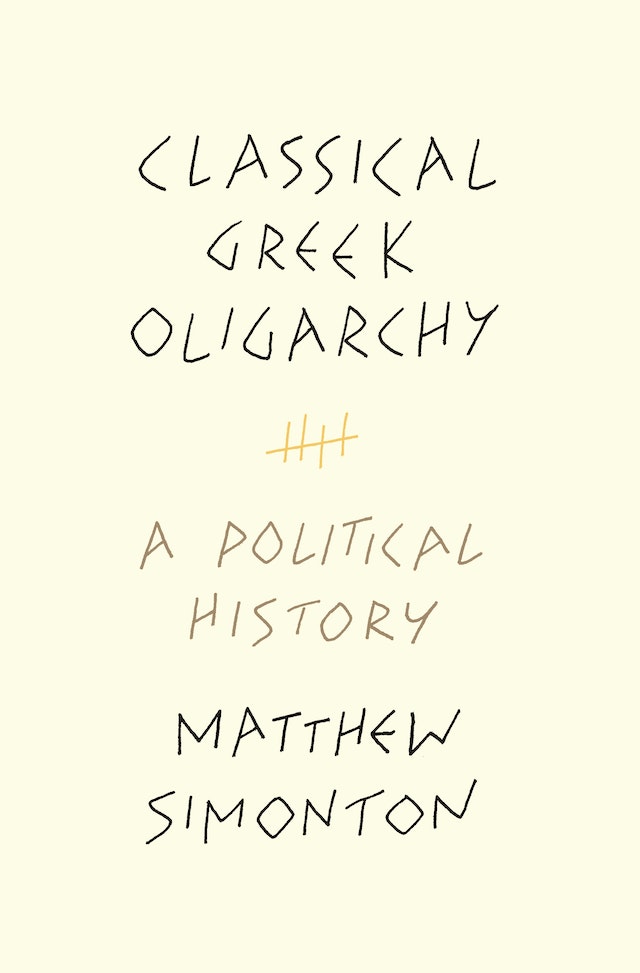 Classical Greek Oligarchy thoroughly reassesses an important but neglected form of ancient Greek government, the “rule of the few.” Matthew Simonton challenges scholarly orthodoxy by showing that oligarchy was not the default mode of politics from time immemorial, but instead emerged alongside, and in reaction to, democracy. He establishes for the first time how oligarchies maintained power in the face of potential citizen resistance. The book argues that oligarchs designed distinctive political institutions—such as intra-oligarchic power sharing, targeted repression, and rewards for informants—to prevent collective action among the majority population while sustaining cooperation within their own ranks.

To clarify the workings of oligarchic institutions, Simonton draws on recent social science research on authoritarianism. Like modern authoritarian regimes, ancient Greek oligarchies had to balance coercion with co-optation in order to keep their subjects disorganized and powerless. The book investigates topics such as control of public space, the manipulation of information, and the establishment of patron-client relations, frequently citing parallels with contemporary nondemocratic regimes. Simonton also traces changes over time in antiquity, revealing the processes through which oligarchy lost the ideological battle with democracy for legitimacy.

Classical Greek Oligarchy represents a major new development in the study of ancient politics. It fills a longstanding gap in our knowledge of nondemocratic government while greatly improving our understanding of forms of power that continue to affect us today.

Matthew Simonton is assistant professor of history in the School of Humanities, Arts, and Cultural Studies at Arizona State University. He received his PhD in classics from Stanford University.

"In contrast to the huge amount of work done on ancient and modern democracy and democrats, there is a yawning absence of work on ancient—or modern—oligarchs and oligarchy. That gap is now triumphantly filled by Matthew Simonton's brilliant book on oligarchy in the ancient Greek world."—Paul Cartledge, author of Democracy: A Life

"This is the first full-length study of Greek oligarchy as a regime type in more than a century. Well-crafted and multilayered, this important book does much more than situate oligarchy within the spectrum of Greek and Aristotelian regimes; it argues the provocative new thesis that oligarchy came into existence in the early fifth century BCE as a reaction to democracy, and it seeks to understand how, despite being unpopular and authoritarian, oligarchies thrived throughout the fifth and fourth centuries."—Peter van Alfen, Margaret Thompson Curator of Ancient Greek Coins, American Numismatic Society