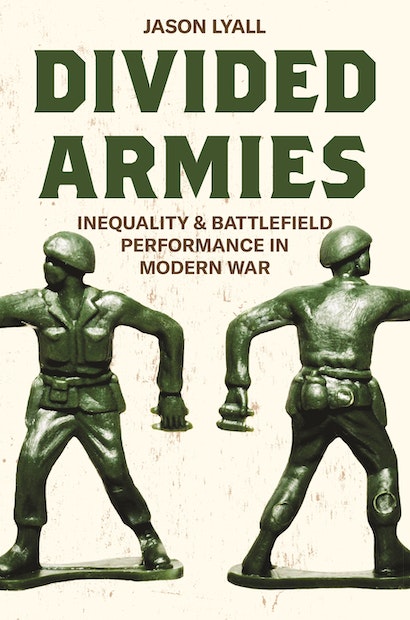 How do armies fight and what makes them victorious on the modern battlefield? In Divided Armies, Jason Lyall challenges long-standing answers to this classic question by linking the fate of armies to their levels of inequality. Introducing the concept of military inequality, Lyall demonstrates how a state’s prewar choices about the citizenship status of ethnic groups within its population determine subsequent battlefield performance. Treating certain ethnic groups as second-class citizens, either by subjecting them to state-sanctioned discrimination or, worse, violence, undermines interethnic trust, fuels grievances, and leads victimized soldiers to subvert military authorities once war begins. The higher an army’s inequality, Lyall finds, the greater its rates of desertion, side-switching, casualties, and use of coercion to force soldiers to fight.

In a sweeping historical investigation, Lyall draws on Project Mars, a new dataset of 250 conventional wars fought since 1800, to test this argument. Project Mars breaks with prior efforts by including overlooked non-Western wars while cataloguing new patterns of inequality and wartime conduct across hundreds of belligerents. Combining historical comparisons and statistical analysis, Lyall also marshals evidence from nine wars, ranging from the Eastern Fronts of World Wars I and II to less familiar wars in Africa and Central Asia, to illustrate inequality’s effects.

Sounding the alarm on the dangers of inequality for battlefield performance, Divided Armies offers important lessons about warfare over the past two centuries—and for wars still to come.

Jason Lyall is the James Wright Associate Professor in Transnational Studies and associate professor of government at Dartmouth College, where he also directs the Political Violence FieldLab.

"A welcome mingling of the traditions of quantitative and qualitative political science. He sets a rigorous and imaginative methodological standard that others will struggle to match."—Lawrence D. Freedman, Foreign Affairs

"An extraordinary achievement, providing new ideas about the non-material determinants of battlefield performance, and presenting compelling quantitative and qualitative evidence. It will no doubt shape research agendas on war for many years to come."—Journal of Peace Research

"The book provides the theoretical basis for an intuitively grasped characteristic of armed forces around the world today and through history. Its argument should inform future policymaking, as well serve as a basis to re-examine past wars."—Axel Dessein, Wavell Room

"Lyall’s important work arrays data from 250 wars since 1800 to prove systematically what Washington, Grant, and Eisenhower described: that the political compact between a country and its fighting forces is a major determinant in warfare. This beautifully written book brilliantly blends quantitative and qualitative methods to show that what states choose to do about status and belonging—about political identity—before wars decisively affects their forces’ ability to persevere in combat."—Kori Schake, International Institute for Strategic Studies

"Inequality can prove dangerous for the battlefield fate of armies. Lyall, in this smart and timely book, warns us all that the divisions within a community are reflected in the divisions within the armies that represent them—with devastating costs. A critical read for policymakers and scholars alike."—General (Ret.) Stanley McChrystal

"Based on assiduous archival, autobiographical, and historiographic research along with a newly created comprehensive dataset of all conventionally fought wars since 1800, this brilliant page-turner will delight aficionados of military history and open new paths for experts seeking to uncover the correlates of warfare. Lyall’s simple but powerful thesis—ethnic discrimination among units comprising a belligerent army leads to battlefield failure—is original and compelling."—David D. Laitin, Stanford University

"In Divided Armies, Lyall’s argument about the link between military inequality and military effectiveness is smart and novel. The data gathering is extremely impressive, as is the care given to the qualitative and quantitative assessments. I highly recommend it."—Michael C. Horowitz, University of Pennsylvania

"Ambitious in scope, Divided Armies offers a new theory for an important subject: battlefield military effectiveness in conventional wars from the 1800s to the present. Marshaling an impressive array of empirical evidence to support his arguments, Lyall addresses a topic that will interest policymakers, scholars, and readers from a variety of disciplines."—Jasen J. Castillo, Texas A&M University