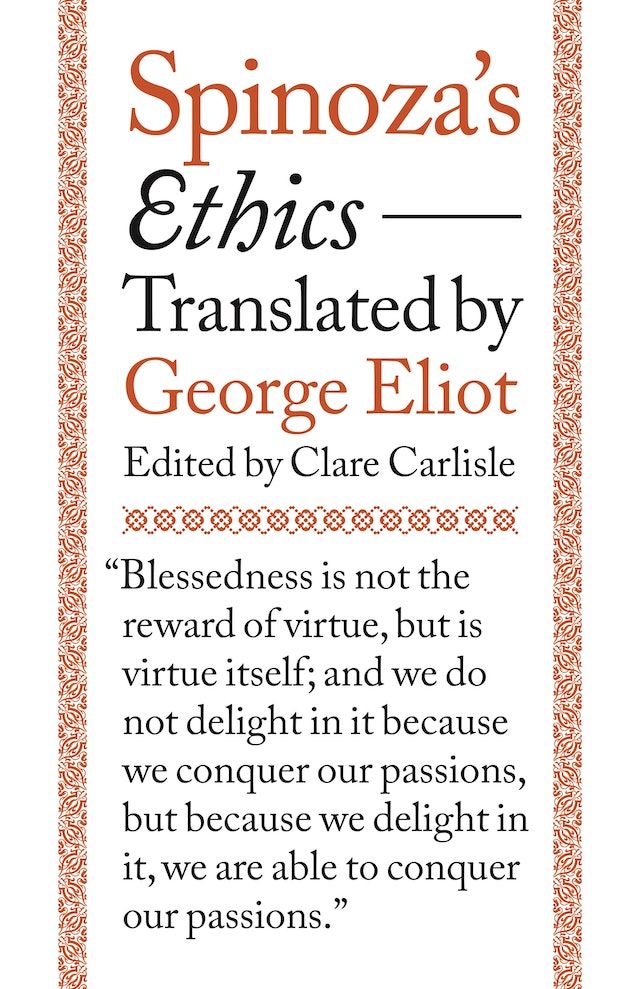 In 1856, Marian Evans completed her translation of Benedict de Spinoza’s Ethics while living in Berlin with the philosopher and critic George Henry Lewes. This would have become the first edition of Spinoza’s controversial masterpiece in English, but the translation remained unpublished because of a disagreement between Lewes and the publisher. Later that year, Evans turned to fiction writing, and by 1859 she had published her first novel under the pseudonym George Eliot. This splendid edition makes Eliot’s translation of the Ethics available to today’s readers while also tracing Eliot’s deep engagement with Spinoza both before and after she wrote the novels that established her as one of English literature’s greatest writers.

Clare Carlisle’s introduction places the Ethics in its seventeenth-century context and explains its key philosophical claims. She discusses George Eliot’s intellectual formation, her interest in Spinoza, the circumstances of her translation of the Ethics, and the influence of Spinoza’s ideas on her literary work. Carlisle shows how Eliot drew on Spinoza’s radical insights on religion, ethics, and human emotions, and brings to light surprising affinities between Spinoza’s austere philosophy and the rich fictional worlds of Eliot’s novels.

This authoritative edition demonstrates why George Eliot’s translation remains one of the most compelling and philosophically astute renderings of Spinoza’s Latin text. It includes notes that indicate Eliot’s amendments to her manuscript and that discuss her translation decisions alongside more recent English editions.

Clare Carlisle is Reader in Philosophy and Theology at King's College London and a regular contributor to the Times Literary Supplement. Her books include Philosopher of the Heart: The Restless Life of Søren Kierkegaard, On Habit, and Kierkegaard's Philosophy of Becoming. She lives in London.

"A very distinguished scholarly edition by Clare Carlisle, valuable to readers of George Eliot as well as students of Spinoza."—Philip Davis, author of The Transferred Life of George Eliot

"This edition of George Eliot's translation of Spinoza's Ethics makes this important text accessible at last. Clare Carlisle provides a concise overview of Spinoza's philosophy and explores his ideas in connection to Eliot's fiction and intellectual life. This fine book will encourage extended analysis of Eliot's relationship to Spinoza's thought, a subject that has been undervalued and underexplored in the criticism."—Suzy Anger, University of British Columbia

"This book is truly exciting, not only as a work of historical scholarship but also as a genuine work of philosophy that brings to the fore another kind of Spinozism that has barely been studied thus far."—Yitzhak Y. Melamed, author of Spinoza’s Metaphysics: Substance and Thought

"It is refreshing to encounter George Eliot from the perspective of a philosopher rather than a literary critic, which in this instance has resulted in one of the most lucid accounts available of the affinities between Spinoza and Eliot's fiction. This welcome edition considerably sharpens our picture of Eliot's early career."—Juliette Atkinson, University College London