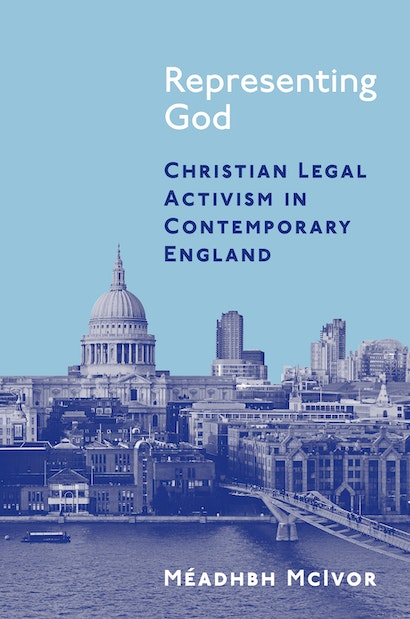 Over the past two decades, a growing number of Christians in England have gone to court to enforce their right to religious liberty. Funded by conservative lobby groups and influenced by the legal strategies of their American peers, these claimants—registrars who conscientiously object to performing the marriages of same-sex couples, say, or employees asking for exceptions to uniform policies that forbid visible crucifixes—highlight the uneasy truce between law and religion in a country that maintains an established Church but is wary of public displays of religious conviction.

Representing God charts the changing place of public Christianity in England through the rise of Christian political activism and litigation. Based on two years of fieldwork split between a conservative Christian lobby group and a conservative evangelical church, Méadhbh McIvor explores the ideas and contested reception of this ostensibly American-inspired legal rhetoric. She argues that legal challenges aimed at protecting “Christian values” ultimately jeopardize those values, as moralities woven into the fabric of English national life are filtered from their quotidian context and rebranded as the niche interests of a cultural minority. By framing certain moral practices as specifically Christian, these activists present their religious convictions as something increasingly set apart from broader English culture, thereby hastening the secularization they seek to counter.

Representing God offers a unique look at how Christian politico-legal activism in England simultaneously responds to and constitutes the religious life of a nation.

Méadhbh McIvor is a junior research fellow at Pembroke College, University of Oxford.

"This carefully argued book looks at the tense relationship between Christian legal activism and the theologies of law and grace as found among Christian lawyers and ordinary churchgoers in England. A pleasure to read, Representing God examines these tensions with sophistication and subtlety."—Joseph Webster, University of Cambridge