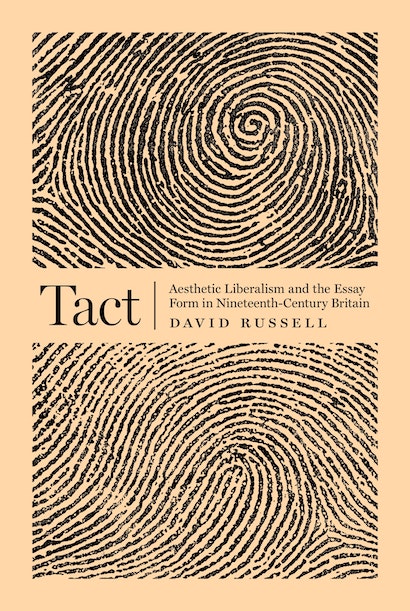 The social practice of tact was an invention of the nineteenth century, a period when Britain was witnessing unprecedented urbanization, industrialization, and population growth. In an era when more and more people lived more closely than ever before with people they knew less and less about, tact was a new mode of feeling one’s way with others in complex modern conditions. In this book, David Russell traces how the essay genre came to exemplify this sensuous new ethic and aesthetic.

Russell argues that the essay form provided the resources for the performance of tact in this period and analyzes its techniques in the writings of Charles Lamb, John Stuart Mill, Matthew Arnold, George Eliot, and Walter Pater. He shows how their essays offer grounds for a claim about the relationship among art, education, and human freedom—an “aesthetic liberalism”—not encompassed by traditional political philosophy or in literary criticism. For these writers, tact is not about codes of politeness but about making an art of ordinary encounters with people and objects and evoking the fullest potential in each new encounter. Russell demonstrates how their essays serve as a model for a critical handling of the world that is open to surprises, and from which egalitarian demands for new relationships are made.

Offering fresh approaches to thinking about criticism, sociability, politics, and art, Tact concludes by following a legacy of essayistic tact to the practice of British psychoanalysts like D. W. Winnicott and Marion Milner.

David Russell is associate professor of English at the University of Oxford and a tutorial fellow of Corpus Christi College.

"One of the brilliances of this book is to suggest that tact as a mode of thinking can be linked to a type of independence, and imaginative intelligence. . . . [It is] at once provocative and generously open-ended, raising questions about what is at stake in any attempt to read and interpret."—Kirsty Martin, Times Literary Supplement

"Learned, beautifully written, and crafted with evident care, Tact is one of those works that, from cover to content, exemplifies the ethos that is its subject."—Los Angeles Review of Books

"Russell’sTact is a brilliant and frequently moving study, arguing passionately for the ways in which a greater openness may lead us into richer engagements with our world and doing this by lifting off the film of familiarity that so often obscures from us the canonical writers of the nineteenth century."—Uttara Natarajan, Review in English Studies

"This is a momentous book. Tact, with its derivation from touch, becomes, for Russell, the art of feeling one's way, an aesthetic, ethical, and political praxis that enables him to reclaim the essay as the core form, democratic and egalitarian, of nineteenth-century culture. Moving from Lamb, through Mill, Arnold, Eliot, and Pater, to the twentieth-century incarnation of tact in the work of Marion Milner, Russell challenges our reading of major figures."—Isobel Armstrong, author of Novel Politics: Democratic Imaginations in Nineteenth-Century Fiction

"A vital experiment in criticism, unlike any I know concerning nineteenth-century prose. David Russell's handling of the essay form, its aesthetics, politics, and history, is continually stimulating."—Andrew H. Miller, author of The Burdens of Perfection: On Ethics and Reading in Nineteenth-Century British Literature

"David Russell has written a book of great insight and feeling that does much to improve our understanding of ethos, empathy, and equanimity. In language that is poetic and analytical, Russell describes the essential contract that we must follow if we are to survive our ancient urge to destroy, one that enjoins us to create and imagine with care—and tact."—Hilton Als, winner of the Pulitzer Prize for Criticism

"Russell's impressive book is a beautifully written meditation on the interrelation of the essay form and the concept and practice of tact in British culture, beginning with the romantic era and extending up through the postwar period. Tact is a true pleasure to read and will appeal to specialists and nonspecialists alike."—Amanda Anderson, author of The Way We Argue Now: A Study in the Cultures of Theory

"Ambitious and groundbreaking, Tact offers a fresh approach to a too little studied nineteenth-century genre. Russell presents the essay as a form that wants to teach us how and when to handle concepts, things, and people—and how and when to keep our hands to ourselves. In the process, he shows how Victorian nonfiction prose anticipates some of the twentieth century's most innovative theories of psyche and society."—David Kurnick, author of Empty Houses: Theatrical Failure and the Novel