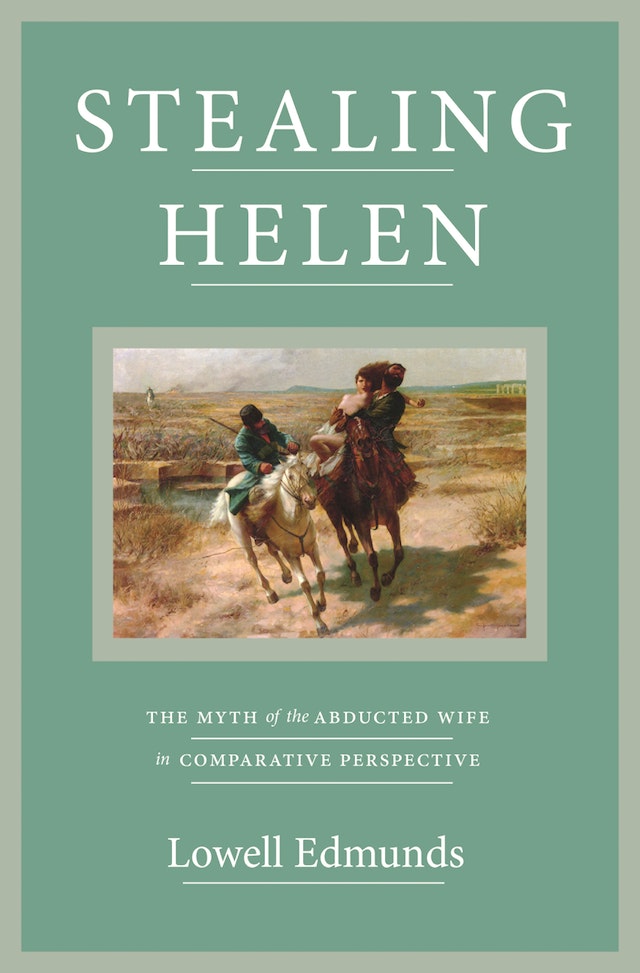 It’s a familiar story: a beautiful woman is abducted and her husband journeys to recover her. This story’s best-known incarnation is also a central Greek myth—the abduction of Helen that led to the Trojan War. Stealing Helen surveys a vast range of folktales and texts exhibiting the story pattern of the abducted beautiful wife and makes a detailed comparison with the Helen of Troy myth. Lowell Edmunds shows that certain Sanskrit, Welsh, and Old Irish texts suggest there was an Indo-European story of the abducted wife before the Helen myth of the Iliad became known.

Investigating Helen’s status in ancient Greek sources, Edmunds argues that if Helen was just one trope of the abducted wife, the quest for Helen’s origin in Spartan cult can be abandoned, as can the quest for an Indo-European goddess who grew into the Helen myth. He explains that Helen was not a divine essence but a narrative figure that could replicate itself as needed, at various times or places in ancient Greece. Edmunds recovers some of these narrative Helens, such as those of the Pythagoreans and of Simon Magus, which then inspired the Helens of the Faust legend and Goethe.

Stealing Helen offers a detailed critique of prevailing views behind the “real” Helen and presents an eye-opening exploration of the many sources for this international mythical and literary icon.

Lowell Edmunds is professor emeritus of classics at Rutgers University. He is the author of Oedipus: The Ancient Legend and Its Later Analogues and the editor of Approaches to Greek Myth.

"Ultimately, the book's greatest merit may lie . . . in his [Edmunds'] broad horizons—in his delight at discovering similarities between classical literature and the tales and experiences of people across the globe."—Barbara Graziosi, Times Higher Education

"Edmunds brings to this rich, sophisticated book an innovative approach to the Helen story: he looks at it with a comparative eye."—Choice

"An excellent, important book in both its methodology and data. . . . Edmunds has brought about a leap of quality in understanding the myth of Helen."—Ephraim Nissan, Fabula

"A weighty contribution to the study of Helen as well as the study of folklore in ancient Greece."—Ryan Platte, Journal of Hellenic Studies

"This book is a masterpiece. Demonstrating that Helen of Troy is part of an international story type, Edmunds completely reexamines how one should study traditional narrative, notions of fiction, and the relations between myth and cult. This book is a condensed and compelling initiation into what shapes stories and our reading of them. It is going to become a classic in its own right."—Richard P. Martin, author of Myths of the Ancient Greeks

"Clearly the work of many years and much reflection, Stealing Helen is an impressive and wide-ranging book from a well-known and innovative scholar. Treating the central topic of Helen from multiple points of view drawn from many disciplines, this invigorating book will interest not only classicists but also anyone interested in the history and construction of narrative traditions."—Stephanie W. Jamison, University of California, Los Angeles

"A work of meticulous and extensive scholarship, Stealing Helen brings folkloric techniques into the mainstream classical study of myth. Edmunds's erudition is remarkable and spans a vast range of classical and folkloric sources."—John Colarusso, McMaster University