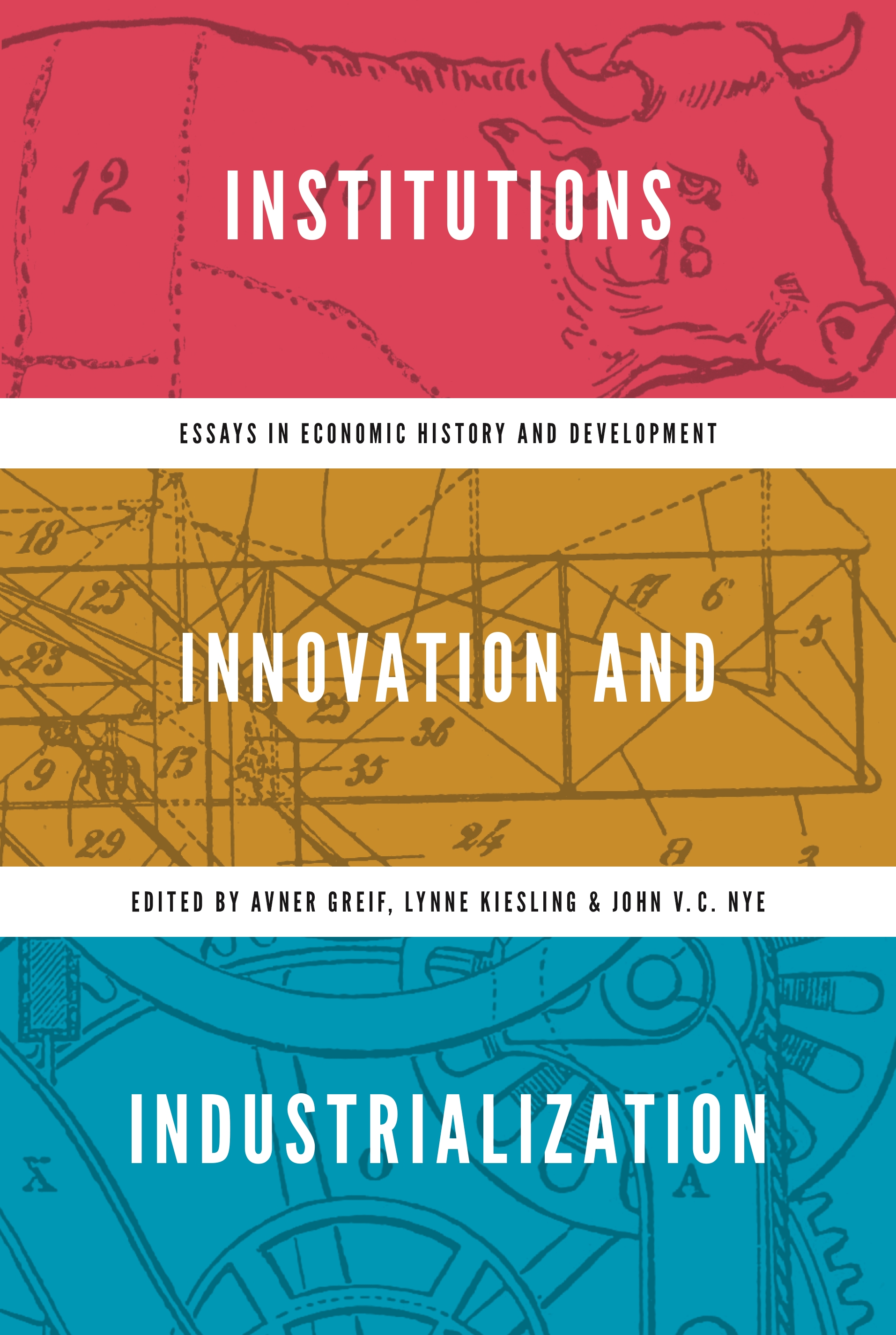 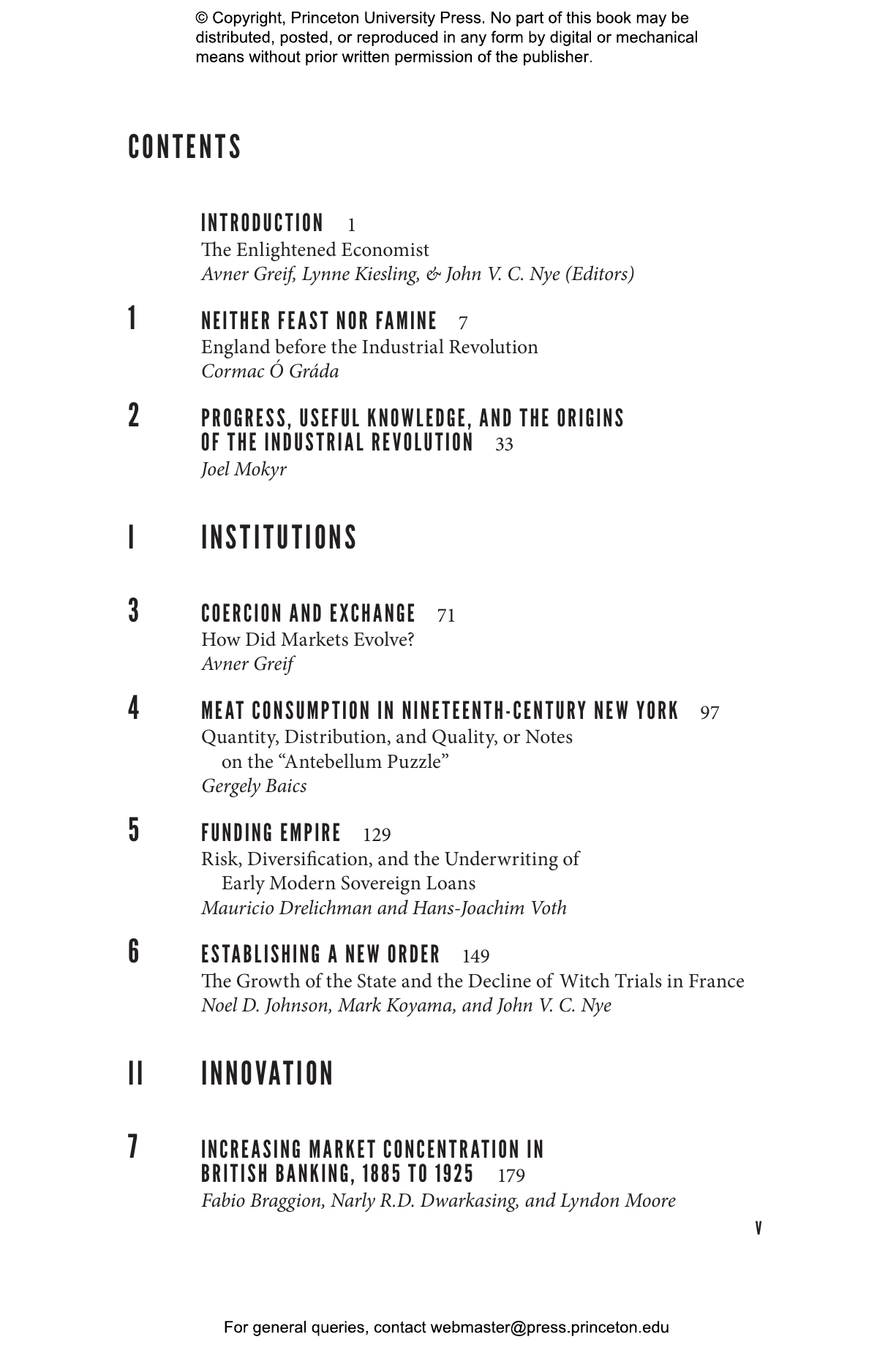 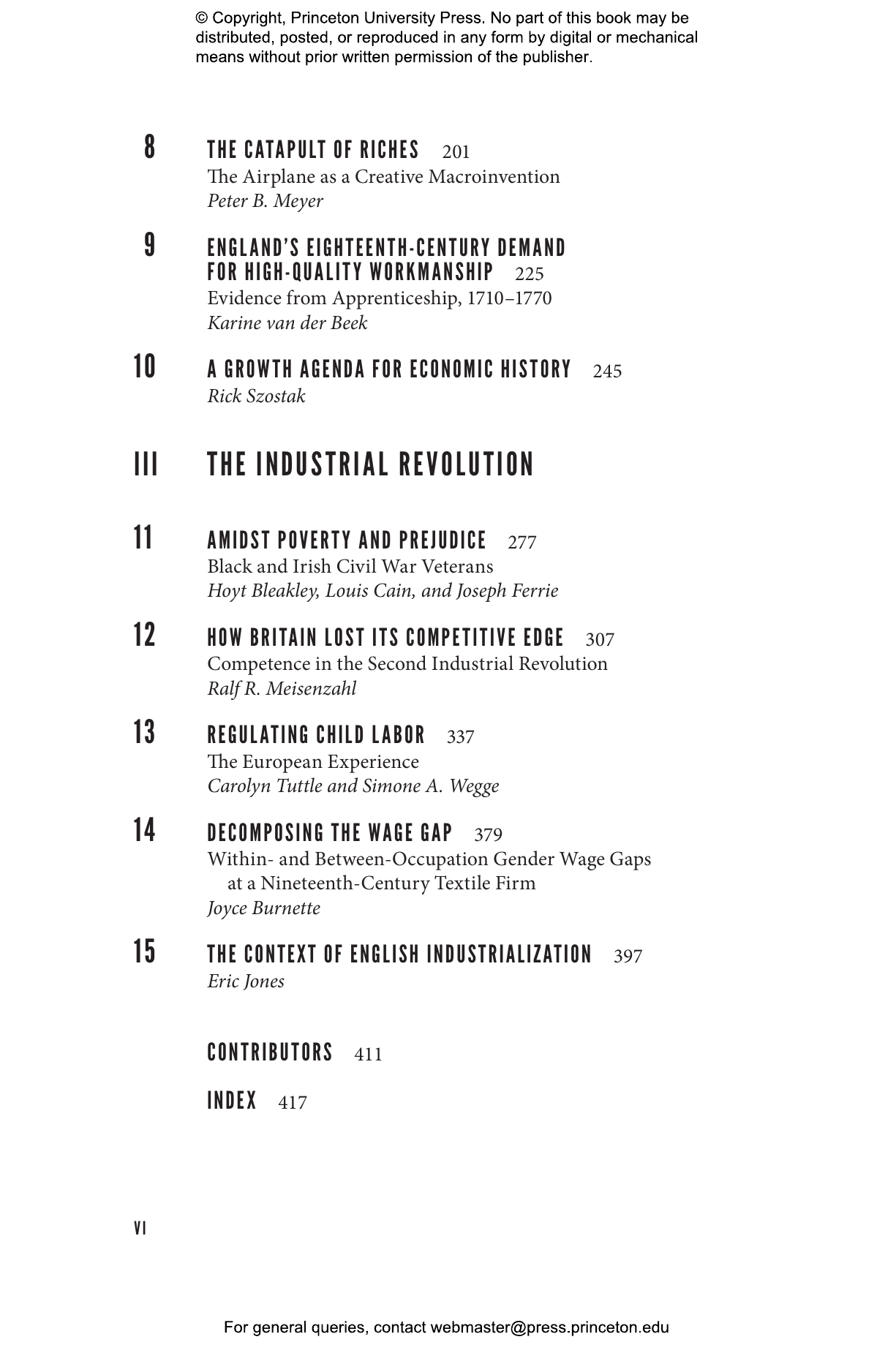 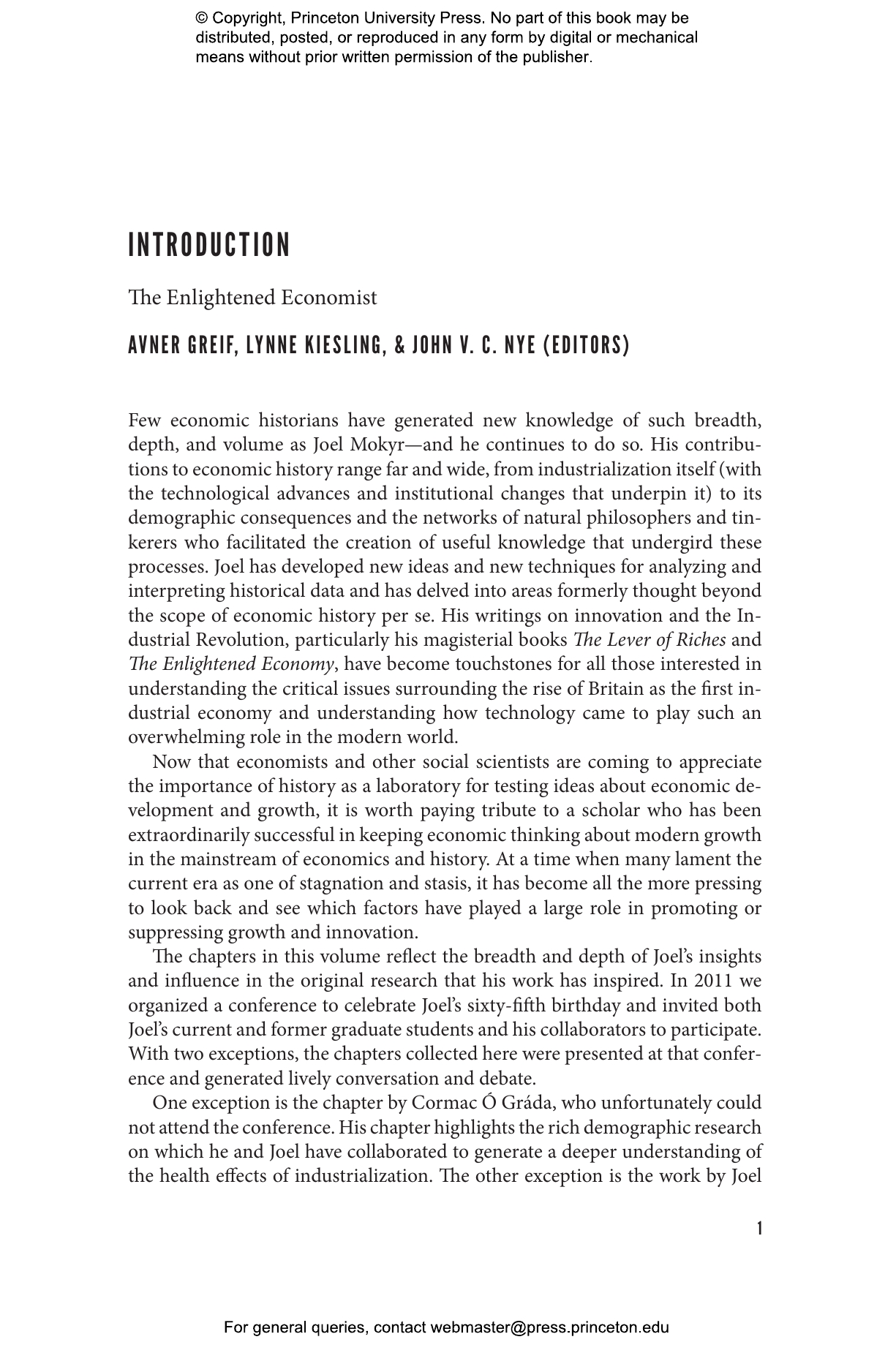 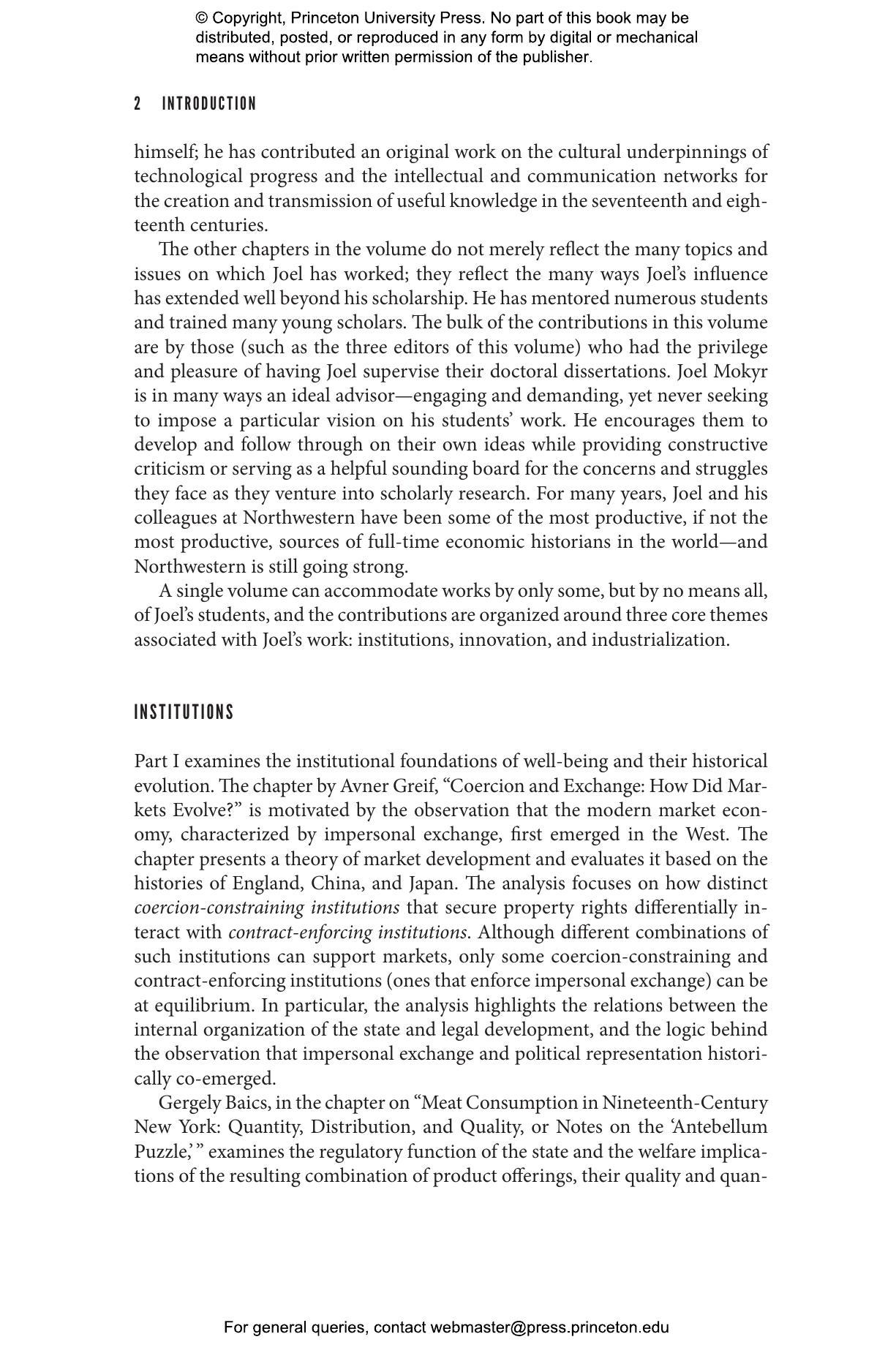 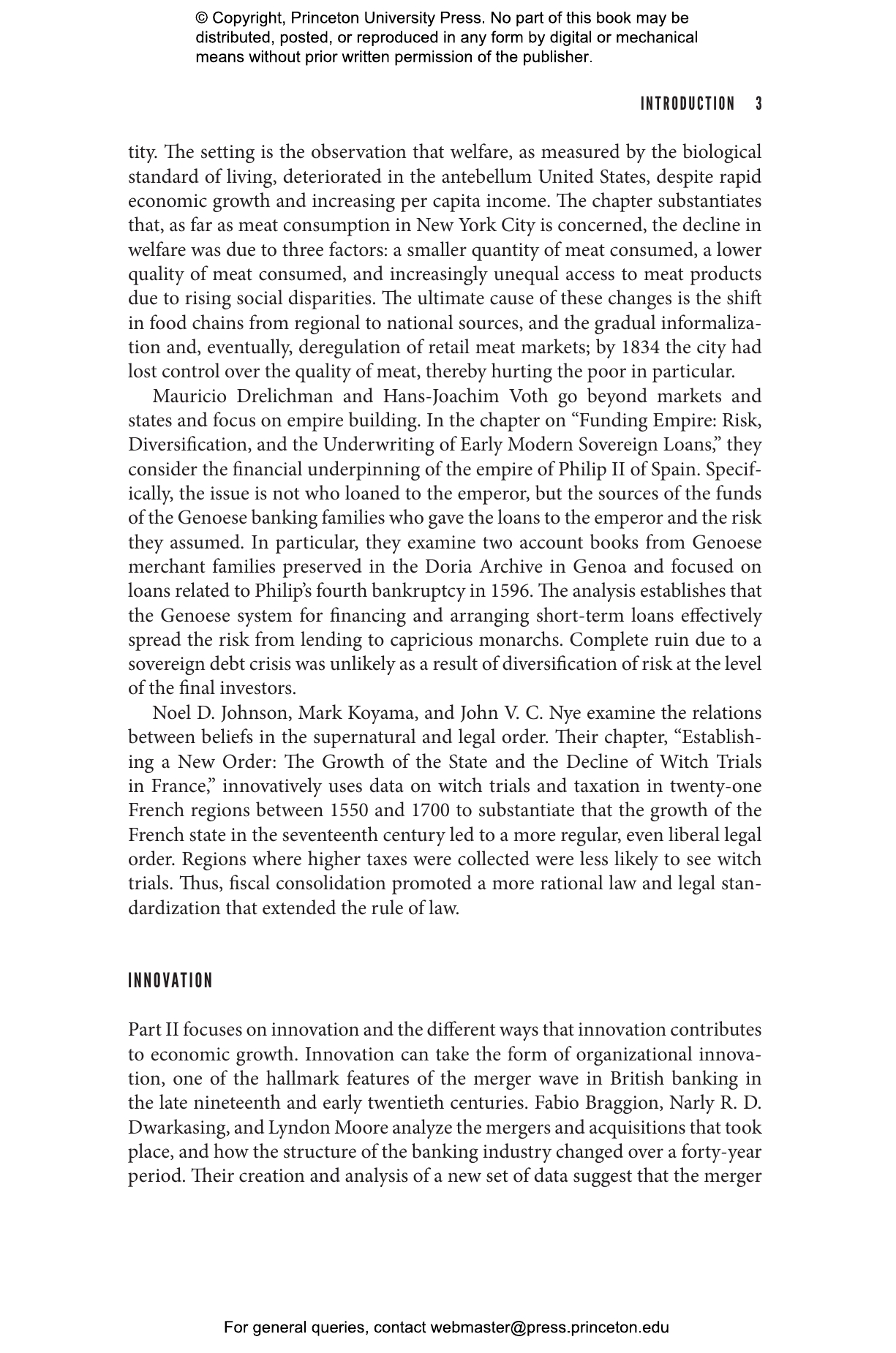 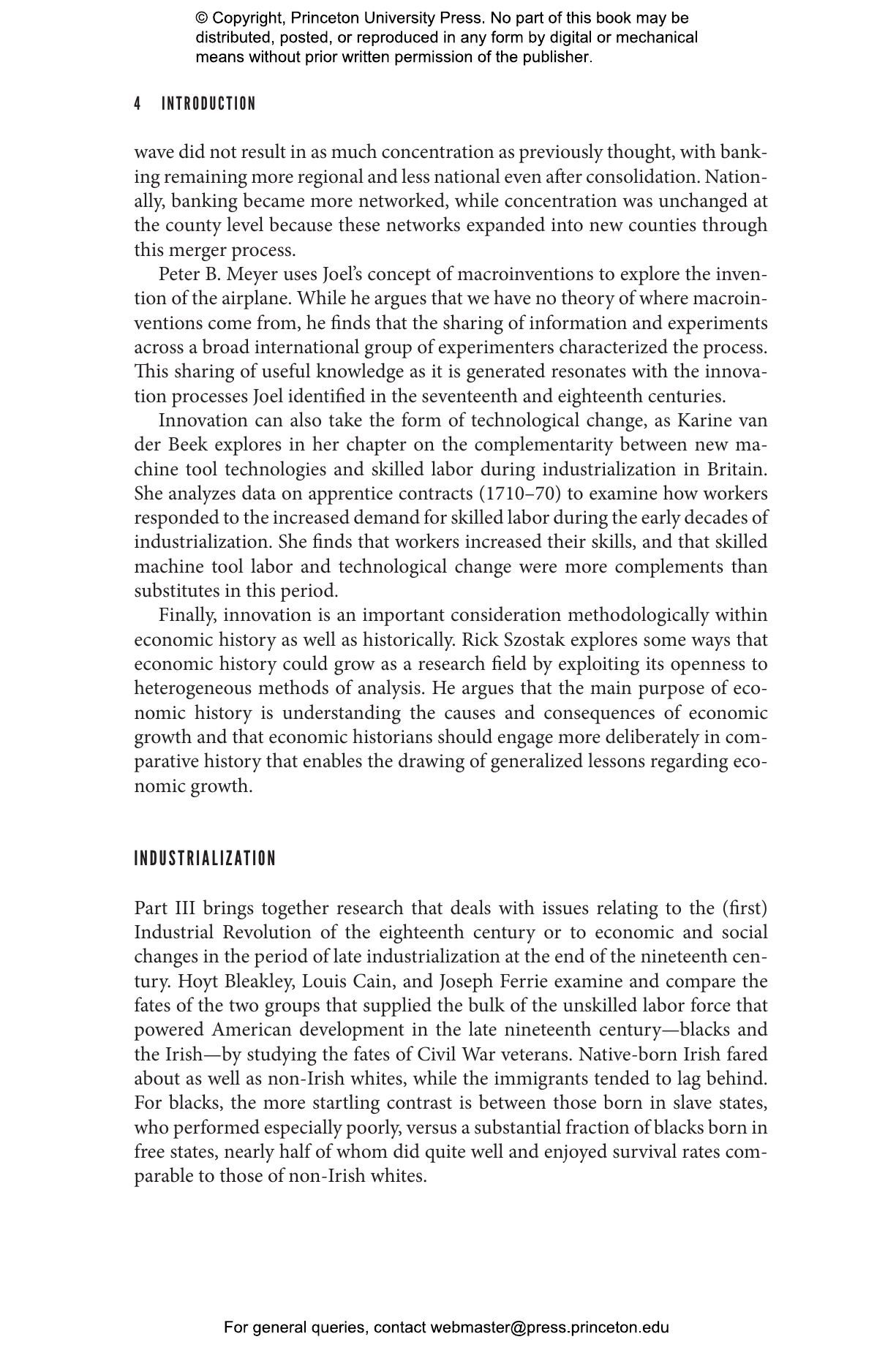 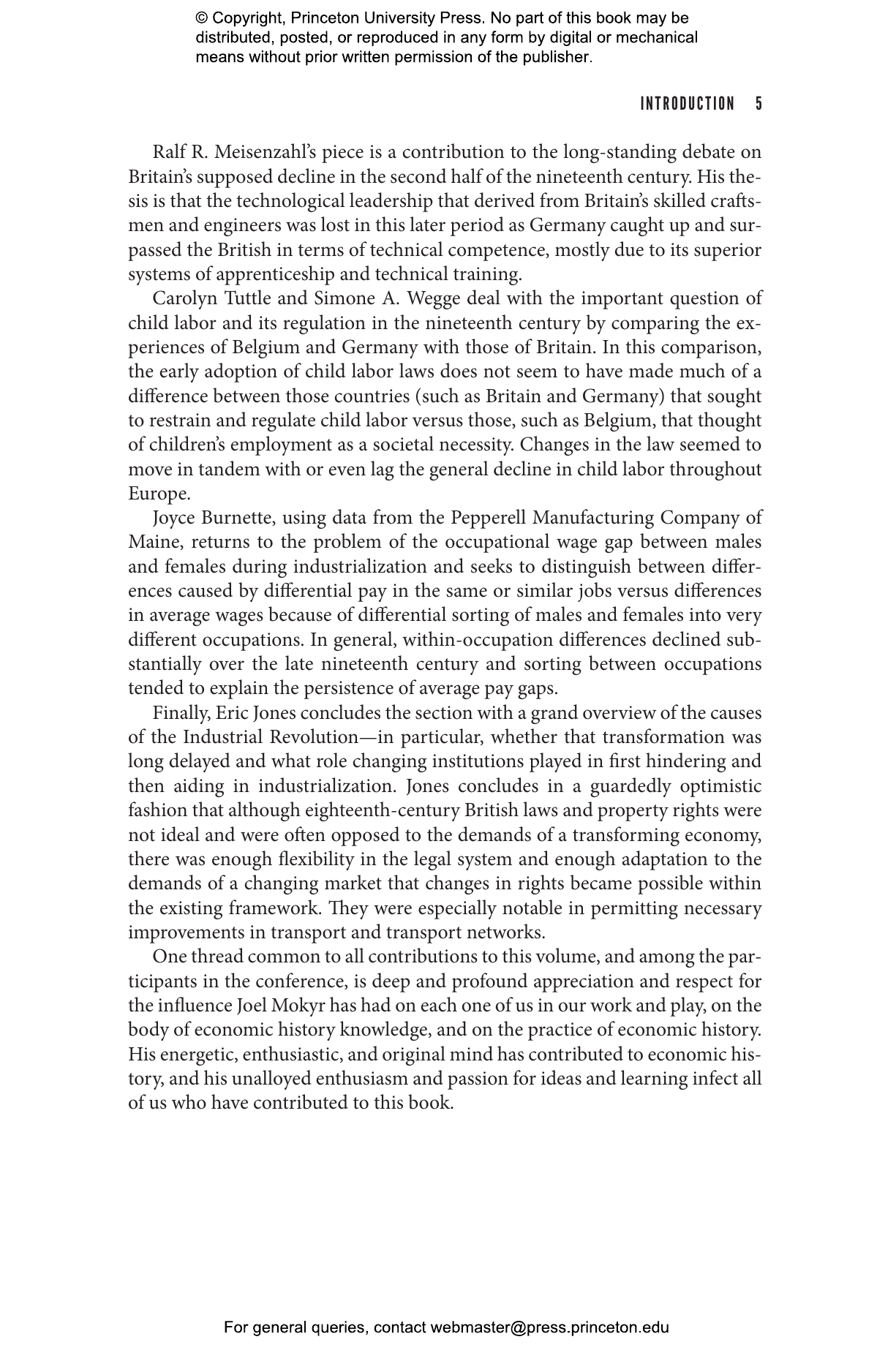 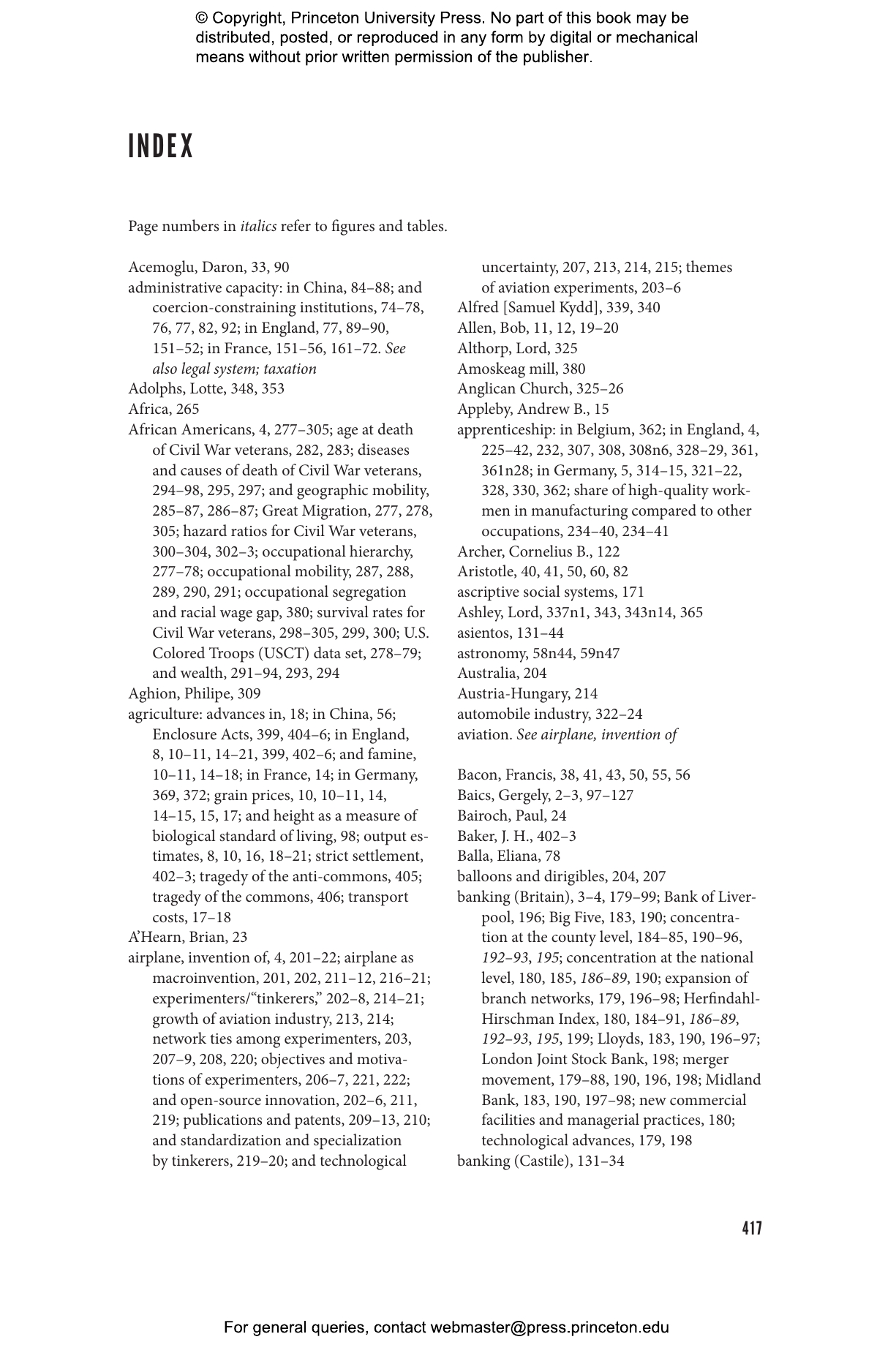 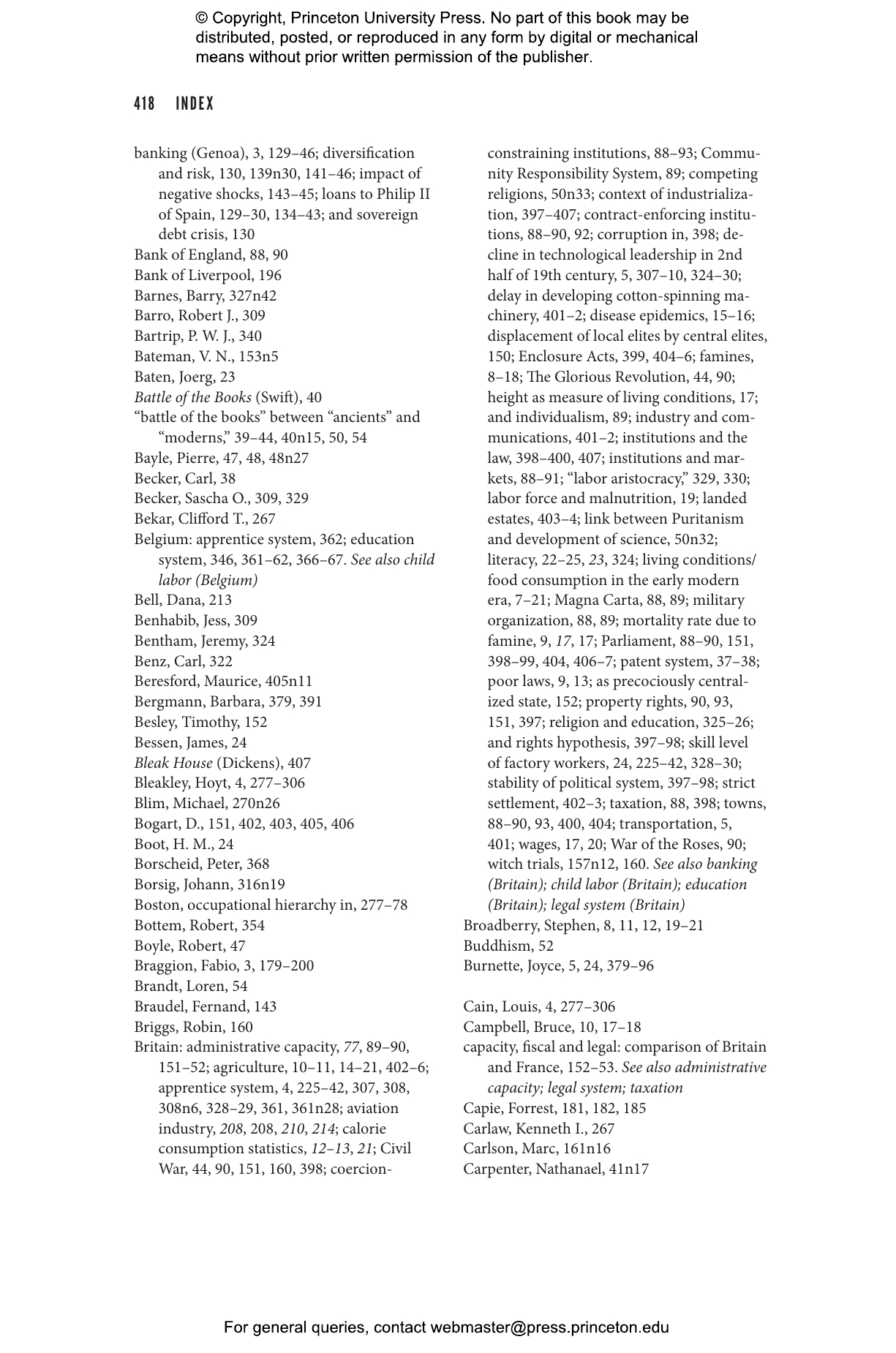 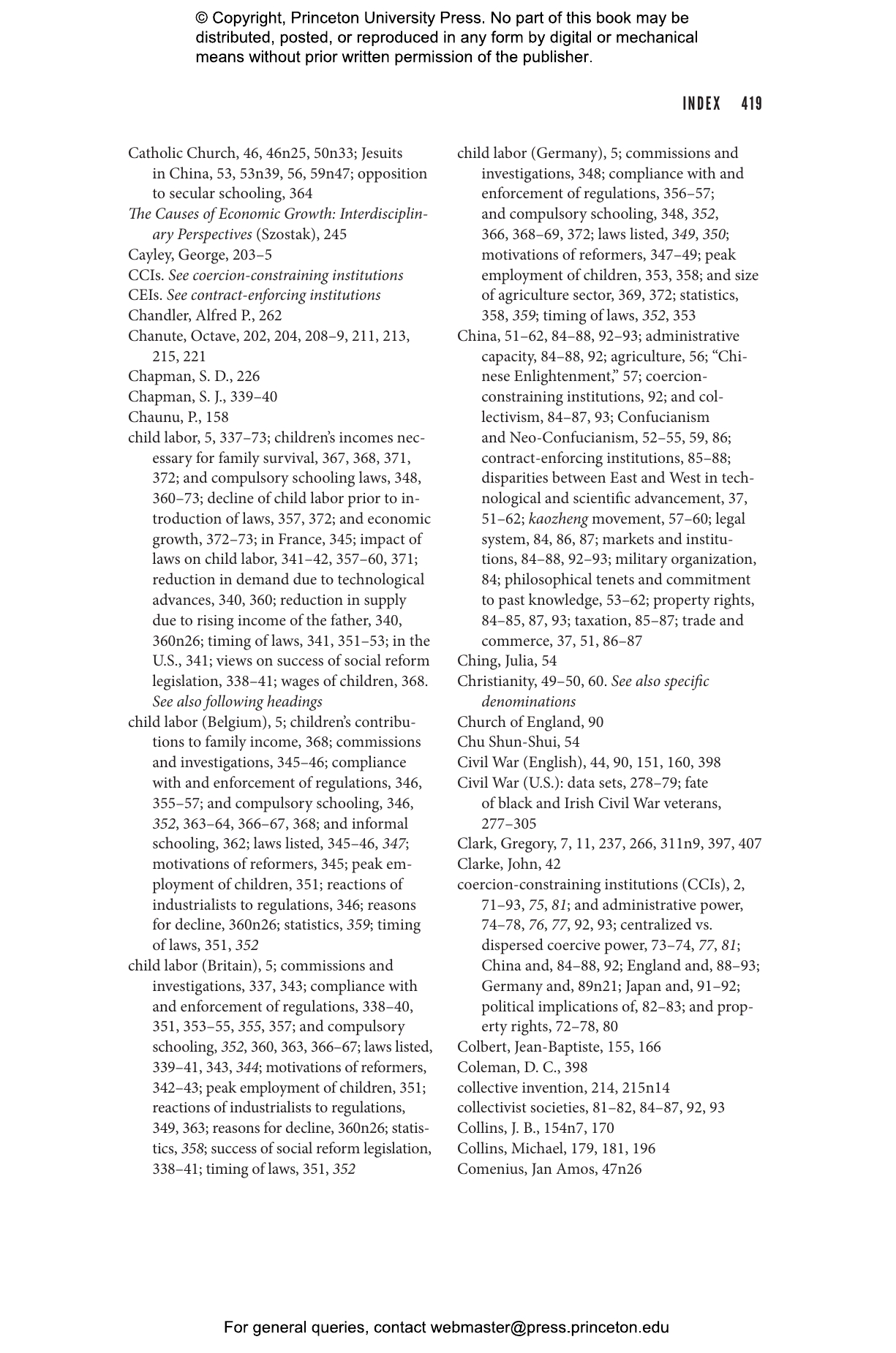 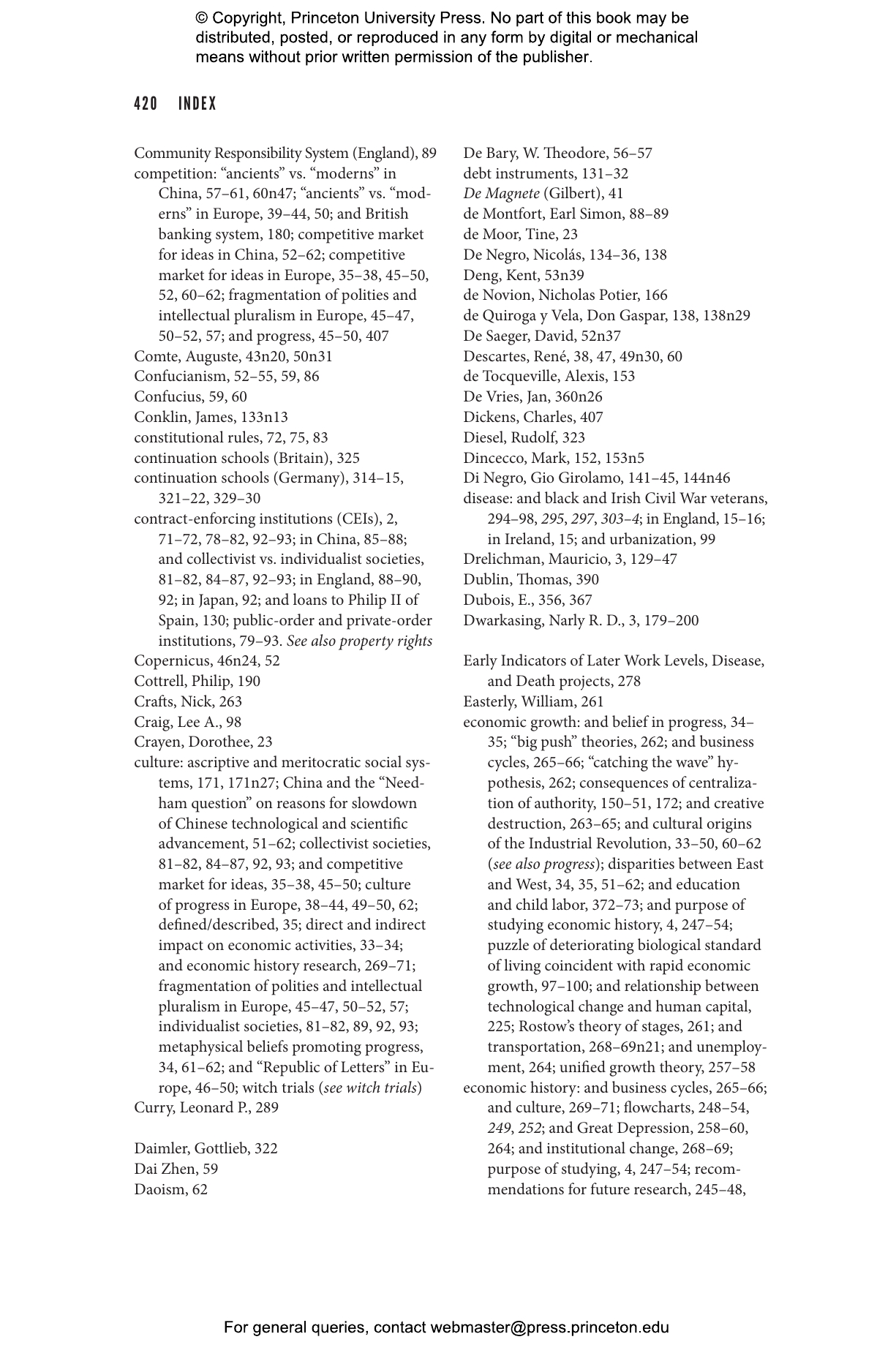 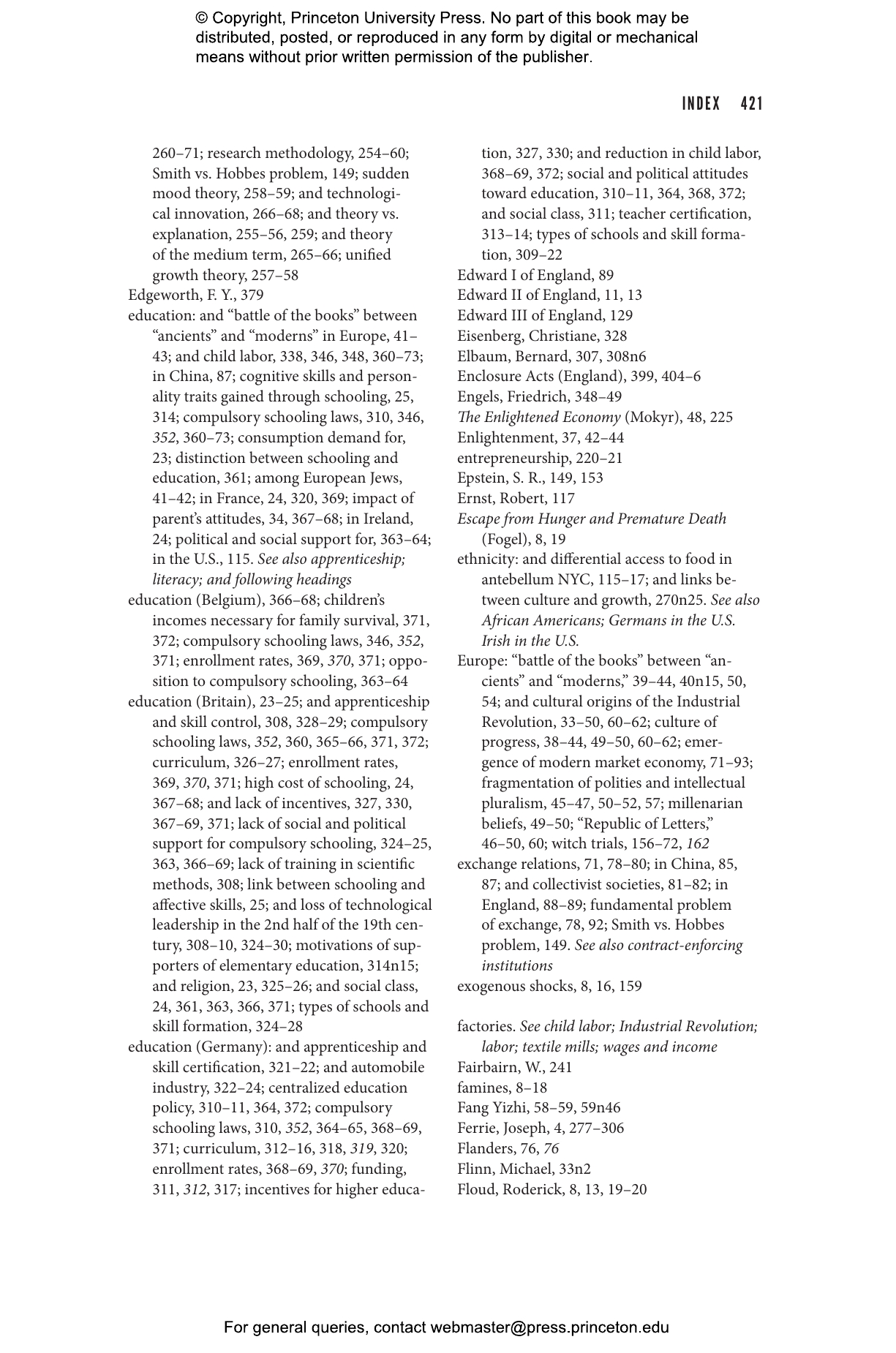 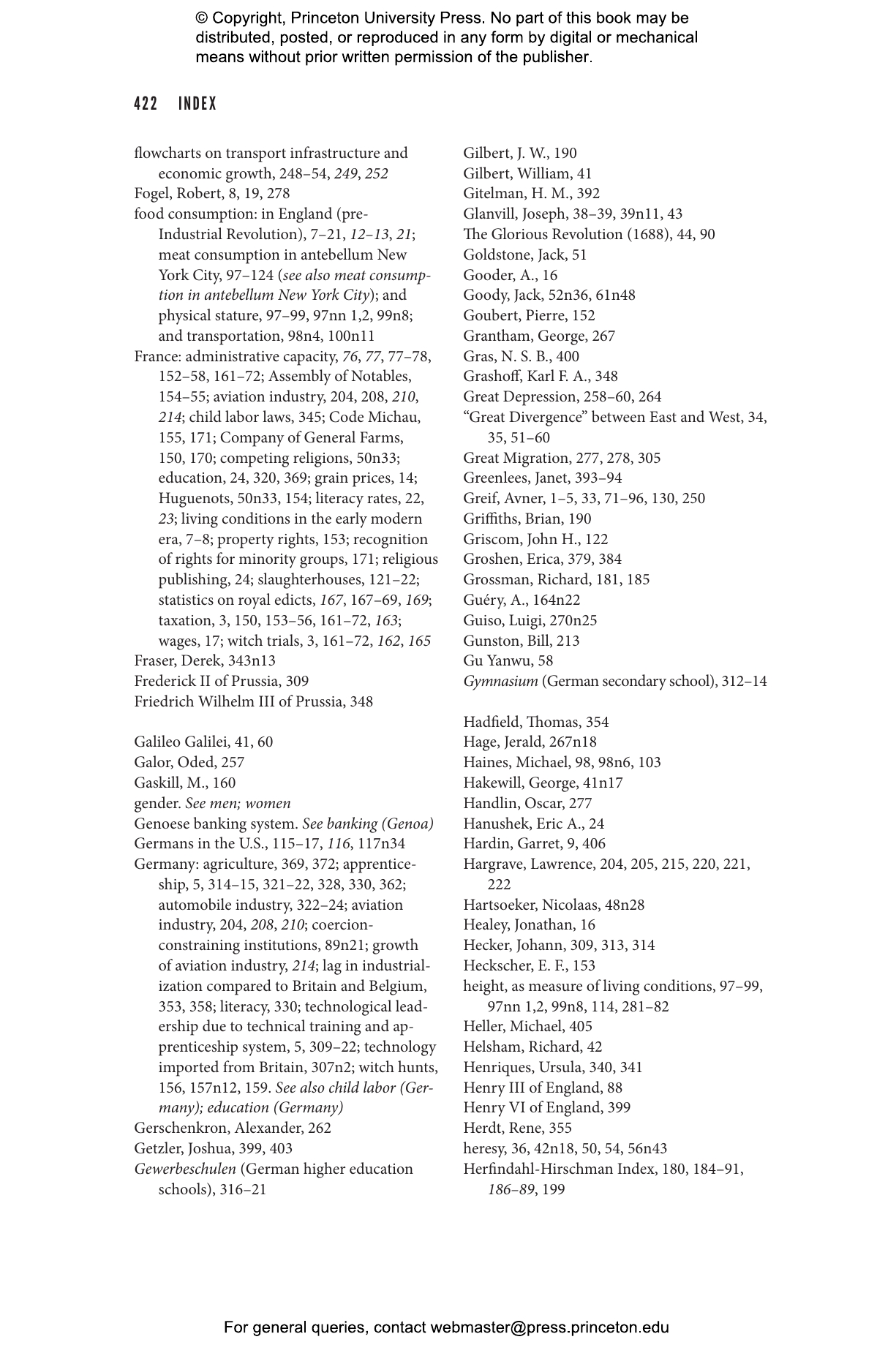 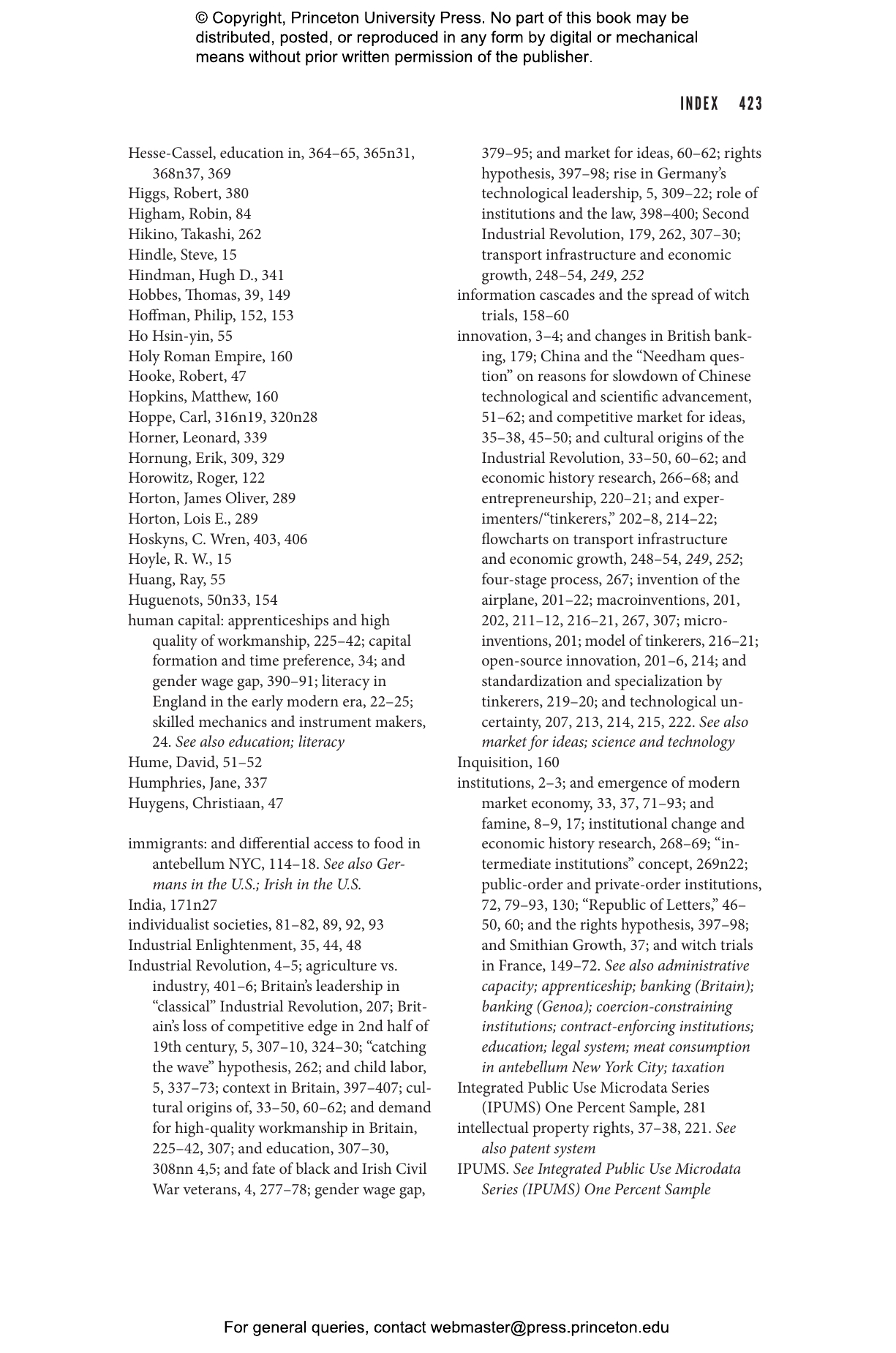 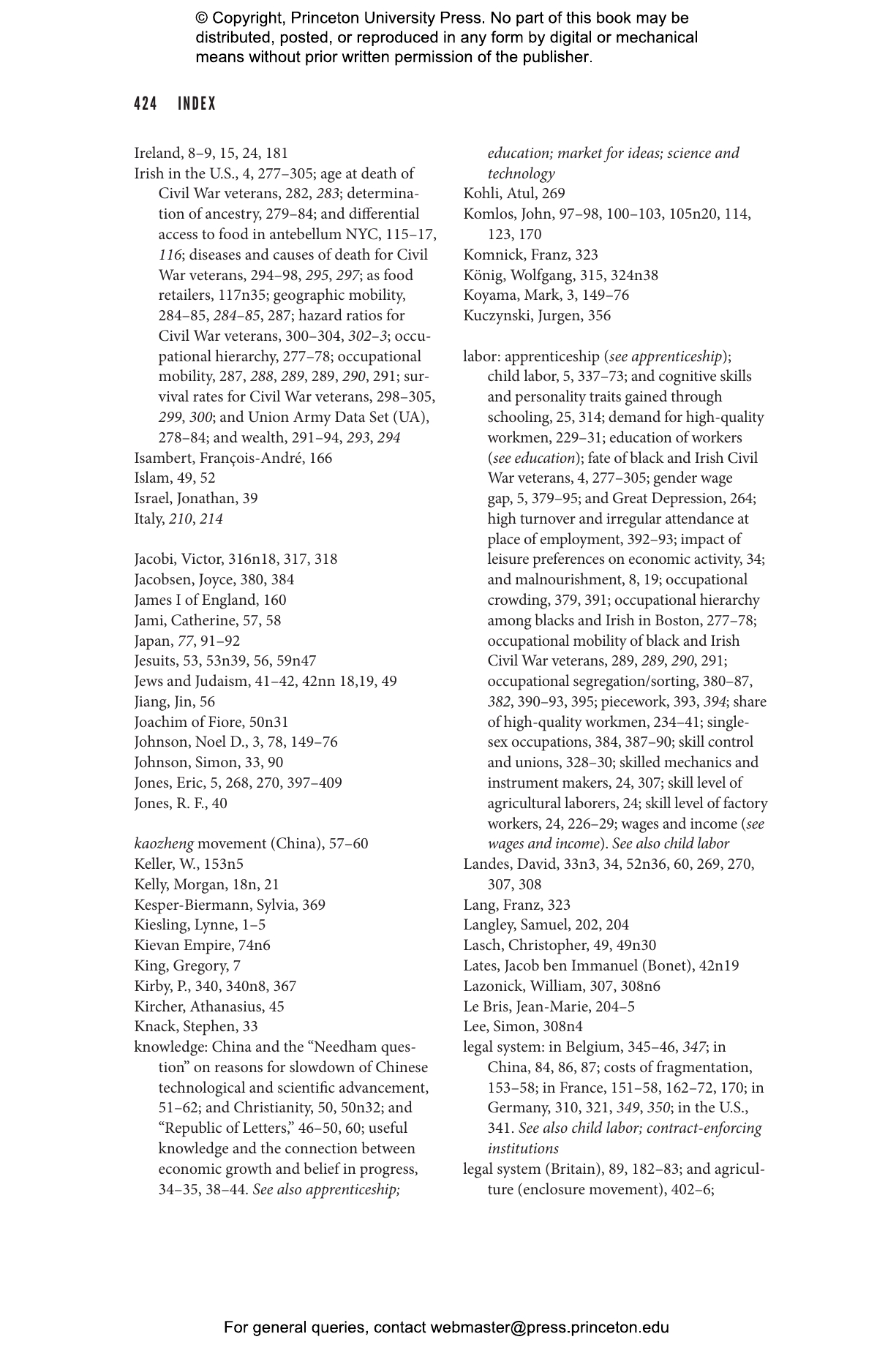 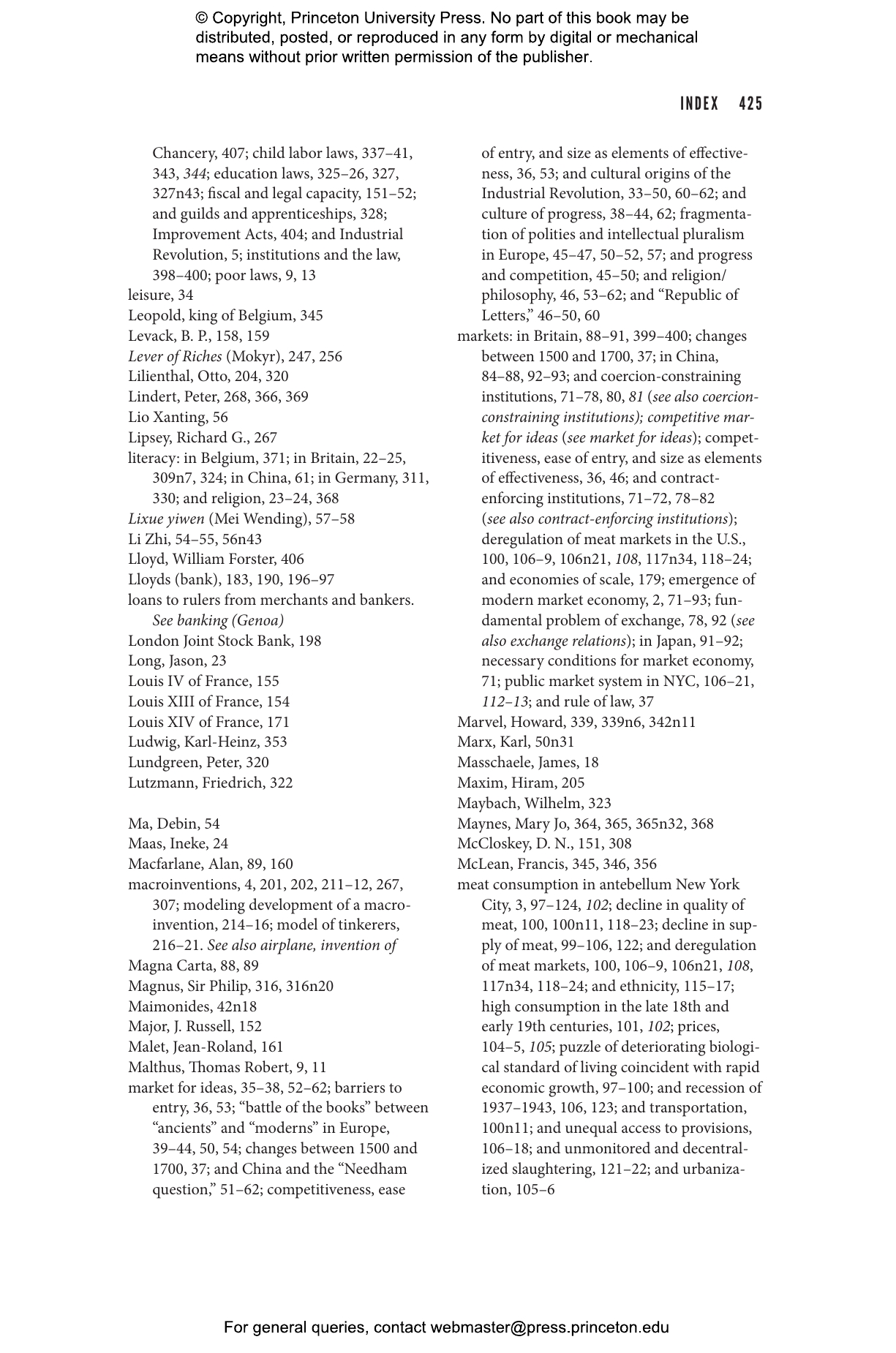 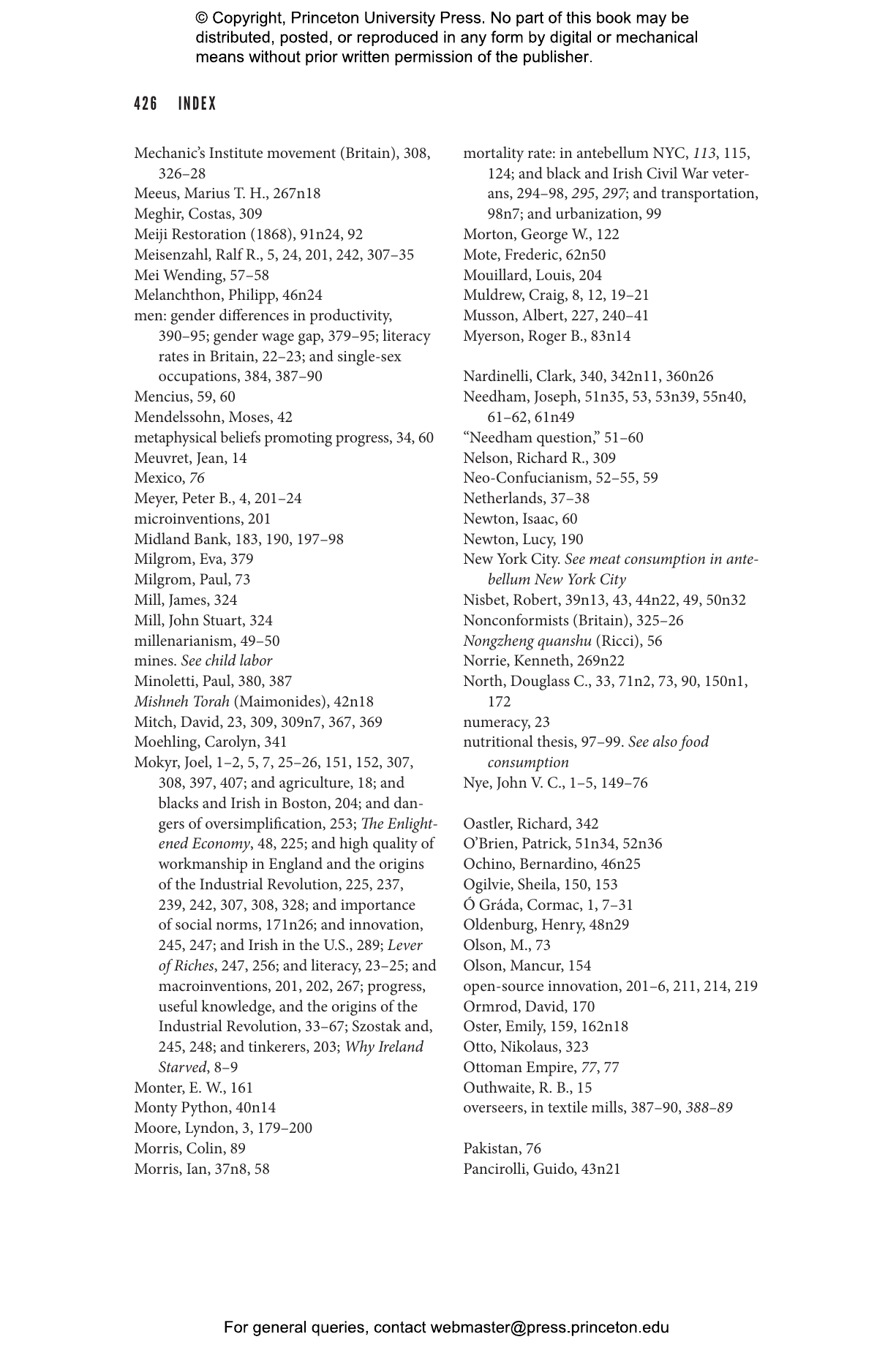 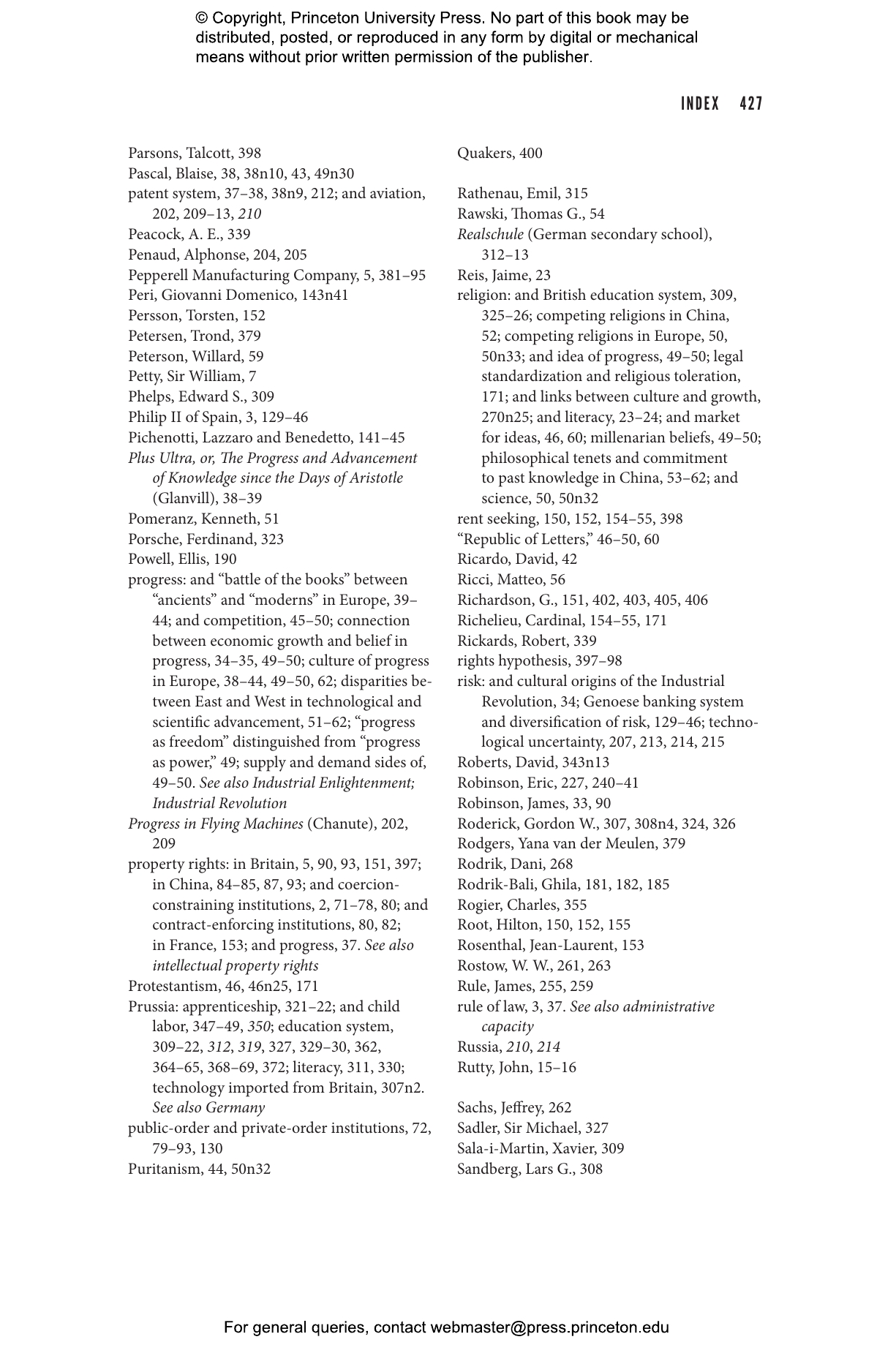 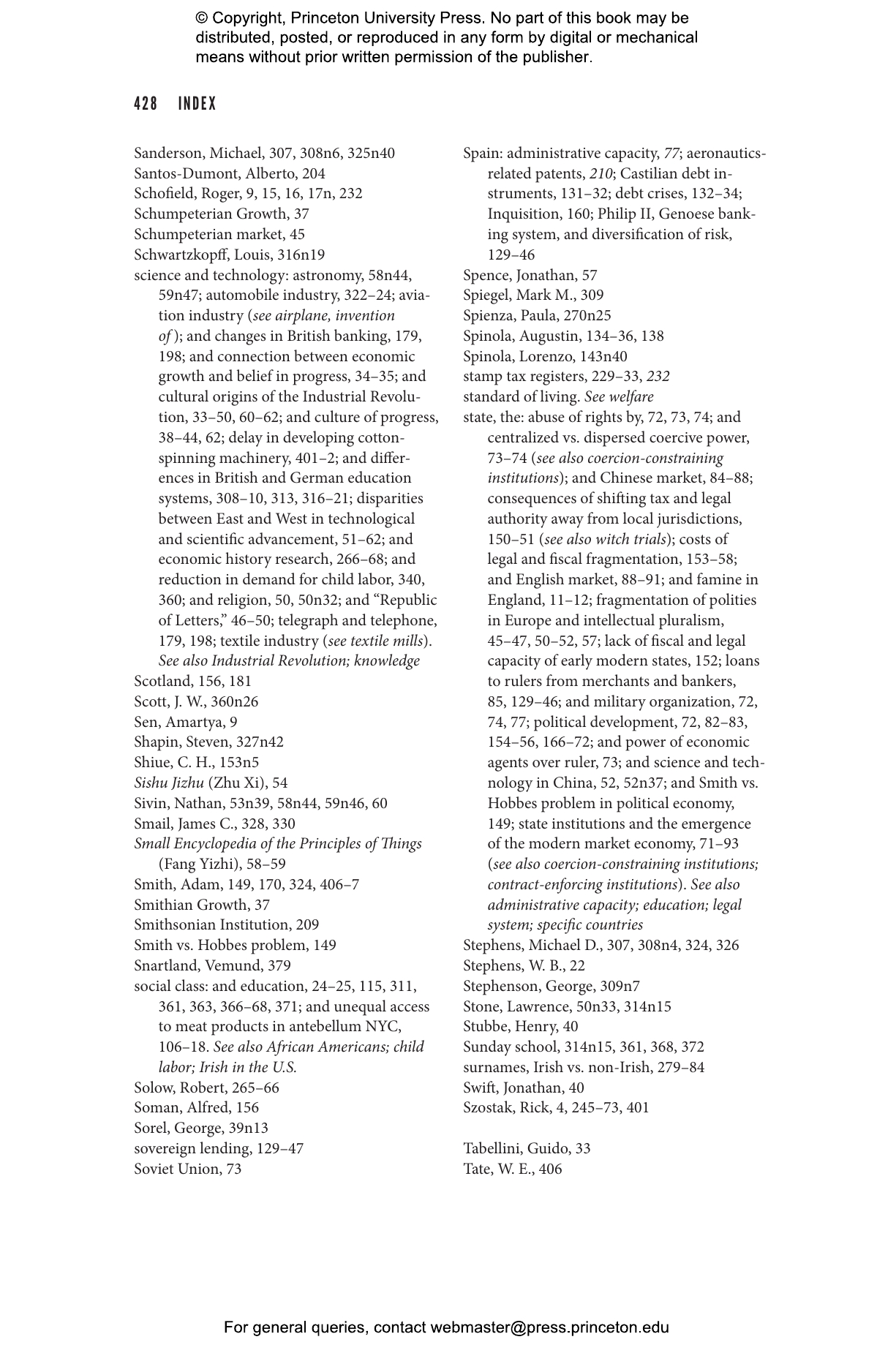 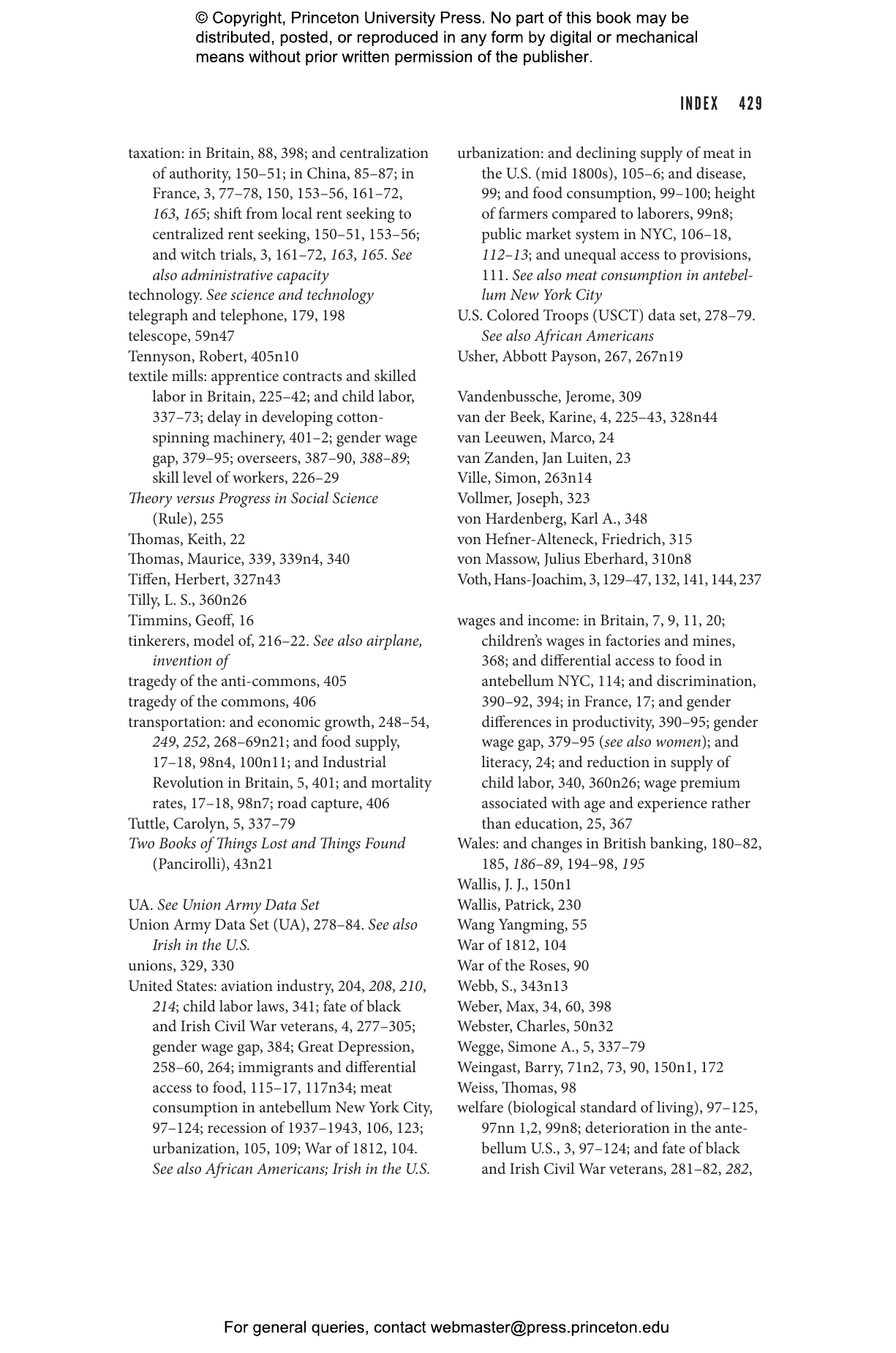 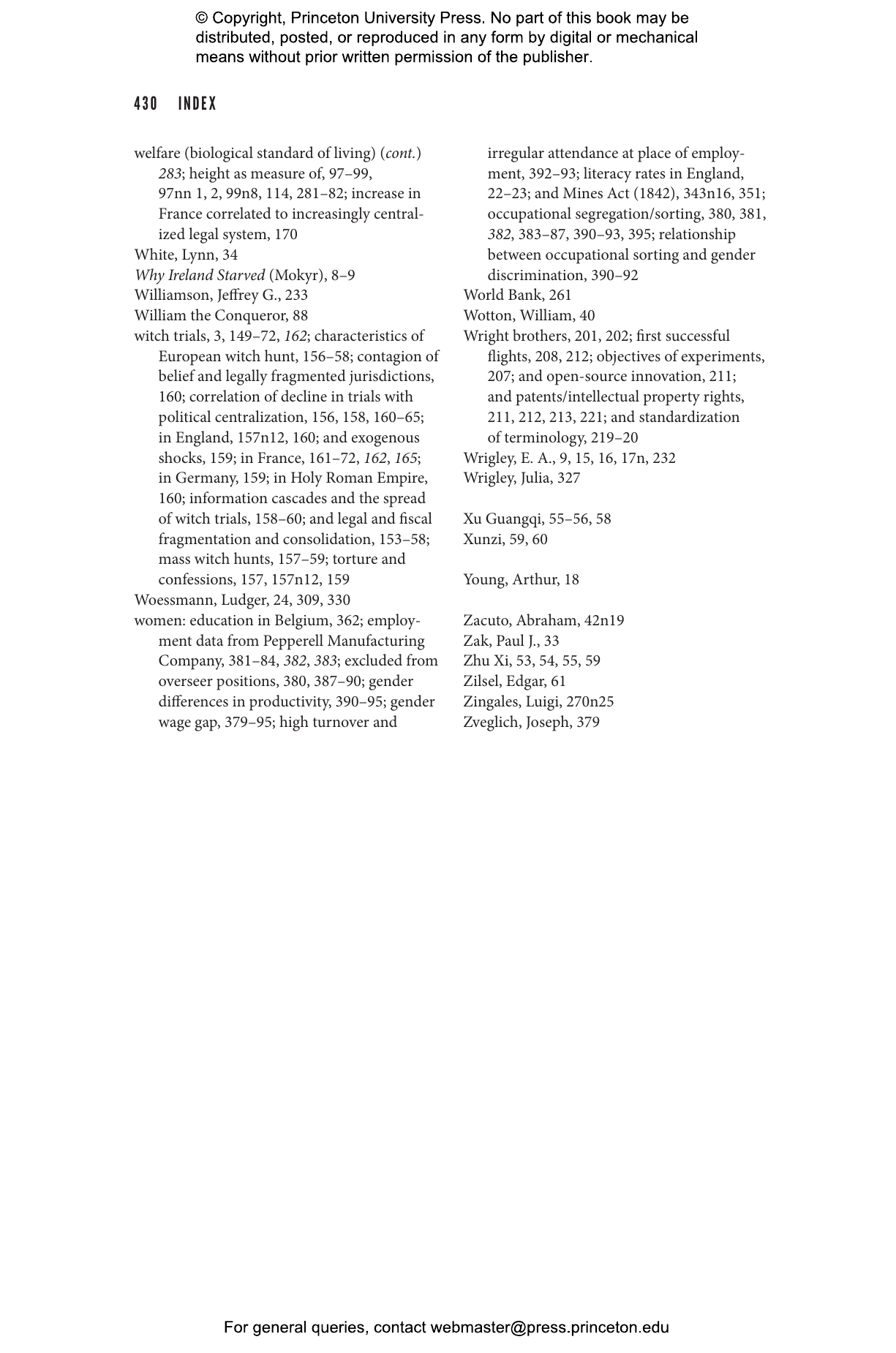 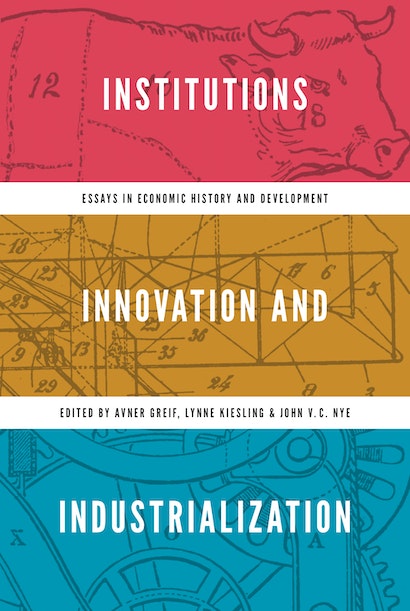 This book brings together a group of leading economic historians to examine how institutions, innovation, and industrialization have determined the development of nations. Presented in honor of Joel Mokyr—arguably the preeminent economic historian of his generation—these wide-ranging essays address a host of core economic questions. What are the origins of markets? How do governments shape our economic fortunes? What role has entrepreneurship played in the rise and success of capitalism? Tackling these and other issues, the book looks at coercion and exchange in the markets of twelfth-century China, sovereign debt in the age of Philip II of Spain, the regulation of child labor in nineteenth-century Europe, meat provisioning in pre–Civil War New York, aircraft manufacturing before World War I, and more. The book also features an essay that surveys Mokyr’s important contributions to the field of economic history, and an essay by Mokyr himself on the origins of the Industrial Revolution.

"These essays demonstrate the breadth of institutionalist economic history, covering the interaction of institutions, culture, markets, and politics in shaping economic behavior and outcomes."—Choice

"The origins of modern economic growth have been a central preoccupation of economic historians since, well, there has been modern economic growth. As this volume edited by Greif, Kiesling, and Nye makes clear, that preoccupation is very much alive, and scholarship on the subject is alive and well. For readers interested in understanding the state of the art, there is no better place to start."—Barry Eichengreen, University of California, Berkeley

"Institutions, Innovation, and Industrialization provides a set of pioneering and provocative essays inspired by Joel Mokyr's vision of the integration of history and economics. This book will have an enduring impact and at the same time open up new avenues of investigation at the intersection of institutional economics and careful case-based research."—Stephen H. Haber, Stanford University

"These essays are high-level pieces, based on cutting-edge research, and with a coordinated set of themes concerned with the interaction between ideas, innovation, and institutional change. This book is an important contribution to the literature on growth and innovation."—Harold James, Princeton University