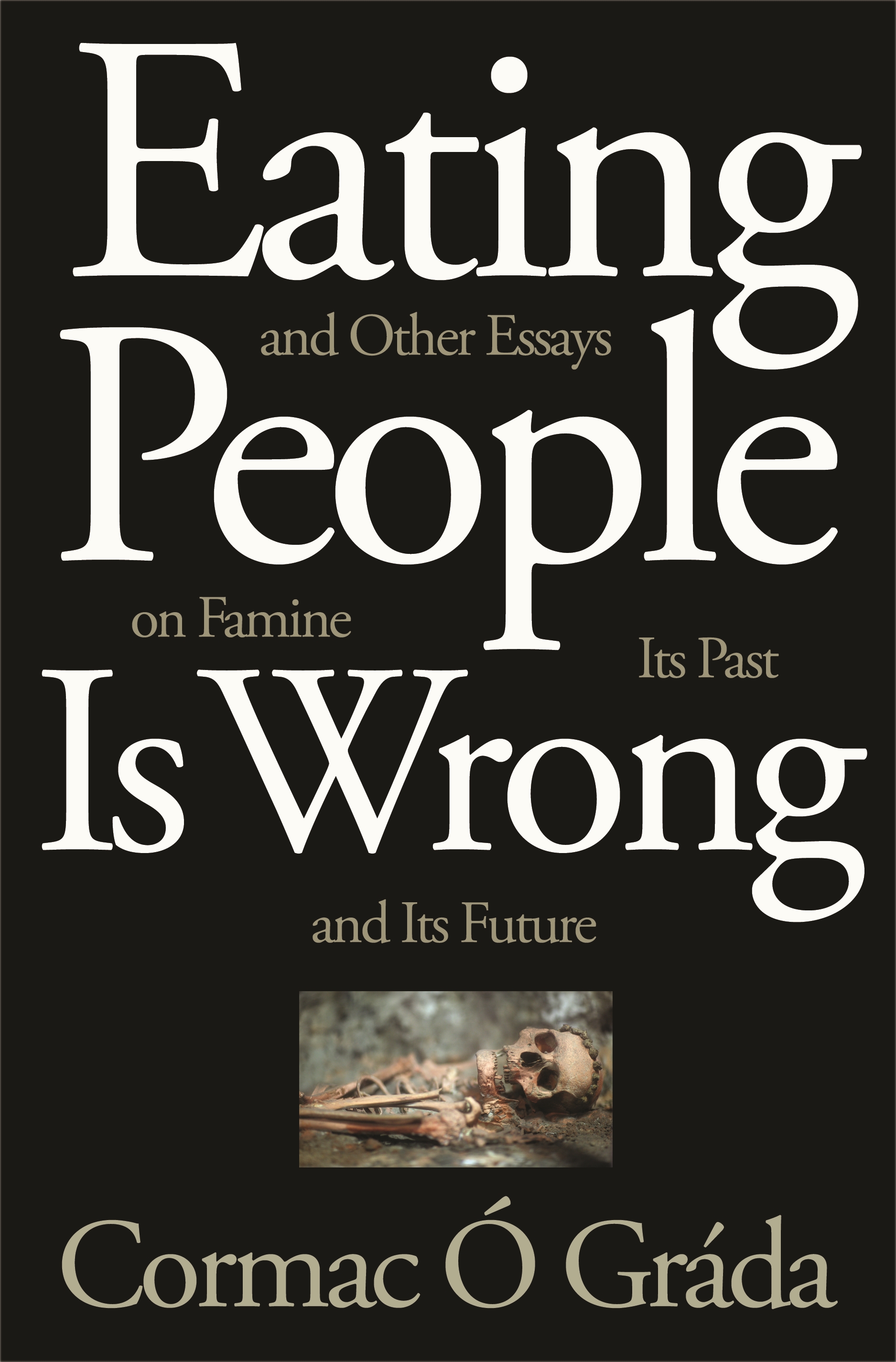 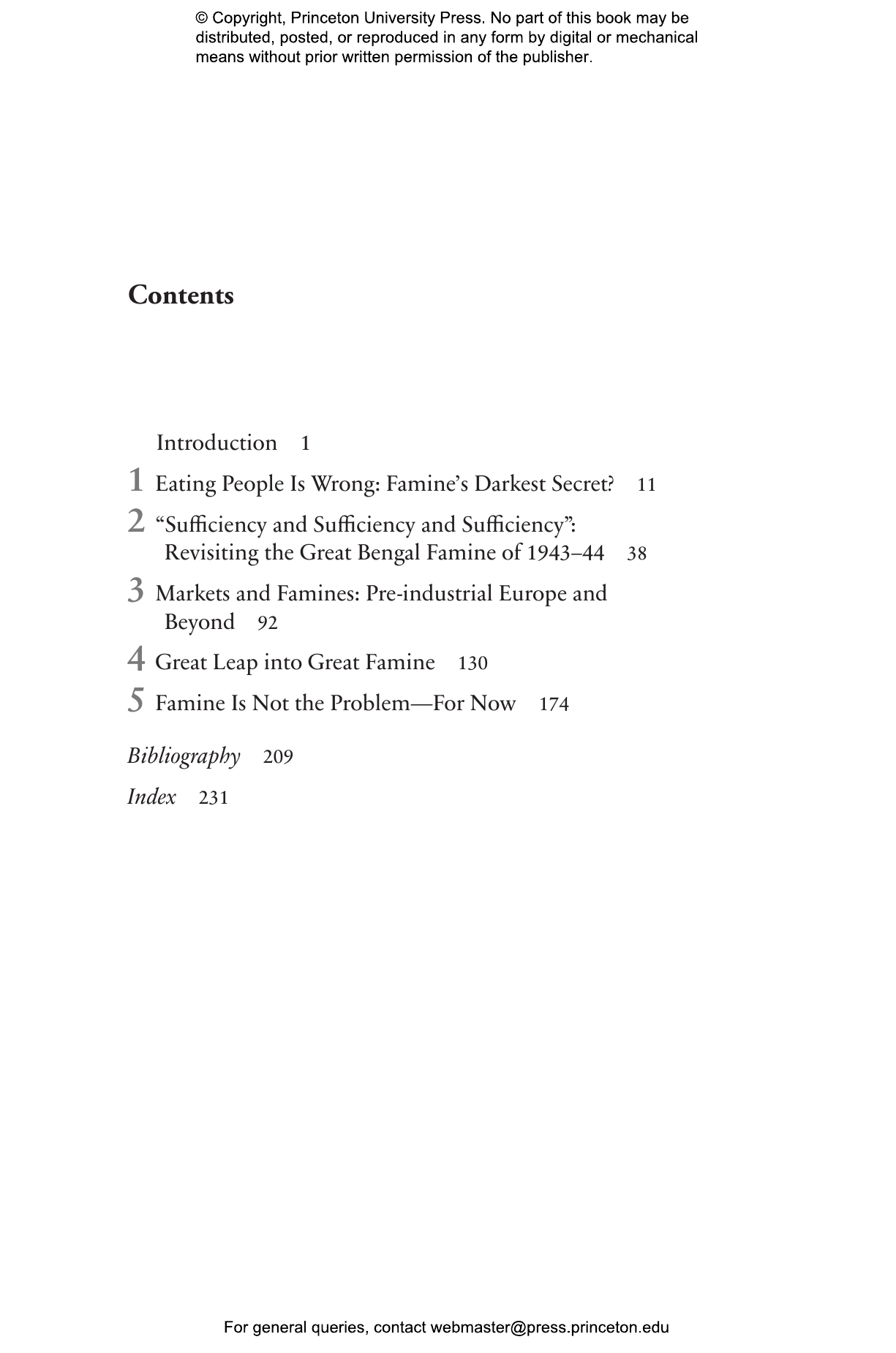 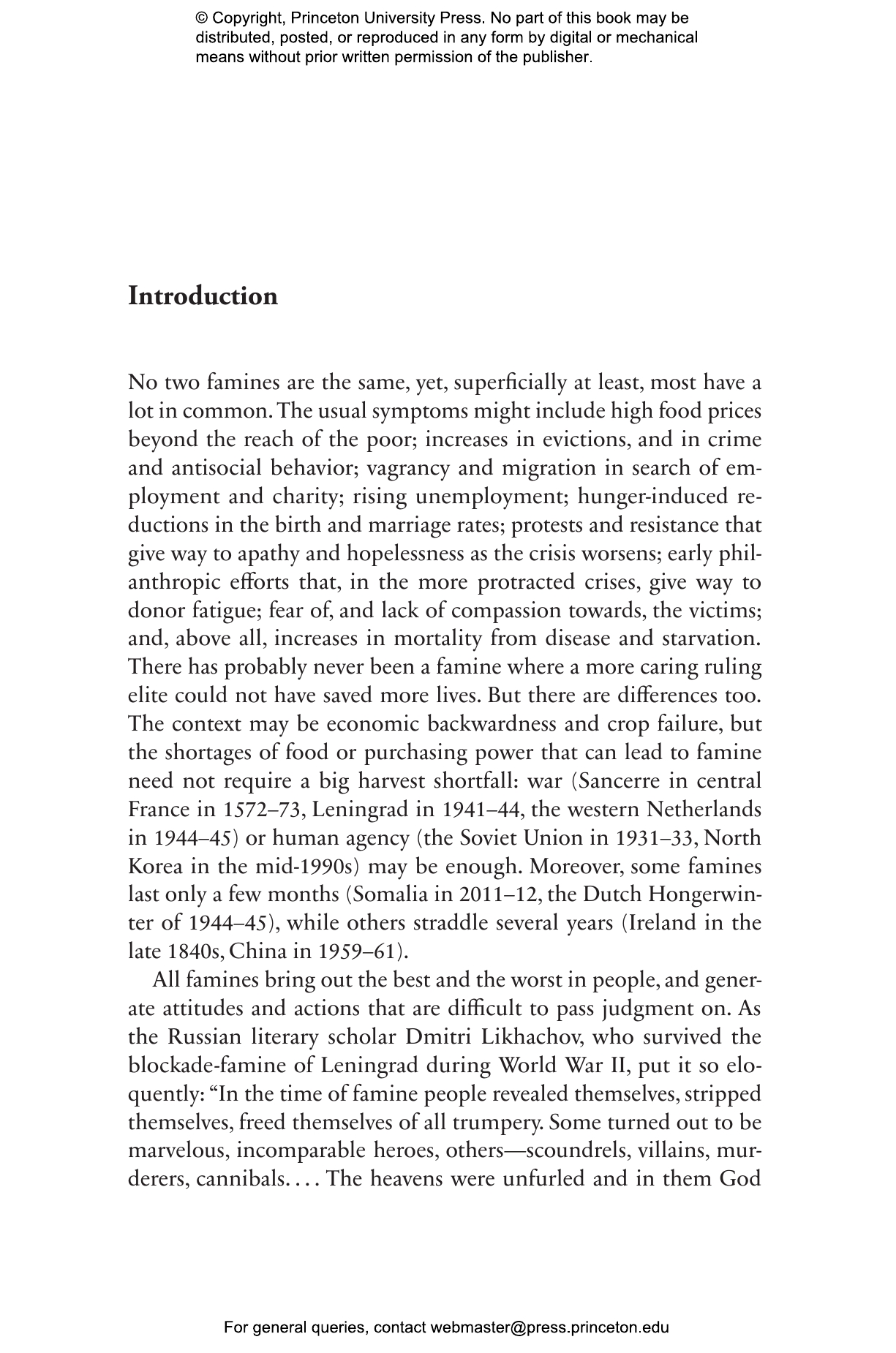 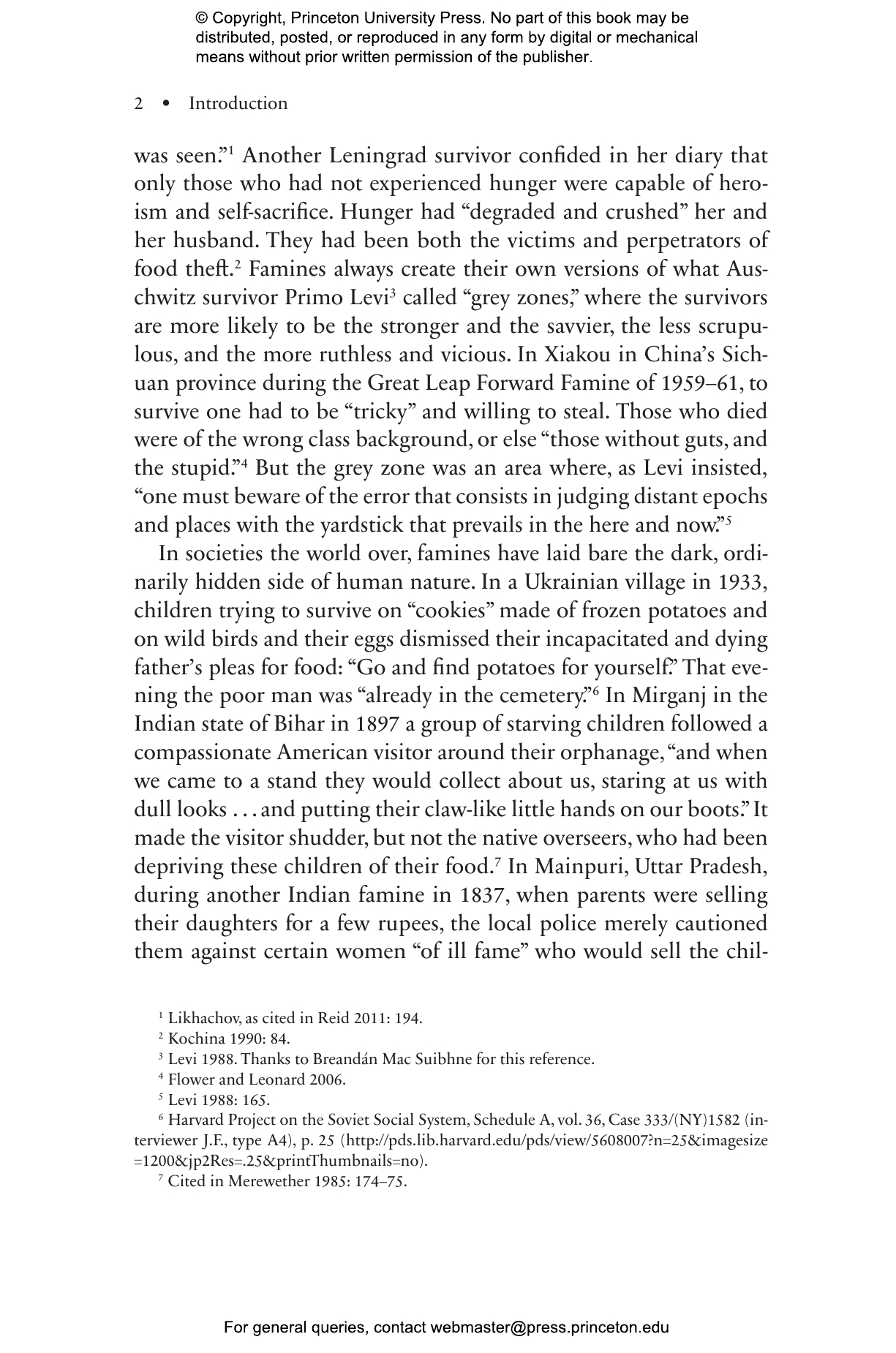 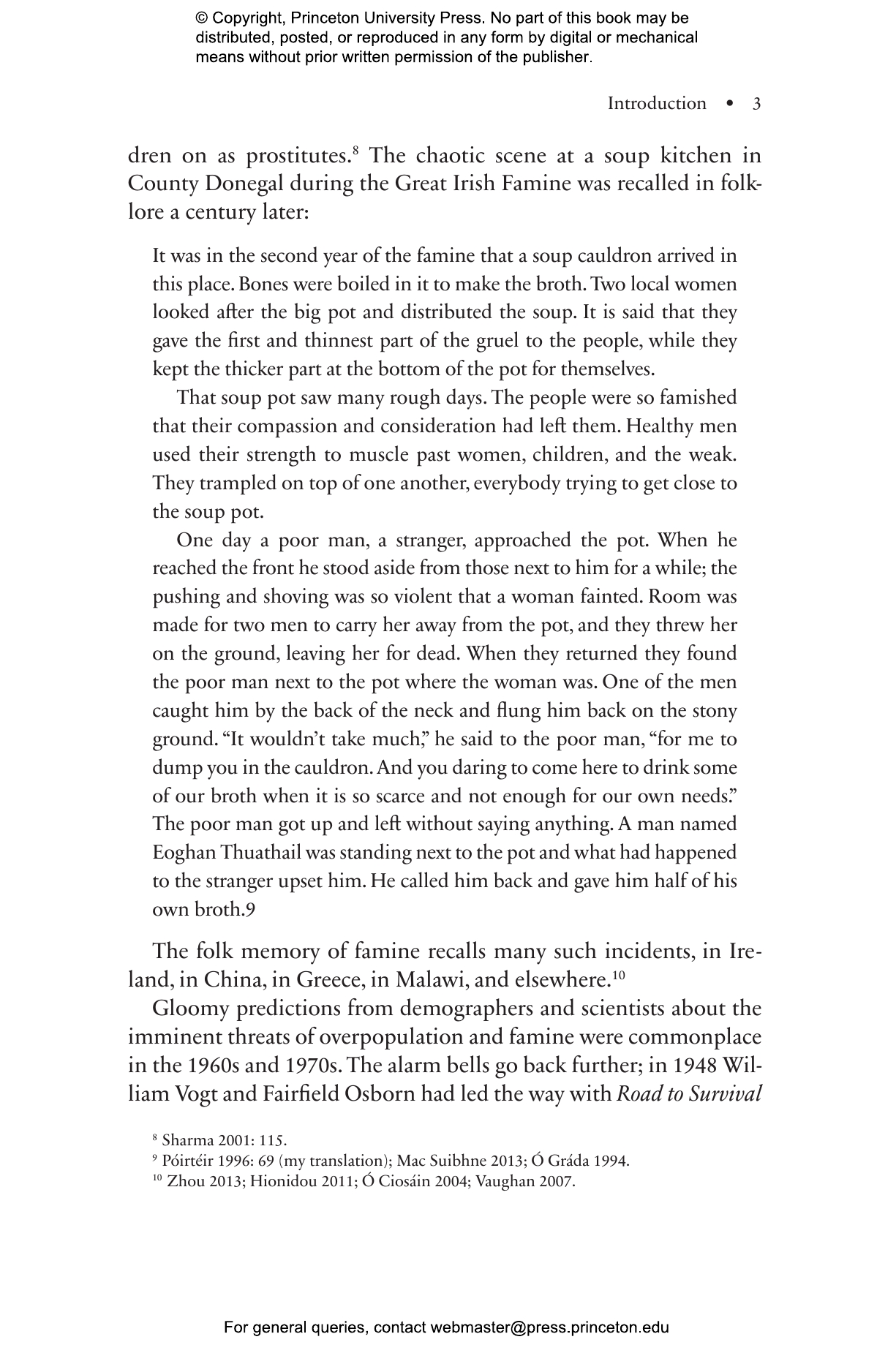 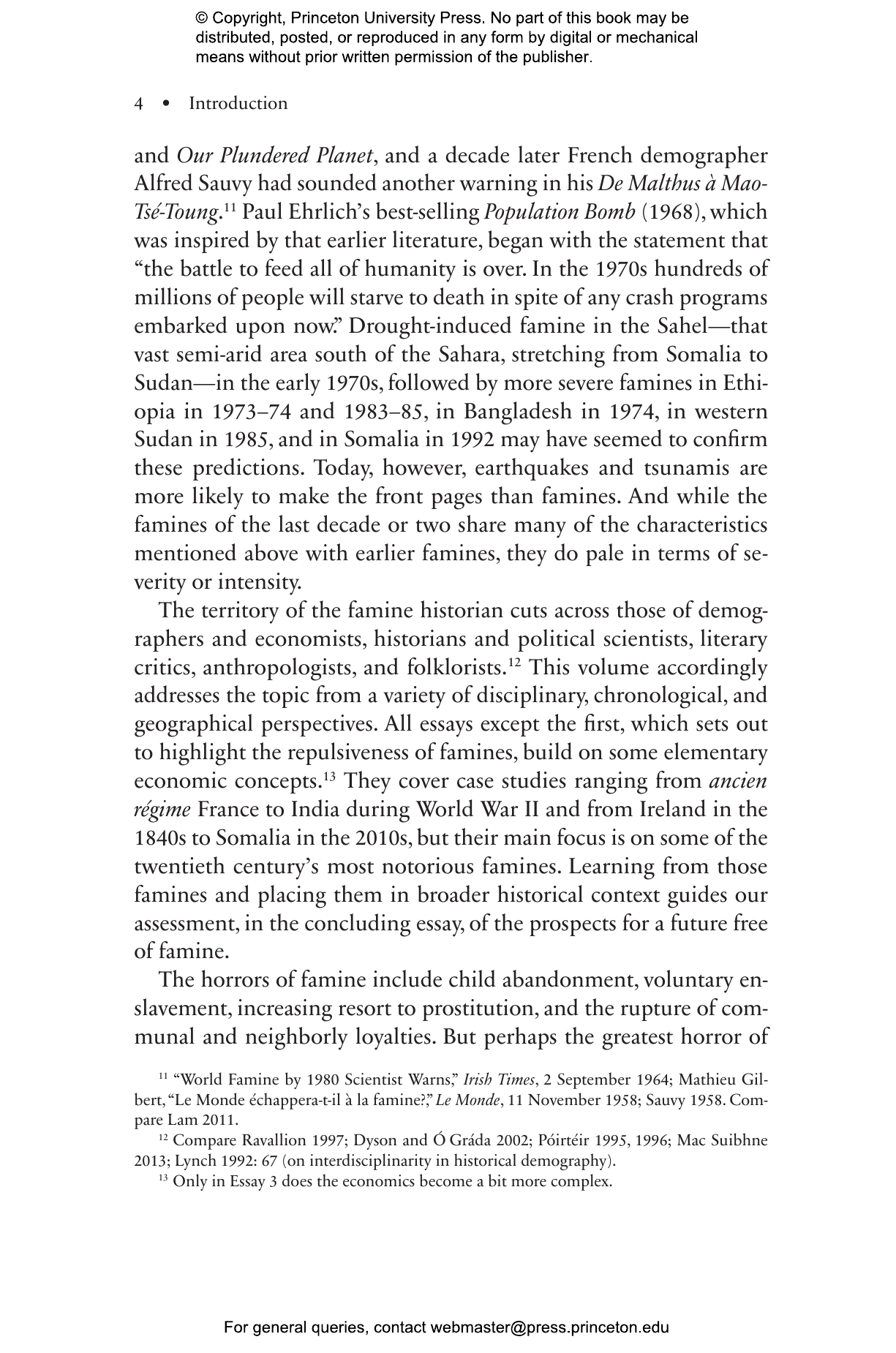 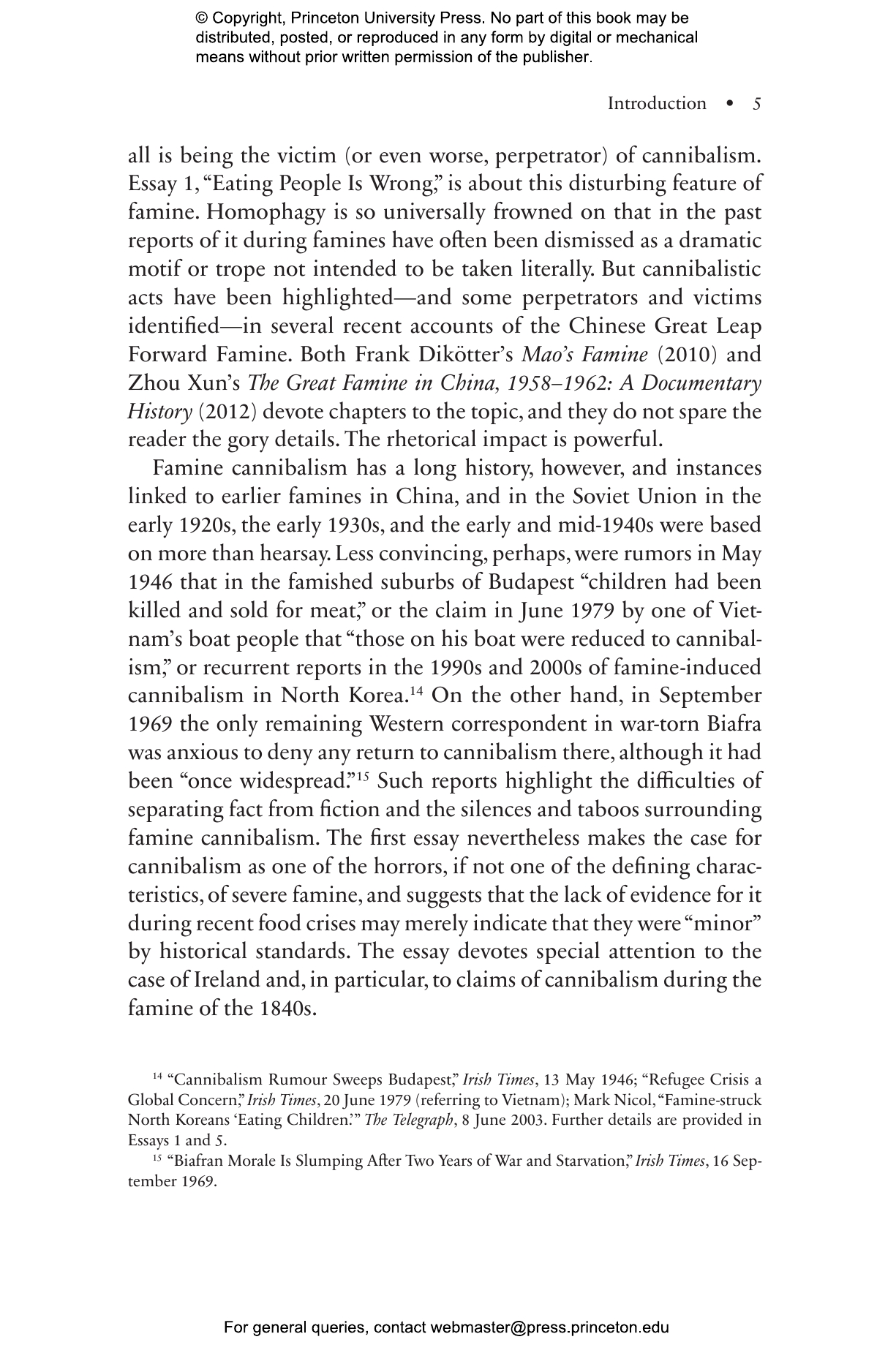 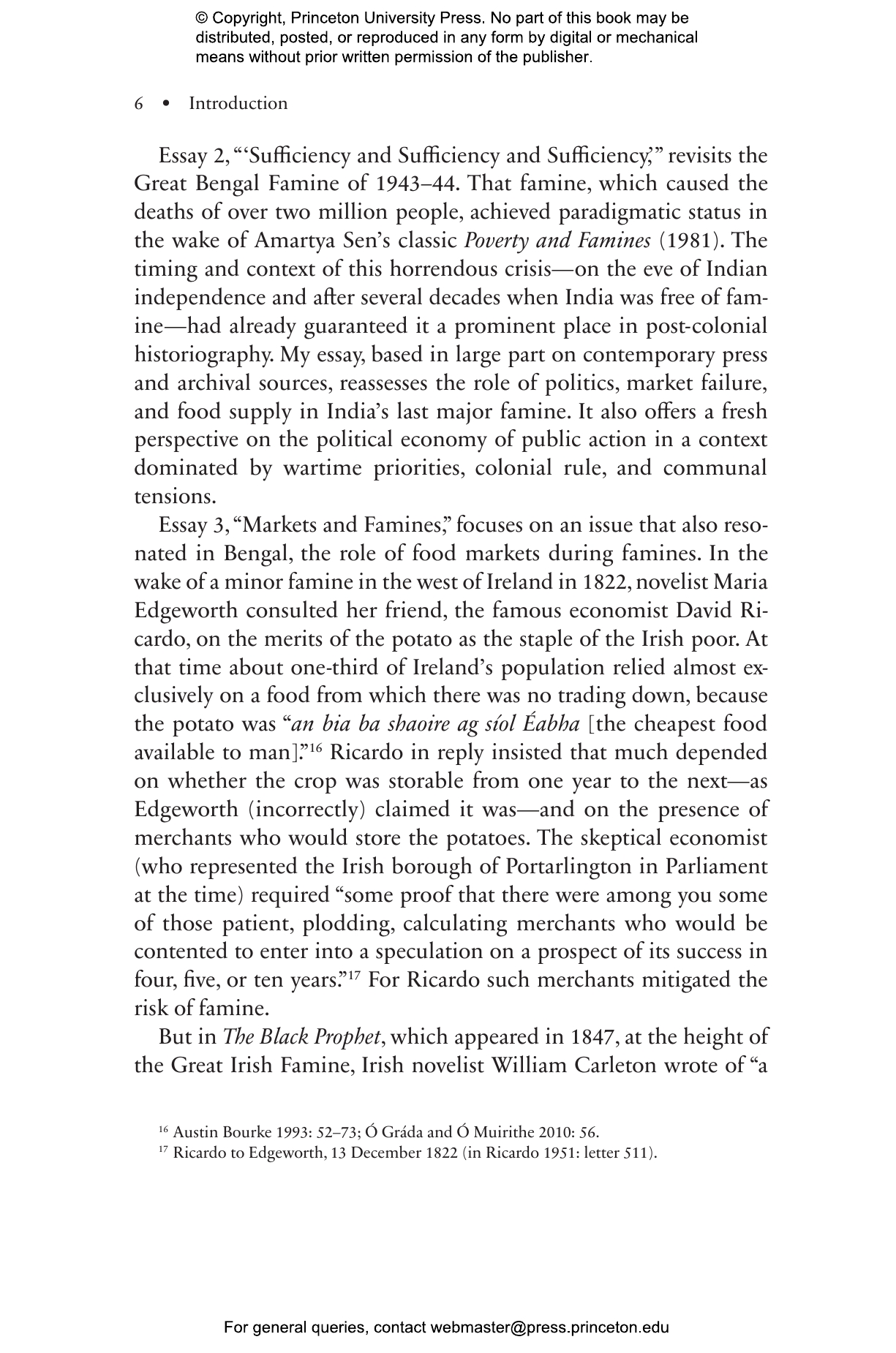 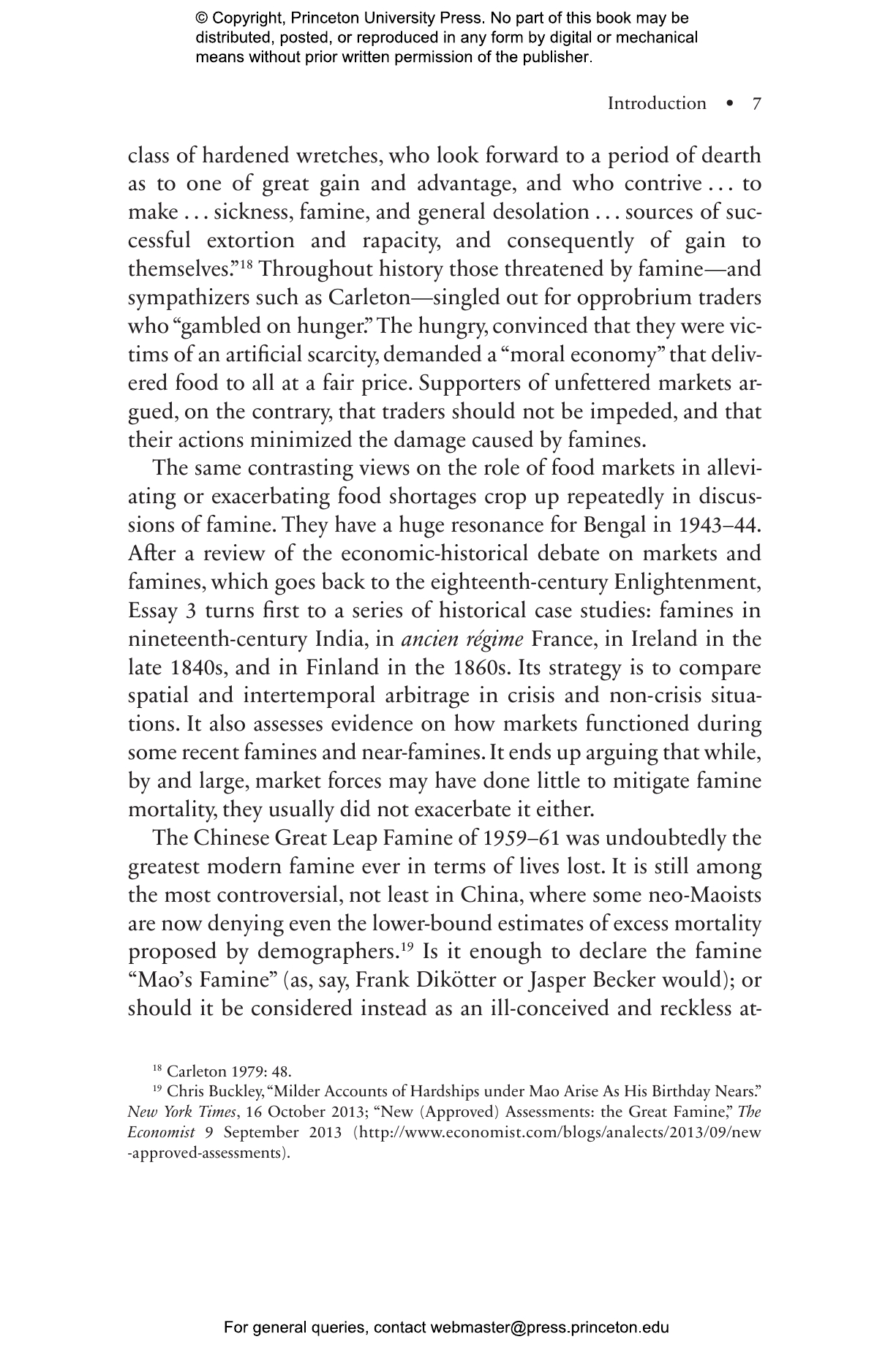 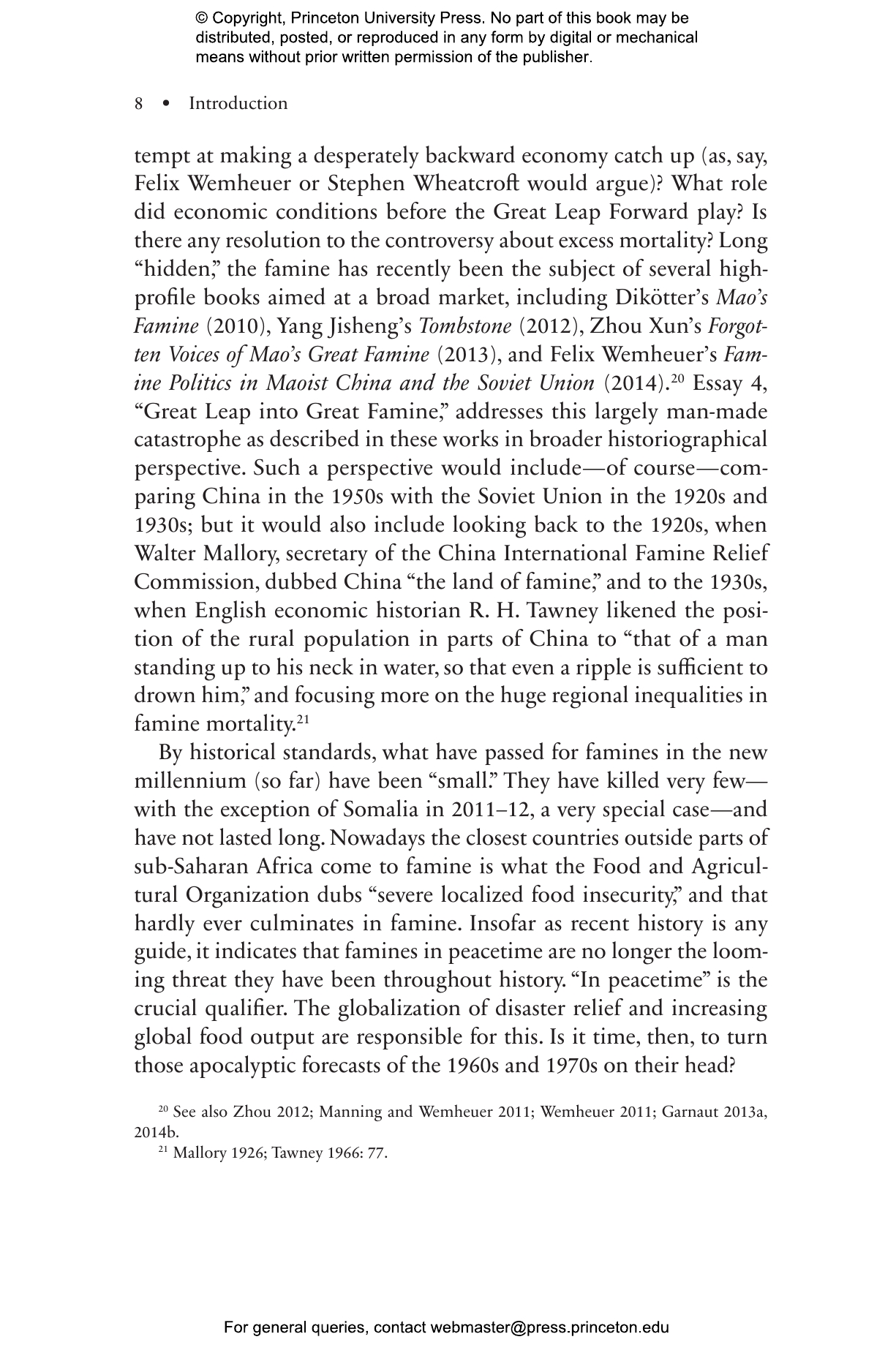 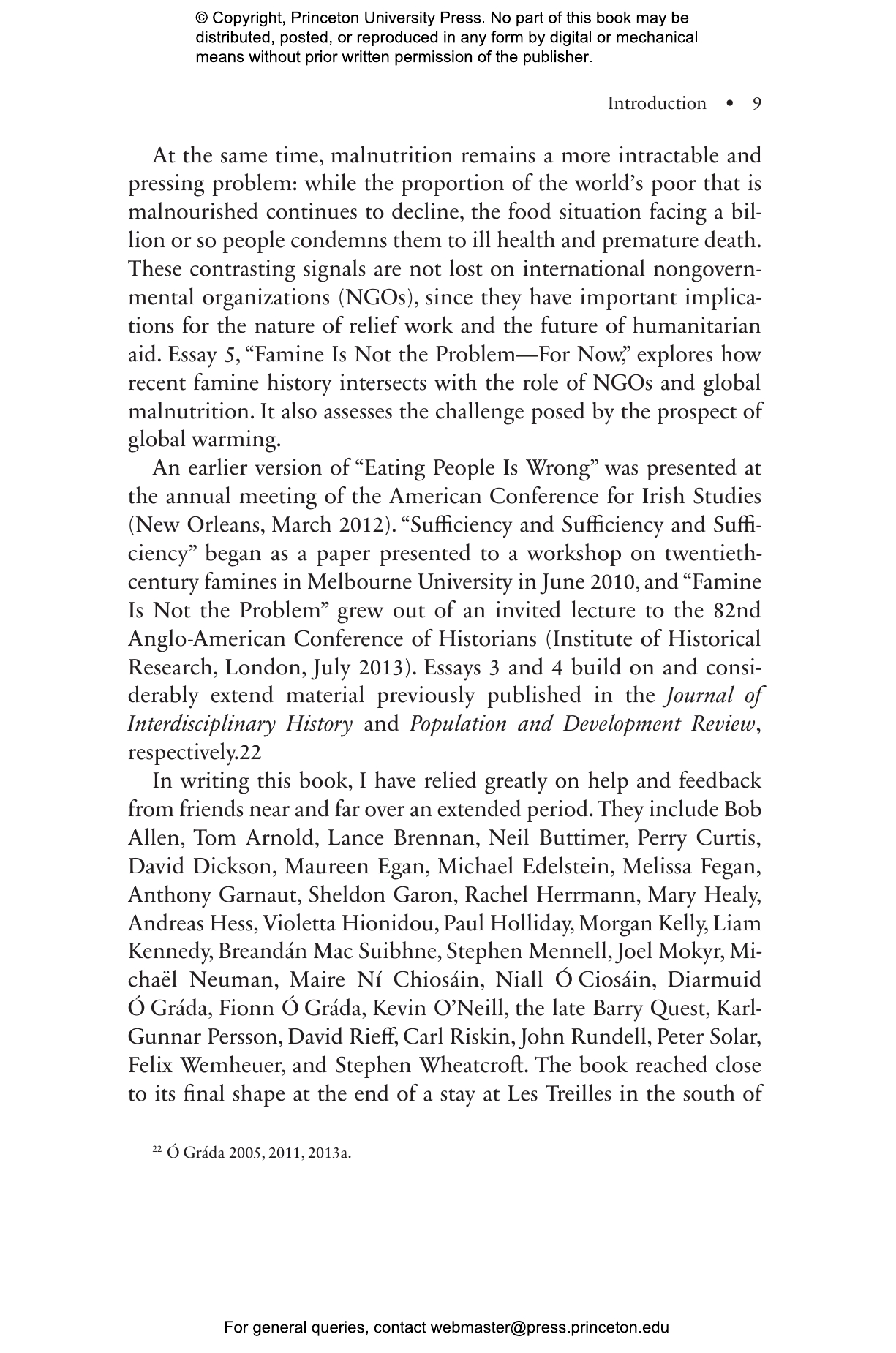 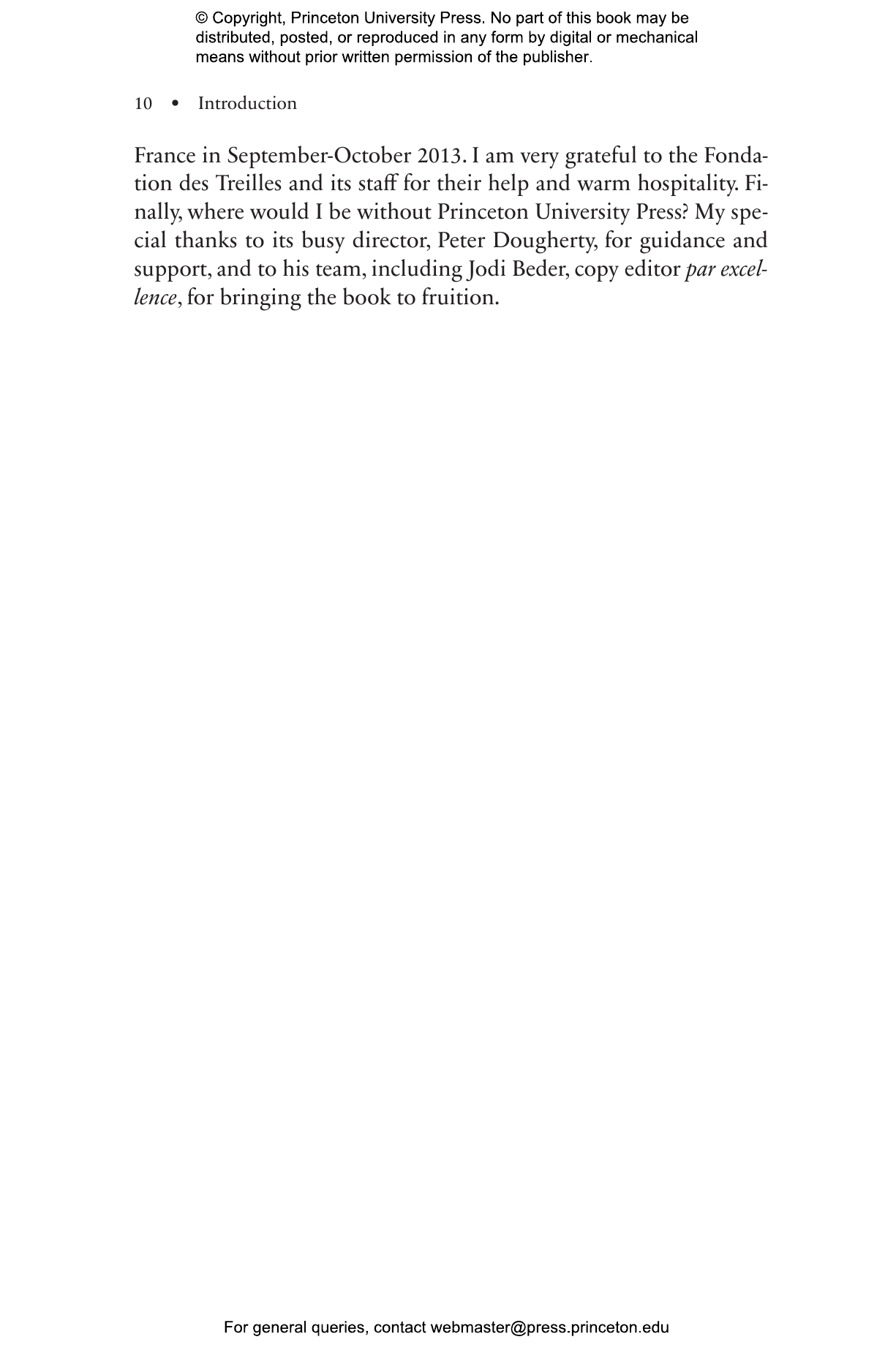 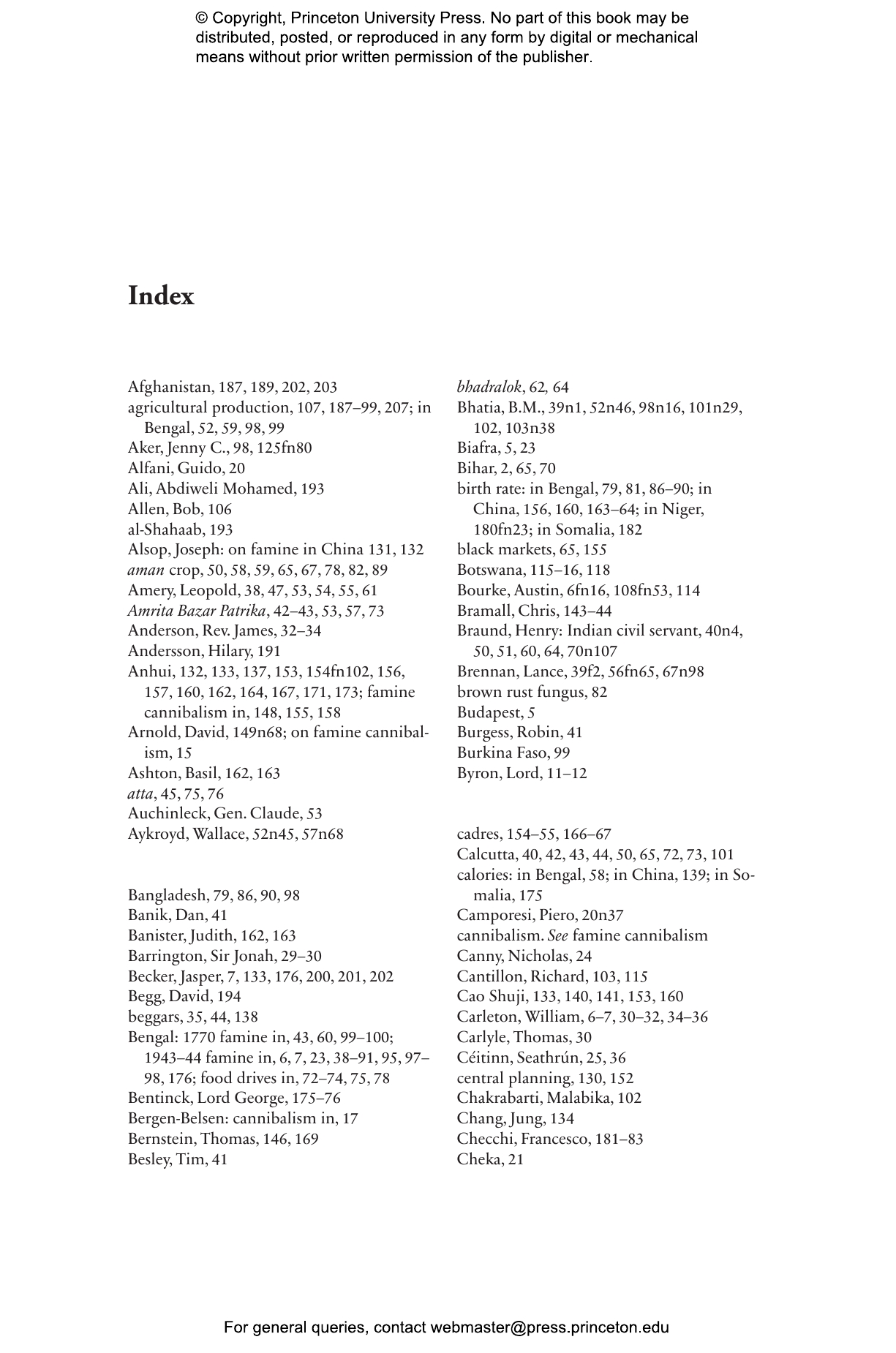 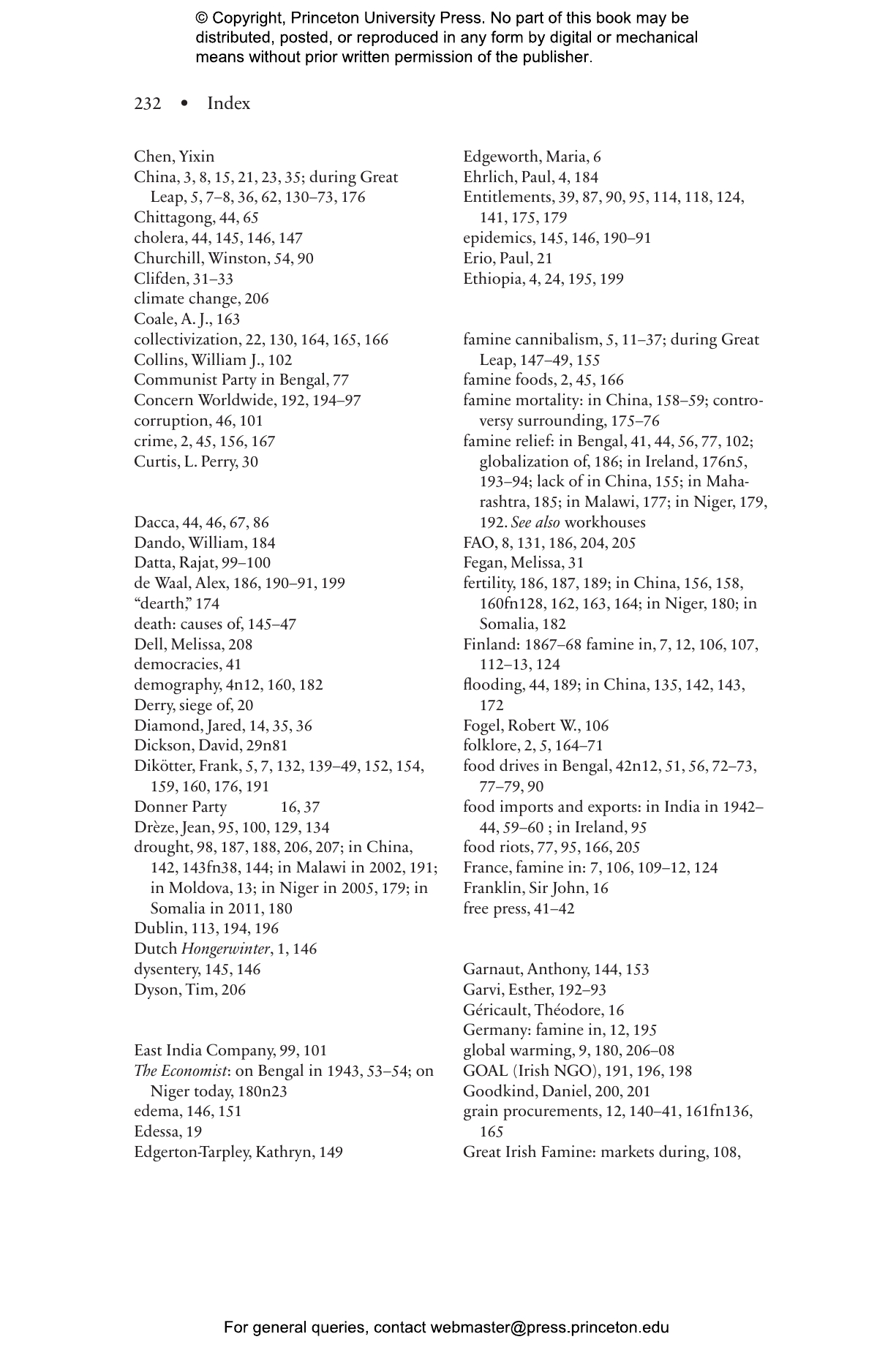 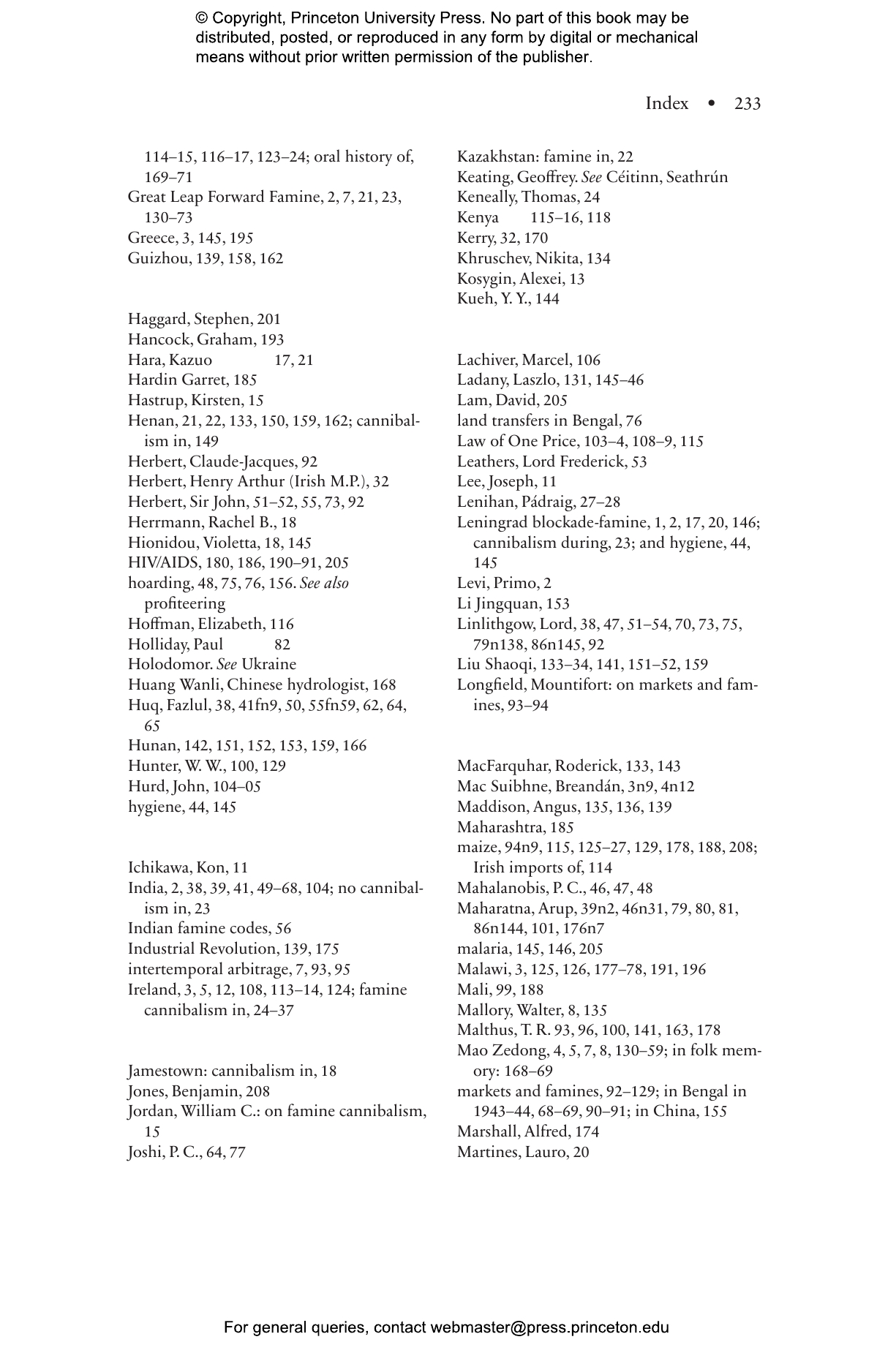 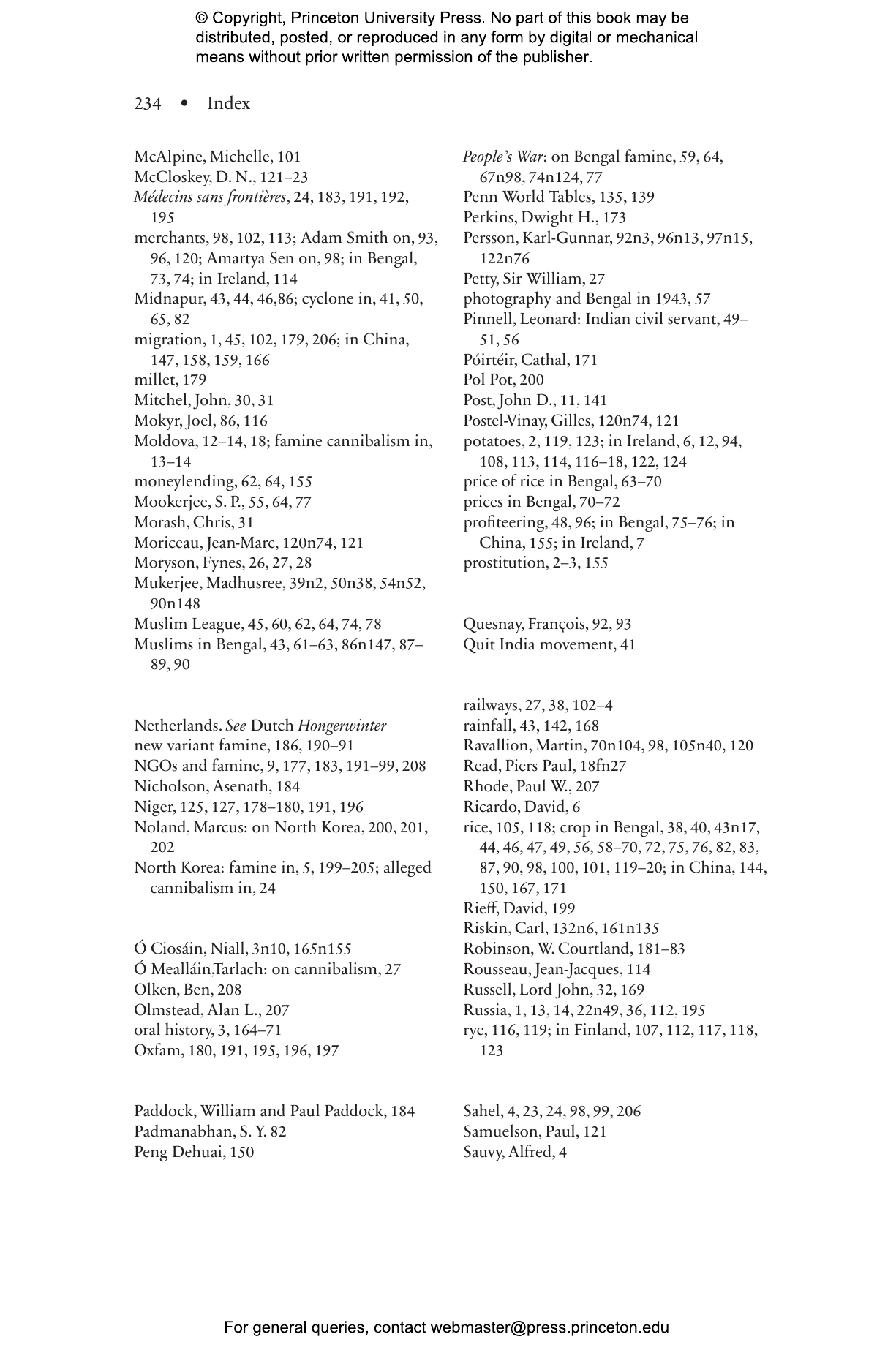 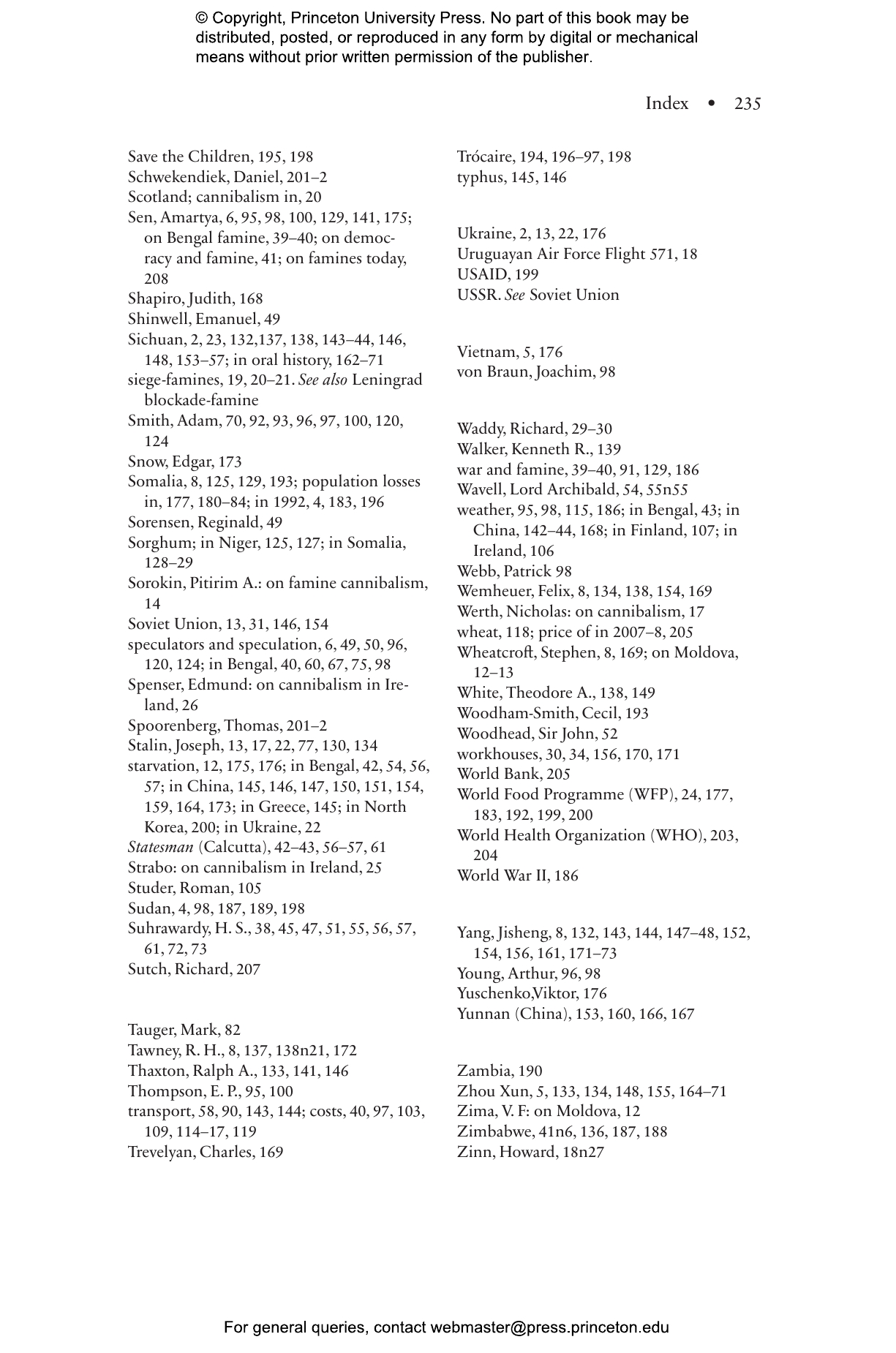 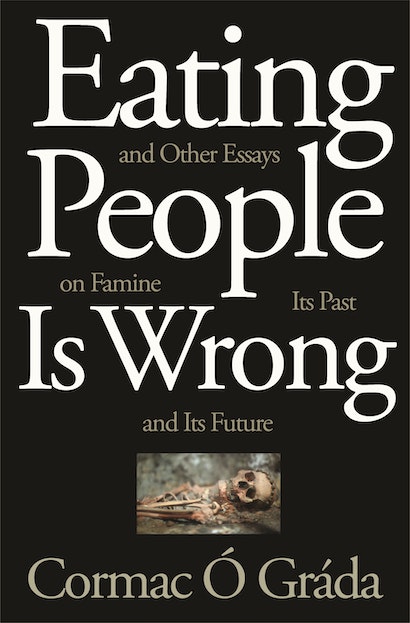 Famines are becoming smaller and rarer, but optimism about the possibility of a famine-free future must be tempered by the threat of global warming. That is just one of the arguments that Cormac Ó Gráda, one of the world’s leading authorities on the history and economics of famine, develops in this wide-ranging book, which provides crucial new perspectives on key questions raised by famines around the globe between the seventeenth and twenty-first centuries.

The book begins with a taboo topic. Ó Gráda argues that cannibalism, while by no means a universal feature of famines and never responsible for more than a tiny proportion of famine deaths, has probably been more common during very severe famines than previously thought. The book goes on to offer new interpretations of two of the twentieth century’s most notorious and controversial famines, the Great Bengal Famine and the Chinese Great Leap Forward Famine. Ó Gráda questions the standard view of the Bengal Famine as a perfect example of market failure, arguing instead that the primary cause was the unwillingness of colonial rulers to divert food from their war effort. The book also addresses the role played by traders and speculators during famines more generally, invoking evidence from famines in France, Ireland, Finland, Malawi, Niger, and Somalia since the 1600s, and overturning Adam Smith’s claim that government attempts to solve food shortages always cause famines.

Thought-provoking and important, this is essential reading for historians, economists, demographers, and anyone else who is interested in the history and possible future of famine.

Cormac Ó Gráda is professor emeritus of economics at University College Dublin. His books include Famine: A Short History and Black '47 and Beyond: The Great Irish Famine in History, Economy, and Memory (both Princeton).

"The Irish economist Cormac Ó Gráda has written a rarity: a coolly rational, cautiously cheerful book about the most viscerally upsetting subject imaginable, mass death from hunger. . . .For Ó Gráda, perhaps the world's expert on the history and economics of famine, now is the time to understand this long-standing terror."—Charles C. Mann, Pacific Standard

"The breadth of primary and secondary resources referenced is notable throughout, and this excellent book by a leading scholar is accessible to all readers."—Choice

"Cormac Ó Gráda knows more than most people about famines, historical and modern, and his short book of essays, Eating People is Wrong, is superb."—Diane Coyle, Enlightened Economist

"The overriding impression one gets from reading Cormac Ó Gráda's latest, brilliant book is that famines the world over are an ugly human stain."—David Nally, Irish Times

"Dealing with some of the most horrendous aspects of famine, the five essays collected here are meticulously scholarly and at the same time arrestingly vivid."—John Gray, New Statesman

"Ó Gráda's book offers a sobering reminder of the importance of making judgments based on good data and unhindered by ideological filters."—Douglas Gollin, Foreign Affairs

"Cormac Ó Gráda has written a beautiful book about a painful and difficult subject, famines. In these five essays, he shows how combining the skills and common sense of the economist with the subtlety and sensitivity of the historian can produce fascinating and deep insights into a topic that few people today think about but that historians and observers of the developing world cannot ignore."—Joel Mokyr, Northwestern University

"Cormac Ó Gráda's collection of essays, Eating People Is Wrong, demonstrates his extraordinary range. His assessment of the incidence of cannibalism in famine times, the subject of the essay that gives the collection its title, will stimulate many other scholars to reconsider their views on this controversial topic. And the other essays, which concentrate on the economic history of famine, in various regions and at various times, sustain his reputation as one of the leading researchers of these calamities."—William Chester Jordan, Princeton University

"After war, famines are perhaps the greatest act of inhumanity perpetrated by our species. As Cormac Ó Gráda shows, famines happen because we let them happen and they bring out the best and worst in people, from cannibalism and the abandonment of children to the heroic sacrifices of parents to protect their children. In clear and open language, Ó Gráda presents the true picture of famines."—Peter Walker, dean of the Falk School of Sustainability, Chatham University

"This is a superb book that should become a classic. Cormac Ó Gráda brings extraordinary social scientific rigor to the history of famine."—Stephen Wheatcroft, University of Melbourne

"Cormac Ó Gráda is today's leading authority on famine and this shows in the high quality of this book and its impressive ability to innovate and further our understanding of the subject. This is an important contribution to economic history, history, economic development, and demography, but it will also appeal to general readers interested in famine."—Guido Alfani, Bocconi University, Milan