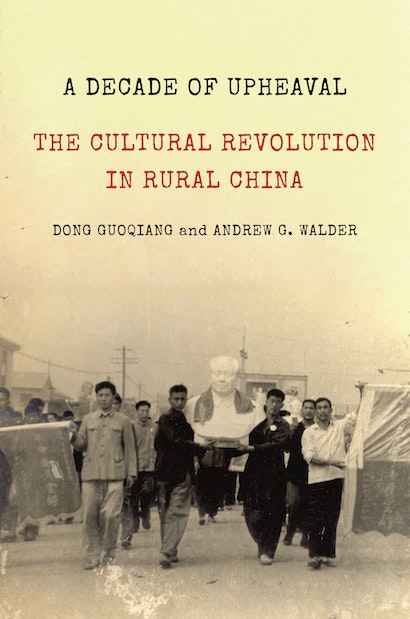 A Decade of Upheaval chronicles the surprising and dramatic political conflicts of a rural Chinese county over the course of the Cultural Revolution. Drawing on an unprecedented range of sources—including work diaries, interviews, internal party documents, and military directives—Dong Guoqiang and Andrew Walder uncover a previously unimagined level of strife in the countryside that began with the Red Guard Movement in 1966 and continued unabated until the death of Mao Zedong in 1976.

Showing how the upheavals of the Cultural Revolution were not limited to urban areas, but reached far into isolated rural regions, Dong and Walder reveal that the intervention of military forces in 1967 encouraged factional divisions in Feng County because different branches of China’s armed forces took various sides in local disputes. The authors also lay bare how the fortunes of local political groups were closely tethered to unpredictable shifts in the decisions of government authorities in Beijing. Eventually, a backlash against suppression and victimization grew in the early 1970s and resulted in active protests, which presaged the settling of scores against radical Maoism.

A meticulous look at how one overlooked region experienced the Cultural Revolution, A Decade of Upheaval illuminates the all-encompassing nature of one of the most unstable periods in modern Chinese history.

Dong Guoqiang is professor of history at Fudan University in Shanghai. Andrew G. Walder is the Denise O’Leary and Kent Thiry Professor of Sociology at Stanford University, where he is also a senior fellow in the Freeman-Spogli Institute of International Studies.

"Based on rich grassroots and interview sources, A Decade of Upheaval looks at how the politics of the Cultural Revolution shaped a single rural county between 1966 and 1976. This is a unique and captivating work, and there is nothing like it."—Jeremy Brown, author of City versus Countryside in Mao’s China

"The first study on a rural county during the Cultural Revolution, A Decade of Upheaval provides a much-needed corrective to many assumptions held about this period. Making use of vast amounts of previously unavailable materials, this significant and effectively organized book dispels common misperceptions and will be enormously influential in how the legacies of contemporary conflicts are understood.”—Daniel Leese, author of Mao Cult

"Dong and Walder have outdone themselves with this incredibly rich and nuanced account of the Cultural Revolution in Jiangsu's Feng County. Deftly weaving together an unusually wide range of documentary sources and interview material, they shed important new light on this tumultuous period in a remote rural area, and challenge longstanding models of factional conflict during the late Mao era."—Patricia M. Thornton, University of Oxford