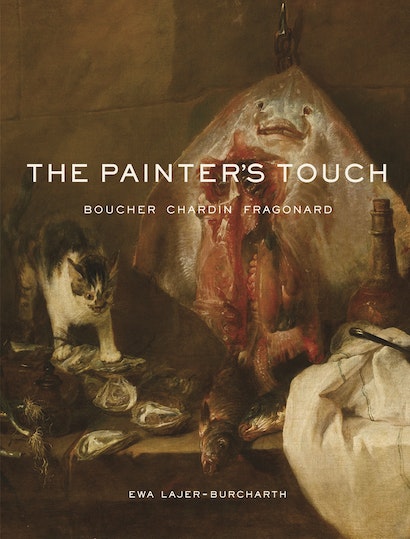 What can be gained from considering a painting not only as an image but also a material object? How does the painter’s own experience of the process of making matter for our understanding of both the painting and its maker? The Painter’s Touch addresses these questions to offer a radical reinterpretation of three paradigmatic French painters of the eighteenth century. In this beautifully illustrated book, Ewa Lajer-Burcharth provides close readings of the works of François Boucher, Jean-Siméon Chardin, and Jean-Honoré Fragonard, entirely recasting our understanding of these painters’ practice. Using the notion of touch, she examines the implications of their strategic investment in materiality and sheds light on the distinct contribution of painting to the culture of the Enlightenment.

Lajer-Burcharth traces how the distinct logic of these painters’ work—the operation of surface in Boucher, the deep materiality of Chardin, and the dynamic morphological structure in Fragonard—contributed to the formation of artistic identity. Through the notion of touch, she repositions these painters in the artistic culture of their time, shifting attention from institutions such as the academy and the Salon to the realms of the market, the medium, and the body. Lajer-Burcharth analyzes Boucher’s commercial tact, Chardin’s interiorized craft, and Fragonard’s materialization of eros. Foregrounding the question of experience—that of the painters and of the people they represent—she shows how painting as a medium contributed to the Enlightenment’s discourse on the self in both its individual and social functions.

By examining what paintings actually “say” in brushstrokes, texture, and paint, The Painter’s Touch transforms our understanding of the role of painting in the emergence of modernity and provides new readings of some of the most important and beloved works of art of the era.

Ewa Lajer-Burcharth is the William Dorr Boardman Professor of Fine Arts at Harvard University. Her books include Chardin Material and Necklines: The Art of Jacques-Louis David after the Terror.

"Ewa Lajer-Burcharth’s book changes our sensibilities for eighteenth-century French art; it makes obscure images accessible and allows us to see familiar paintings afresh. While historically contextualized and psychoanalytically informed, this book seriously foregrounds the painter’s touch and the materiality of images. It is positively driven by an art historical narrative, and its discussions of the object don’t need the underpinning of topical anthropological thing theories. This beautifully produced and generously illustrated book, with close-up images supporting the thick descriptions, is a pleasure to read and to handle. And one wouldn’t use these terms lightly after having savored the lessons of The Painter’s Touch."—Mechthild Frend, Art Bulletin

"Magisterially written . . . this book is a tour de force of interpretative analysis. Beautifully produced and generously illustrated, it offers a thoroughgoing, radical and at times controversial reassessment of the lives and careers of three of the eighteenth century’s greatest painters."—Colin B. Bailey, Burlington Magazine

"Ewa Lajer-Burcharth has written one of the first books that elevates eighteenth-century genre painting to the level of artistic and philosophical complexity that it truly deserves. One could say that it is a lesson in taking the art on its own terms. The result of close to a decade of sustained thought and research, the book is simply stunning. . . . It is Lajer-Burcharth’s singular achievement to give us a very different eighteenth century, a ‘luminous elsewhere’ that’s also right here with us. And radically ordinary."—Kevin Chua, Nonsite

"Ewa Lajer-Burcharth’s new work continues her radical and original accounts of eighteenth-century French painting. . . . The theories and ideas invoked belong both to eighteenth-century contexts and to unexpected modern inclusions, such as the psychoanalytic philosophy of Andre´ Green. The reader is involved in a vigorous and at times provocative debate, vital to our understanding of the origins of modernity."—Richard Hobbs, French Studies: A Quarterly Review

"Provocative and unsettling. . . . [The Painter's Touch] will surely provide the starting point of new thinking about eighteenth-century French art for decades to come."—Katie Scott, Art History

"In this long-anticipated book, Lajer-Burcharth looks more closely and originally at the very paint of masterpieces by Boucher, Chardin, and Fragonard than anyone may ever have done before. Unexpectedly extending the material turn to the medium we have come to take for granted, oil paint, Lajer-Burcharth convinces us that all great paintings contain deep meanings within their forms. If this book doesn't dispel the aura of frivolity called rococo around three great artists, nothing will."—Anne Higonnet, Barnard College, Columbia University, author of A Museum of One’s Own: Private Collecting, Public Gift

"Brilliantly imaginative and provocative, The Painter's Touch is a hugely impressive book that radically recasts our idea of making selves and things, and how they are interformed, at a critical moment of Western modernity."—Satish Padiyar, author of Chains: David, Canova, and the Fall of the Public Hero in Postrevolutionary France