How social scientists' disagreements about their key words and distinctions have been misconceived, and what to do about it 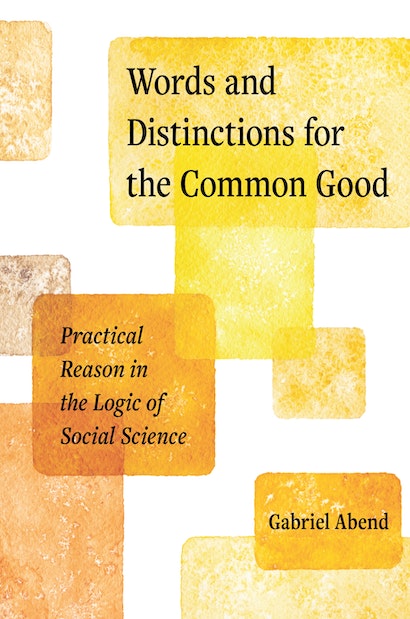 Social scientists do research on a variety of topics—gender, capitalism, populism, and race and ethnicity, among others. They make descriptive and explanatory claims about empathy, intelligence, neoliberalism, and power. They advise policymakers on diversity, digitalization, work, and religion. And yet, as Gabriel Abend points out in this provocative book, they can’t agree on what these things are and how to identify them. How to tell if something is a religion or a cult or a sect? What is empathy? What makes this society a capitalist one? Disputes of this sort arise again and again in the social sciences.

Abend argues that these disagreements have been doubly misconceived. First, they conflate two questions: how a social science community should use its most important words, and what distinctions it should accept and work with. Second, there’s no fact of the matter about either. Instead, they’re practical reason questions for a community, which aim at epistemically and morally good outcomes. Abend calls on social science communities to work together on their words, distinctions, and classifications. They must make collective decisions about the uses of words, the acceptability of distinctions, and the criteria for assessing both. These decisions aren’t up to individual scholars; the community gets the last word. According to Abend, the common good, justice, and equality should play a significant role in the logic of scientific research.

Gabriel Abend is professor of sociology at University of Lucerne and the author of The Moral Background: An Inquiry into the History of Business Ethics (Princeton).

Gabriel Abend is professor of sociology at University of Lucerne and the author of The Moral Background: An Inquiry into the History of Business Ethics (Princeton).

“This is a remarkable, original, sophisticated, challenging, thought-provoking book that makes a significant contribution to the discussion of a set of very general and deep issues that beset social scientists but are, in Abend’s opinion, poorly understood and thus inadequately addressed by them.”—Steven Lukes, New York University

“Gabriel Abend brilliantly takes on some of the knottiest problems in the social sciences, the conundrums posed by the basic tools of the trade: our words. Forget about ‘agency,’ ‘class’ or ‘race’—how about ‘sandwich’ and ‘planet’? With lucid prose, irresistible zest, and surprising examples, Abend invites us to reconsider the foundations of social thought. This book will persuade even the most no-nonsense empiricist to see how much is at stake in the mere act of putting a name on something.”—Webb Keane, University of Michigan

"In this uniquely witty, profound, and wide-ranging book, Abend offers a highly original discussion of how to produce better social science, and down the line, better societies. In a deeply learned argument, he develops a challenging and surprising analysis of the interlinkages between interests, the law, and classification in knowledge production, highlighting their many real-world (moral and distributive) consequences. A must-read!”—Michèle Lamont, author of How Professors Think: Inside the Curious World of Academic Judgment