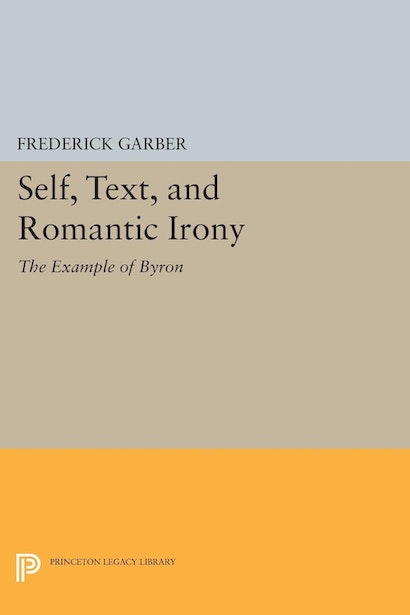 Frederick Garber takes up in detail several problems of the self broached in his previous book, The Autonomy of the Self from Richardson to Huysmans (Princeton, 1982). Using patterns in Byron’s canon as models, he focuses on the relations of self-making and text-making as a central Romantic issue. For Byron and many of his contemporaries, putting a text into the world meant putting a self there along with it, and it also meant that the difficulties of establishing the one inevitably reflect the parallel difficulties in the other.

Professor Garber discusses some of Byron’s key texts and shows how their development leads to an impasse involving both self and text. Byron’s way out of these dilemmas was the mode of Romantic irony, of which he is one of the greatest exemplars. The study then moves into broader areas of Anglo-European literature, its ultimate purpose being to argue not only for the efficacy of such irony but for its position as something more than a mere alternative to Romantic organicism.

"Garber assimilates Byron into the world of contemporary sensibility and thinking. He is one of the best stylists among American literary scholars and critics, and he is the first to create for us a Byron who is deeply involved in some of the most momentous and decisive questions of our civilization. The book will become a basic resource for the teaching of Byron and will be of great interest to scholars in the general humanities and criticism."—Virgil P. Nemoianu, Catholic University of America