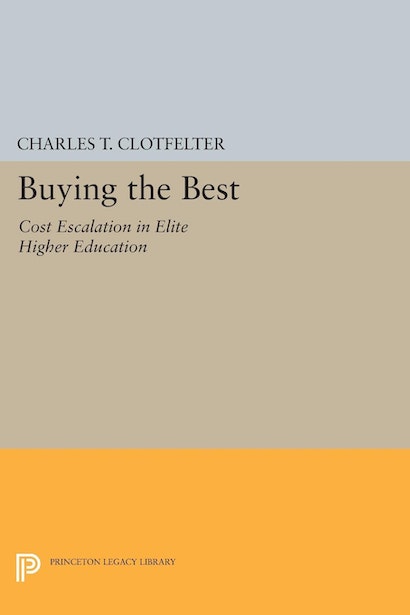 Since the early 1980s, the rapidly increasing cost of college, together with what many see as inadequate attention to teaching, has elicited a barrage of protest. Buying the Best looks at the realities behind these criticisms — at the economic factors that are in fact driving the institutions that have been described as machines without brakes. In designing his study, Charles Clotfelter examines the escalation in spending in the arts and sciences at four elite institutions: Harvard, Duke, Chicago, and Carleton. He argues that the rise in costs has less to do with increasing faculty salaries or lowered productivity than with a broad-based effort to improve quality, provide new services to students, pay for large investments in new facilities and equipment (including computers), and ensure access for low-income students through increasingly expensive financial aid.

In Clotfelter’s view, spiraling costs arise from the institutions’ lofty ambitions and are made possible by steadily intensifying demand for places in the country’s elite colleges and universities. Only if this demand slackens will universities be pressured to make cuts or pursue efficiencies. Buying the Best is the first study to make use of the internal historical records of specific institutions, as opposed to the frequently unreliable aggregate records made available by the federal government for the use of survey researchers. As such, it has the virtue of allowing Clotfelter to draw much more realistic comparative conclusions than have hitherto been reported. While acknowledging the obvious drawbacks of a small sample, Clotfelter notes that the institutions studied are significant for the disproportionate influence they, and comparable elite institutions, exercise upon research and upon the training of future leaders. The book contains a foreword by William G. Bowen, President of the Mellon Foundation, and Harold T. Shapiro, President of Princeton University.

“Concern about ever-rising costs runs like a thread through the myriad critiques of higher education that have been published in recent years… . One of the great contributions of Clotfelter’s work is to dismiss easy explanations for the problems that worry us. With some of the scales removed from their eyes, both those with responsibility for the future of higher education and observers who continue to expect an ever-wider scope of effort from particular colleges and universities, can now adjust their focus. Armed with this original and extremely useful analysis, we can confront more directly (and with less romanticism) the real choices before us as we seek to employ limited resources most effectively in the service of teaching and research.”-William G. Bowen, President, Mellon Foundation, Harold T. Shapiro, President, Princeton University, from the foreword

"Charles Clotfelter, an economist and former vice provost and vice chancellor at Duke University, examines the explanations for the rapid growth in spending in the nation's leading private research universities since 1976-77 . . . Buying the Best is a thought-provoking and compelling analysis, with implications well beyond its focus on higher education."—Contemporary Sociology

"Clotfelter breaks new ground in furthering our understanding of the "cost disease" afflicting American higher education over the past two decades. He accomplishes this by skillfully combining national and institutional data, along with detailed figures for a selected group of departments at four private universities."—W. Lee Hansen, University of Wisconsin