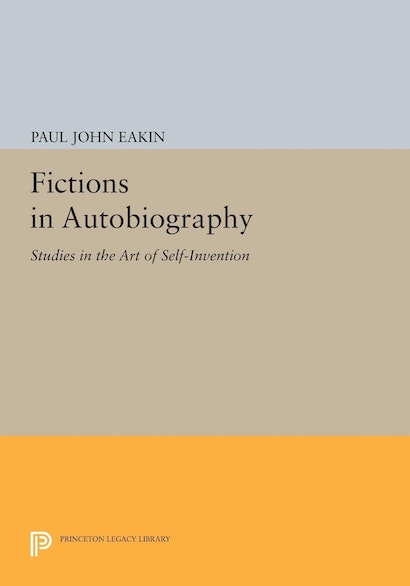 Investigating autobiographical writing of Mary McCarthy, Henry James, Jean-Paul Sartre, Saul Friedlander, and Maxine Hong Kingston, this book argues that autobiographical truth is not a fixed but an evolving content in a process of self-creation. Further, Paul John Eakin contends, the self at the center of all autobiography is necessarily fictive. Professor Eakin shows that the autobiographical impulse is simply a special form of reflexive consciousness: from a developmental viewpoint, the autobiographical act is a mode of self-invention always practiced first in living and only eventually, and occasionally, in writing.

"Paul John Eakin's Fictions in Autobiography does so many things so well that it is difficult to know where to begin to praise the book. . . . As autobiography has been the dominant mode in literature of the twentieth century, so critical attention to the questions posed by the autobiographical act has become the principal preoccupation of theorists across the entire critical spectrum. And Eakin's book is both a superb exercise in thinking through these questions as they rise out of a consideration of half a dozen exemplary texts and at the same time an admirable summary, recapitulation, and extension of what has been said, directly and indirectly, on the subject in the past quarter of a century."—James Olney, American Literature

"Fictions in Autobiography is a judicious, far-ranging, immensely clarifying discussion of the modern art of self-construction which addresses several issues long perplexing readers and critics. . . . If story-telling is a basic mode of existence as well as a specific literary form, this is best demonstrated in autobiographies, particularly those by Mary McCarthy, Henry James, Jean-Paul Sartre, Vladimir Nabokov, Alfred Kazin, Frank Conroy, Saul Friedlnder, and Maxine Hong Kingston. Eakin selects these texts because each is about the making of existential fictions by both actor and author."—American Studies