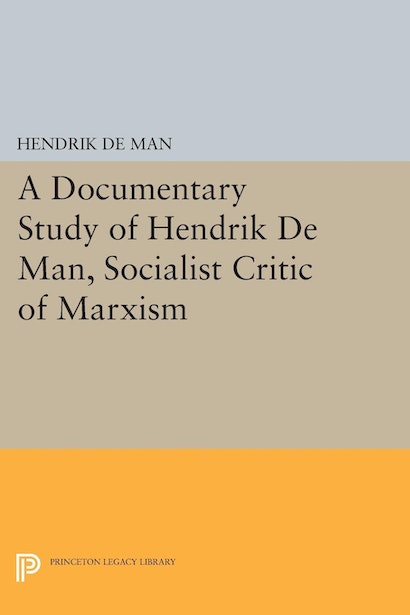 In this collection of excerpts from the essential works of Hendrik de Man (1885-1953), Peter Dodge reinstates in historical consciousness this pioneer sociologist of the European socialist movement and of labor in industrial society. Regarded before World War II as pre-eminent among socialist theoreticians, comparable to Marx himself, de Man fell into obscurity when his equivocal neutralist stance during the Occupation of his native Belgium undermined his political legitimacy. Yet de Man’s observations on the class order of capitalist society, on the difficulties of establishing effective industrial democracy, and on the nature of industrial society may be even more relevant today than they were in early twentieth-century Europe.

While largely accepting the Marxist analysis of capitalism, de Man also drew attention to the unacknowledged collapse of many of its assumptions. Insofar as capitalism evolved in ways that Marx had not foreseen, de Man partially attributes the fate of socialism to the limitations of Marxism’s nineteenth-century mode of analysis.

Selecting from the seventeen books, forty-odd brochures, and some four hundred articles that comprise de Man’s works, the editor chooses those passages that are of primary significance for dc Man’s intellectual development and for his contribution to social analysis. In addition to explanatory headnotes and an Introduction to de Man’s life, the volume contains a selective bibliography of primary and secondary material.