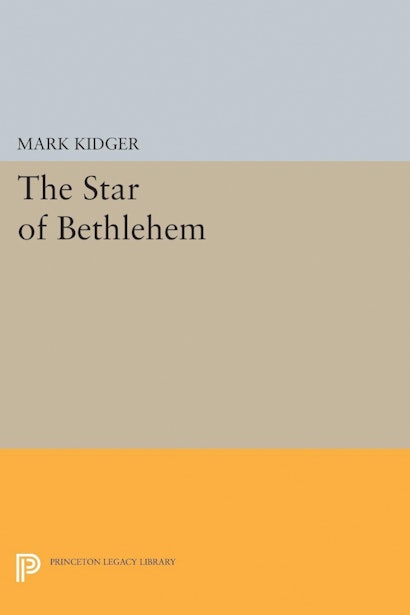 Two thousand years ago, according to the Bible, a star rose low in the east and stopped high above Bethlehem. Was it a miracle, a sign from God to herald the birth of Christ? Was there a star at all, or was it simply added to the Bible to fulfill the Old Testament prophecy concerning the birth of the Messiah? Or was the Star of Bethlehem an actual astronomical event? For hundreds of years, astronomers as prominent as Johannes Kepler have sought an answer to this last baffling question. In The Star of Bethlehem, Mark Kidger brings all the tools of modern science, years of historical research, and an infectious spirit of inquiry to bear on the mystery. He sifts through an astonishing variety of ideas, evidence, and information — including Babylonian sky charts, medieval paintings, data from space probes, and even calculations about the speed of a camel — to present a graceful, original, and scientifically compelling account of what it may have been that illuminated the night skies two millennia ago. Kidger begins with the stories of early Christians, comparing Matthew’s tale of the Star and the three Magi who followed it to Bethlehem with lesser-known accounts excluded from the Bible. Crucially, Kidger follows the latest biblical scholarship in placing Christ’s birth between 7 and 5 B.C., which leads him to reject various phenomena that other scientists have proposed as the Star. In clear, colorful prose, he then leads us through the arguments for and against the remaining astronomical candidates. Could the Star have been Venus? What about a meteor or a rare type of meteor shower? Could it have been Halley’s Comet, as featured in Giotto’s famous painting of the Nativity? Or, as Kidger suspects, was the Star a combination of events — a nova recorded in ancient Chinese and Korean manuscripts preceded by a series of other events, including an unusual triple conjunction of planets?

"An easily accessible style permits readers with minimal scientific training to share in the excitement of Kidger's rare feat of scholarly sleuthing. . . . Kidger will not only convince all doubters, but his book will reset the terms for future attempts to put the scriptural Star in scientific context."—Booklist

"Plenty of new and old data about the night sky and more than a little ancient history inform Kidger's clear account of his own and other's theories about the portent that led the Magi to Judea."—Publisher's Weekly

"Stunningly, incredibly wonderfully an astronomer is now claiming that the age old story we were told as children may be based on the truth. . . . I am inclined to agree with him. [This is] the most compelling solution yet to the mystery."—Robert Matthew, The Express

There are innumerable theories about what the Star of Bethlehem may have been—if anything! Kidger's study is particularly exhaustive.... It is well organised and well written, and it is unquestionably thought-provoking."—Patrick Moore, astronomer who has specialized in studies of the Moon, host of BBC Television's "The Sky at Night," Past President of the British Astronomical Association

"Star of Bethlehem deals with a subject of perennial fascination. Kidger explains matters clearly.... The book should prove of interest to general readers."—Laurence Marschall, Gettysburg College, author of The Supernova Story