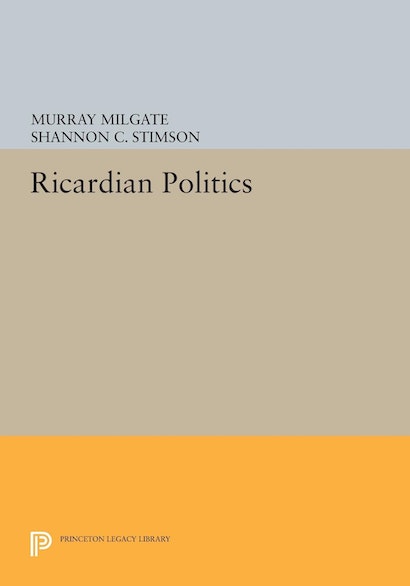 Few deny that the work of economists has often embodied or stimulated significant contributions to political thought. Smith, Keynes, Hayek, and Friedman are good examples. However, the work of the great classical economist David Ricardo is not usually placed in such company. Despite Ricardo’s affiliations with philosophical radicals like Bentham and James Mill, the most that previous scholars have been prepared to allow is that if Ricardo spoke to political questions at all, he addressed only economic policy. This book argues forcefully for a revision of that received opinion. Murray Milgate and Shannon Stimson show that Ricardo articulated a distinctive political vision, and that he did so in a novel and sophisticated way by linking arguments for democratic reform with the conclusions of political economy. Ricardian Politics examines compelling but neglected evidence of how Ricardo deployed economic theory to construct a new view of politics. Milgate and Stimson analyze the case he made for a more inclusive political society and for a more representative and democratic government, discuss how his argument was structured by his economics, and explicitly draw out comparisons with Bentham and James Mill. Ricardo wrote at a critical moment, which saw the consolidation of capitalist industry and the emergence of modern democratic political ideology. By attending to the historical context, this book recovers a more accurate picture of his thought, while contributing to the current renewal of research on the relationship between economic and political thought in early nineteenth-century Britain.