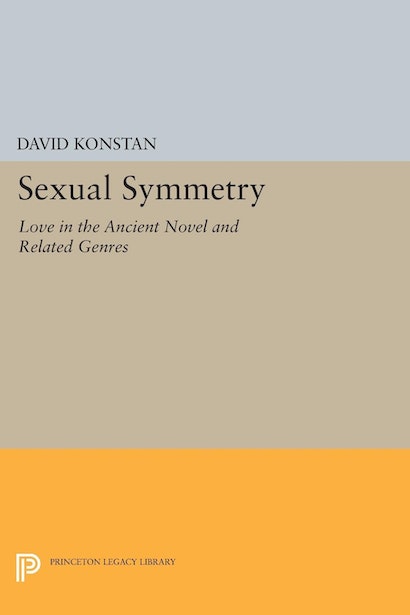 “In the Greek romances,” writes David Konstan, “sighs, tears, and suicide attempts are as characteristic of the male as of the female in distress; ruses, disguises, and outright violence in defense of one’s chastity are as much the part of the female as of the male.” Exploring how erotic love is represented in ancient amatory literature, Konstan points to the symmetry in the passion of the hero and heroine as a unique feature of the Greek novel: they fall mutually in love, they are of approximately the same age and social class, and their reciprocal attachment ends in marriage. He shows how the plots of the novels are perfectly adapted to expressing this symmetry and how, because of their structure, they differ from classical epic, elegy, comedy, tragedy, and other genres, including modern novels ranging from Sidney to Harlequin romances.

"Modern readers of the ancient novels . . . can consider themselves fortunate, for the pleasure they take in those novels will be doubled by David Konstan's Sexual Symmetry, which shows that the love relationship a their centers consists of a pairing of equal partners utterly unique in ancient literary constructions of eros and foreign to most modern ones as well."—Bryn Mawr Classical Review

"David Konstan has staked out an ambitious project for himself, nothing less than a discussion of love—physical, spiritual, familial, either real or imaginary—in the ancient world. His accomplishment marks a major contribution to the field of ancient prose fiction and ancient erotics."—Gareth Schmeling, University of Florida