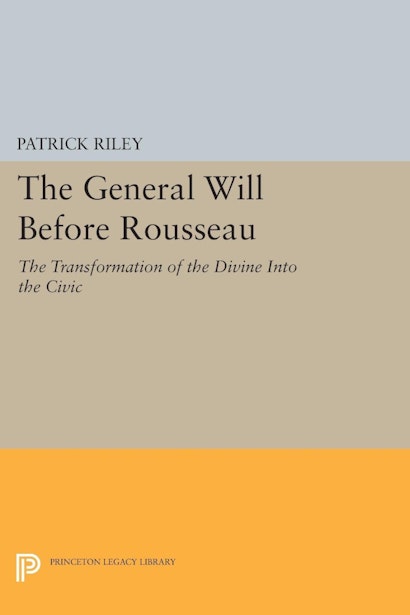 Patrick Riley traces the forgotten roots of Rousseau’s concept to seventeenth-century questions about the justice of God. If He wills that all men be saved, does He have a general will that produces universal salvation? And, if He does not, why does He will particularly” that some men be damned? The theological origin of the “general will” was important to Rousseau himself. He uses the language of divinity bequeathed to him by Pascal, Malebranche, Fenelon, and others to dignify, to elevate, and to “save” politics.

"A most important contribution to the study of Enlightenment political and social ideas, accessible to public library patrons as well as academic readers. The author presents a very convincing claim that the doctrine of the general will emerged as a theological idea, predating by over a century Rousseau's famous political application in the Social Contract. There is a very impressive marshaling of literary evidence, moderated by a clear facility with the argumentative and writing styles of the major participants."—Choice

"This is a remarkable book—a learned, lucid, and original study of the gradual transformation of a concept that derives much of its force from its until now forgotten origins. No one has ever told this story before."—Judith N. Shklar, Harvard University