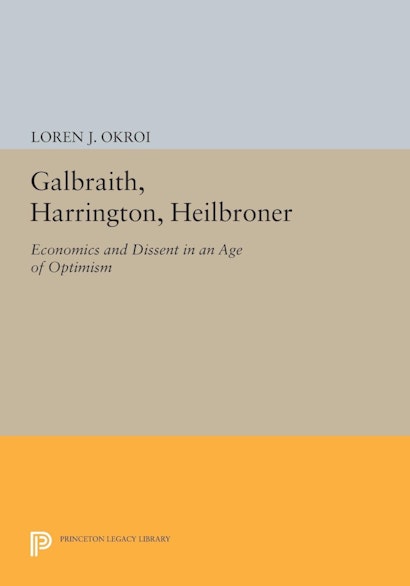 In a remarkably lucid and flowing style, Loren Okroi analyzes the ideas of three leading reformer-critics in the United States and places their main arguments in the context of the economic, social, and political history of postwar America. In so doing, he provides not only a skillful introduction to American social thought since the 1950s but also a wide-ranging examination of the contemporary failures of American liberal ideology. As he explicates the works of these three men — all of whom moved easily between the academic world and the arenas of politics, government, or journalism — it becomes clear that present policy debates have not even begun to resolve the dilemmas their writings have exposed.

Millions of readers know J. K. Galbraith, the renowned Harvard economist and social theorist who developed the concept of the “New Industrial State”; Michael Harrington, the de facto leader of the American socialist movement who revealed the existence of the “other America”; and Robert Heilbroner, the incisive economic thinker who questioned the naive optimism of Americans even before it significantly eroded in the mid-1970s. In this book they emerge as individuals, as thinkers, and as part of a larger picture of American efforts to reconcile democratic values and humane social goals with modern corporate capitalism.

The study begins with a portrait of the U.S. economy and society at the end of the Civil War and discusses the momentous changes brought about by the rapid industrialization that followed. The central portion revolves around Galbraith, Harrington, and Heilbroner and explores their contributions to the intellectual and political discourse on key issues confronting America in the decades after 1945: the evolutionary trajectory of managerial capitalism; the persistence of poverty and class divisions; the expansion of the welfare state and the public sector in general; and the assault on welfare capitalism by the New Right in the 1980s. The concluding chapter examines the causes and consequences of the fervent adherence of Americans to liberal ideology, the origins and philosophical bases of that set of beliefs, and its future prospects.