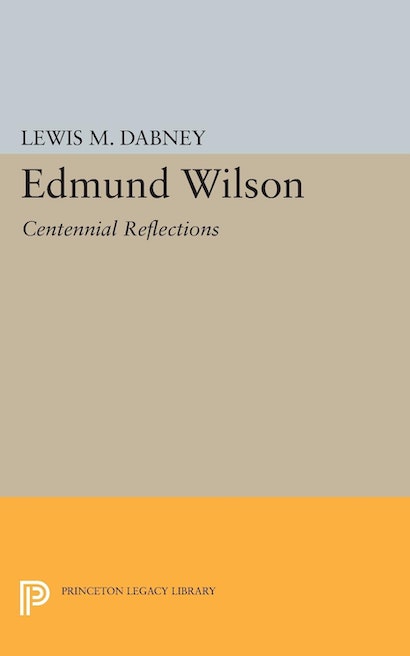 Edmund Wilson helped shape American letters from the early 1920’s through the mid-’60s. He remains a presence in our literary culture, and his accounts of art and society have influenced a younger generation of readers and thinkers. This vibrant collection emerges from symposiums held at the Mercantile Library and at Princeton University in 1995, Wilson’s centennial year. At these occasions, prominent critics, literary journalists, and historians aired a variety of points of view about his work and personality. Assembled and edited by Lewis Dabney, this book shows new intellectual voices interacting with veterans who knew Wilson and his times.

In the first part, Morris Dickstein, Jason Epstein, Barbara Epstein, David Bromwich, Jed Perl, and Mark Krupnick comment on Wilson’s development as a critic, his faith in reason and his personal romanticism, his version of modernism and eclectic interest in the arts, as well as the sources of his later writing about Judaism. In the second section, a reading of the journals from The Twenties to The Sixties by Neale Reinitz and a chapter from Dabney’s biography-in-progress lead to the reminiscences of Elizabeth Hardwick, Jason Epstein, Mary Meigs, Roger Straus, and Alfred Kazin, as well as Michael C. D. Macdonald, the son of family friends, and the Dead Sea Scrolls scholar James Sanders giving an authentic sense of Wilson’s place in the literary life. Two of his important works, the study of the Marxist intellectual tradition in To the Finland Station and of Civil War literature in Patriotic Gore, anchor the discussion in the third part. Here David Remnick and Daniel Aaron debate his radical commitment, joined by Arthur Schlesinger and others in a vigorous exchange, and Randall Kennedy’s attack on Wilson’s neglect of nineteenth-century black writers provokes a response from Toni Morrison. Instructive essays by Andrew Delbanco and Louis Menand, and discerning comments by Paul Berman and Sean Wilentz round out the volume.

"Edmund Wilson, who epitomized the man of letters for this century and who relished his role as the nation's leading literary curmudgeon and dictator, comes brilliantly to life in this wide-ranging collection of essays edited by his biographer, Lewis Dabney. Not only do we get acute explorations of Wilson's criticism but incisive pieces on his other writing and on aspects of his long disorderly life. Professor Dabney, his contributors, and the Princeton University Press are to be congratulated for this celebration of Wilson as he triumphantly passes his centennial and doggedly sets sail for another century."—George Core, Editor, The Sewanee Review

"Edmund Wilson ... comes brilliantly to life in this wide-ranging collection of essays.... Not only do we get acute explorations of Wilson's criticism but incisive pieces on his other writing."—George Core, editor, The Sewanee Review