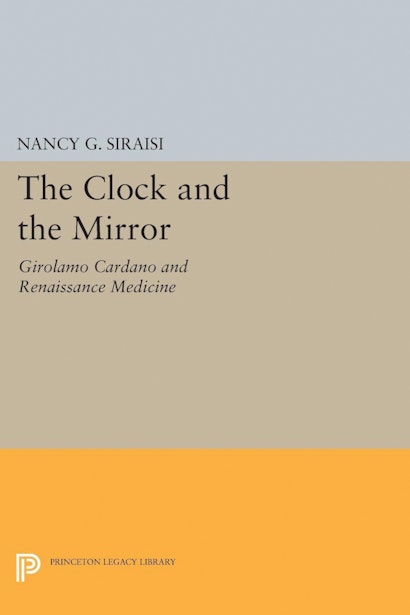 Girolamo Cardano (1501-1576), renowned as a mathematician, encyclopedist, astrologer, and autobiographer, was by profession a medical practitioner. His copious writings on medicine reflect both the complexity and diversity of the Renaissance medical world and the breadth of his own interests. In this book, Nancy Siraisi draws on selected themes in Cardano’s medical writings to explore in detail the relation between medicine and wider areas of Renaissance culture.

Cardano’s medical advice included the suggestion that “the studious man should always have at hand a clock and a mirror”—a clock to keep track of the passage of time and a mirror to observe the changing condition of his body. The remark, which recalls his astrological and autobiographical interests, is emblematic of the many connections between his medicine and his other pursuits. Cardano’s philosophical eclecticism, beliefs about occult forces in nature, theories about dreams, and free transitions between academic and popularizing scientific writing also contributed to his medicine. As a physician, he greeted two different types of medical innovation in his lifetime with equal enthusiasm: improved access to the Hippocratic corpus and Vesalian anatomy. Cardano presented himself as a practitioner with special gifts. Yet his medical learning remained rooted in the Galenic tradition that he often criticized. Meanwhile, he negotiated a career in a medical community characterized by personal and social rivalries, a competitive medical marketplace, and strong institutional and religious pressures.

Nancy G. Siraisi is Professor of History at Hunter College and the Graduate School of the City University of New York. Her books include Avicenna in Renaissance Italy and Taddeo Alderotti and His Pupils, both published by Princeton University Press, and Medieval and Early Renaissance Medicine (Chicago).

"If one wanted to know just what effect the Renaissance had on medicine, this book would be the place to start. Nancy Siraisi proposes lucidly and elegantly her answer to this important academic puzzle. Her use of Girolamo Cardano's self-revelations makes this the liveliest of works on the famous scholar."—Vivian Nutton, The Wellcome Institute for the History of Medicine

"Girolamo Cardano was an idiosyncratic man in an idiosyncratic age, and Nancy Siraisi has traced the processes of accommodation between the drive for invention and the reliance on convention so prevalent to Cardano and his century. Her story of Cardano's role in the history of medicine bridges the history of the body, Renaissance occultism, and the emerging science of experimental philosophy and probabilistic knowledge. Siraisi has read Cardano with great intelligence and erudition, and is a sure guide through the paradox and particulars of his age."—Mary J. Voss, Princeton University