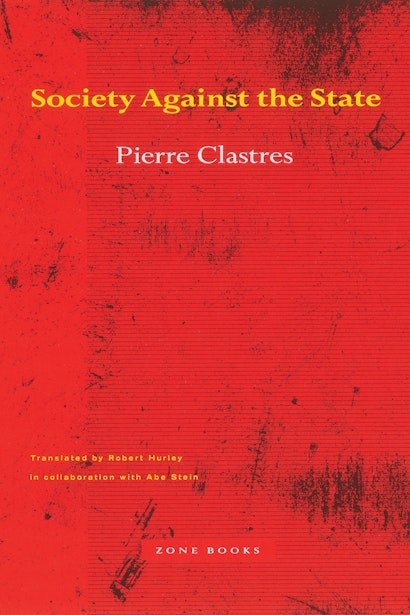 In this seminal, founding work of political anthropology, Pierre Clastres takes on some of the most abiding and essential questions of human civilization: What is power? What is society? How, among all the possible modes of political organization, did we come to choose the monolithic State model and its accompanying regimes of coercion? As Clastres shows, other and different regimes do indeed exist, and they existed long before ours — regimes in which power, though it manifests itself everywhere, is nonetheless noncoercive.

In such societies, political culture, and cultural practices generally, are not only not submissive to the State model, but they actively avert it, rendering impossible the very conditions in which coercive power and the State could arise. How then could our own “societies of the State” ever have arisen from these rich and complex stateless societies, and why?

Clastres brilliantly and imaginatively addresses these questions, meditating on the peculiar shape and dynamics of so-called “primitive societies,” and especially on the discourses with which “civilized” (i.e., political, economic, literate) peoples have not ceased to reduce and contain them. He refutes outright the idea that the State is the ultimate and logical density of all societies. On the contrary, Clastres develops a whole alternate and always affirmative political technology based on values such as leisure, prestige, and generosity.

Through individual essays he explores and deftly situates the anarchistic political and social roles of storytelling, homosexuality, jokes, ruinous gift-giving, and the torturous ritual marking of the body, placing them within an economy of power and desire very different from our own, one whose most fundamental goal is to celebrate life while rendering the rise of despotic power impossible. Though power itself is shown to be inseparable from the richest and most complex forms of social life, the State is seen as a specific but grotesque aberration peculiar only to certain societies, not least of which is our own.

Not for sale in the U.K. and British Commonwealth, South Africa, Burma, Jordan, and Iraq.