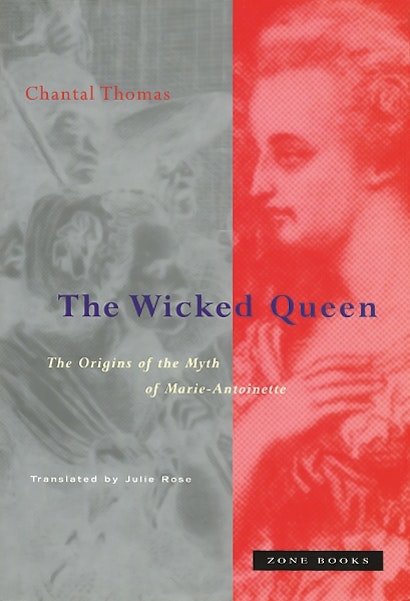 The Wicked Queen is not a biography of one of the most infamous queens in history. Rather, Chantal Thomas presents the history of the verbal and visual representations of Marie-Antoinette, the history of her mythification. Almost as soon as Marie-Antoinette, archduchess of Austria, was brought to France in 1771 as the bride of Louis XVI, she was smothered in images.

In a monarchy increasingly under assault, the charm and horror of her feminine body and her destructive political power as a foreign intruder turned Marie-Antoinette into an alien other — the bestial “arch-tigress of Austria.” Working as a historian and writing like a novelist, Thomas reveals how Marie-Antoinette came to symbolize the marginalization and negation of women in French society before the French Revolution.

In a series of pamphlets written between the 1770s and her death in 1793, Marie-Antoinette was portrayed as a frivolous and extravagant spendthrift and lesbian, an incestuous and bloodthirsty libertine, a poisoner and infant murderess. “Through her wickedness,” writes Thomas, “she caused the Revolution.”

In her analyses of these anonymous pamphlets, seven of which are included here in translation for the first time, Thomas reconstructs how the pamphleteers’ mounting hallucinatory and libelous discourse culminated in the inevitable and physical destruction of what had become the counterrevolutionary symbol par excellence. The Wicked Queen exposes the complex and complicated history and power of an image, the elaborate process by which the myth of Marie-Antoinette emerged as a crucial element in the successful staging of the French Revolution.

"The Wicked Queen…makes the excellent and essential point that no attempt should be made, as was sometimes done in the past, to link these [pornographic pamphlets] with their real-life subject, either as ‘outrageous slander’ or as her ‘just deserts.’"—New York Review of Books

"…lively and imaginative examination of the public personae of the French Queen."—London Review of Books

“Chantal Thomas offers a brilliant and provocative analysis of the techniques of scurrilous pamphleteering and shows how ever aspect of Marie-Antoinette’s life - from her hairdos to her choice of female friends - became fodder for the pornographic imagination. A lively and original book, The Wicked Queen opens a window onto a timely and always controversial issue: the uses of pornography to undermine a political regime.” —Lynn Hunt, author of The Invention of Pornography